People expect textbooks to provide trainees in medicine and psychiatry with up-to-date information about biological illnesses. However, when it comes to ADHD, some researchers suggest that textbooks provide inaccurate and misleading information.

Researchers in the Netherlands, led by Sanne te Meerman at Hanze University of Applied Sciences, wanted to discover how textbooks portrayed the neurobiology of ADHD. According to the authors:

“This study has clarified that one of the premises of the worldwide prescription of psychostimulants and medical treatment of ADHD — abnormally developing brains — is far too simplistic, yet it is often presented in this fashion in academic textbooks.”

They examined 43 textbooks that were currently in use by universities in the Netherlands. The researchers analyzed the language used to describe the neurobiology of ADHD, and whether this comported with the current state of scientific evidence.

The current scientific consensus regarding the neurobiology of ADHD is exemplified by the response in the research community to the publication of a 2017 study in the top-tier medical journal Lancet Psychiatry, which overstated its conclusion that ADHD is a brain disorder.

That study, by Martine Hoogman and other researchers, included statistical errors as well as misleading statements about the results. This led to intense scrutiny by expert researchers such as Allen Frances (chair of the DSM-IV task force) and Keith Conners (who performed pioneering research on methylphenidate, and after whom the Conners scale for ADHD diagnosis is named).

Ultimately, after researchers circulated a petition to retract the article, Lancet Psychiatry decided to devote an entire issue of their journal to researchers rebutting the claims made in the original article.

The researchers in the original article claimed to find brain volume differences between children with ADHD and “healthy controls.” However, the articles written in the follow-up issue illuminated the errors in that research.

For instance, Allen Frances wrote a response in Lancet Psychiatry with Sanne te Meerman and Laura Batstra, as well as Keith Conners. They state that the conclusion reached by Hoogman was “wildly speculative and dangerously misleading at a time when ADHD is already overdiagnosed and overtreated with medication in high-income and middle-income countries.”

Researchers, after re-analyzing the data, wrote in Lancet Psychiatry, “We found no significant difference between individuals with ADHD and those in the control group in any of the investigated areas of the brain when IQ difference is controlled for.”

What’s in the Textbooks?

Only one textbook chapter admitted that identifying brain volume differences was diagnostically meaningless. None of the textbooks mentioned the methodological limitations in the neurobiological research they discussed.

te Meerman suggests that “journalists and researchers may have mutual benefits for simplifying and overstating findings. These benefits include standing out amidst the fierce competition for publications and readership among authors, scientific journals and newspapers. However, such dissemination has important implications for influencing how audiences, such as parents, teachers and (health care) professionals, perceive and respond to children’s behavior.”

After all, studies (including this one in Lancet Psychiatry) have found that the youngest children in a classroom are much more likely to be given a diagnosis of ADHD—and to receive psychiatric drugs—most likely due to the age-related stage of development. Children who are almost a year younger than their peers are often compared to other children in their classroom without regard to a 10- or 11-month difference in maturity. te Meerman writes:

“These studies illustrate how educational structures, such as combining children who differ in age up to a year into groups, can contribute to interpreting age‐related variation of behaviors as indicative of a disorder, which often results in them receiving potentially dangerous psychotropic drugs.” 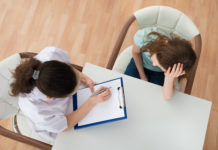