Successful comics can be particularly good at recognizing what hovers below the illusions that most of us accept as unchallenged reality. The late George Carlin exposes one of the myths that many of us accept. He riffs that it is comforting to believe that we have rights, but what we really have are privileges and privileges can be taken away.

Maybe it is an impossible task to create equal rights/privileges for all. Those without power, those who are differently endowed, those who may look differently, act differently, or see, hear, and feel differently, can passively assume that they are entitled to exercise their rights, but soon their lack of power becomes evident.

Many of us have painfully learned that once you are perceived as not adhering to the actions and roles associated with being normal, you are a prime candidate to be captured by a purportedly benevolent mental illness system. Too quickly we learn that it can cost us the loss of our personal agency, along with a stigma (diagnosis) that will have significant impact on the rest of our lives. Our futures will be tethered to a reversal of a hallowed principle of our imperfect court system—you are guilty (mentally ill) until you can prove your innocence beyond a shadow of doubt (sanity).

Because of my own past diagnosis of schizophrenia and my treatments with insulin comas, electroshock, and massive doses of Thorazine and Stelazine, I have spent much of my life trying to understand troubled and untroubled altered states, many of which are called madness. I have wondered how we can support the disempowered marginalized among us who must deal with ableism, sanism, and various misconceptions about disability.

The questions about the loss of our rights speaks best to me in the writing of John Stuart Mills.  In his classic essay On Liberty, written in 1859, he weighed in on the conflict between safety, security, and liberty. In his essay he speaks to a key question of personal freedom: In a democratic state, how can the individual be protected from the tyranny of the majority?  Mills based his essay on one simple principle:

. . . . that the sole end for which mankind is warranted, individually or collectively, in interfering with the liberty of action of any of their number, is self-protection. That the only purpose for which power can be rightfully exercised over any member of a civilized community, against his will, is to prevent harm to others. His own good, either physical or moral, is not a sufficient warrant. He cannot rightfully be compelled to do or forbear because it will be better for him to do so, because it will make him happier, because, in the opinions of others, to do so would be wise, or even right. These are good reasons for remonstrating with him, or reasoning with him, or persuading him, or entreating him, but not compelling him, or visiting him with any evil in case he do otherwise. In the part which merely concerns himself, his independence is, of right, absolute. Over himself, over his own body and mind, the individual is sovereign.

I am currently reading the book Breaking the Code by Walter Isaacson, which describes the new discoveries and possibilities that accompany breakthroughs in gene editing along with its moral and ethical dilemmas. Questions about the benefits and values of diversity are some examples that come to the fore.

An example discussed: If we had a vaccine that would have eliminated polio years earlier, what would Franklin Delano Roosevelt have been like as president of the United States? Would he have even been involved in politics? I think of one of my heroes, Justin Dart, and wonder if he would have become the dogged fighter for disability rights and acknowledged father of the Americans with Disabilities Act (ADA) had he not been stricken with polio.

What would be the unintended consequences of using gene editing to create designer babies? Would we diminish and maybe even lose our capacity for empathy? As it is, there is not an equal playing field, but at least our genetic endowments are determined by nature’s lottery, rather than purchased by the wealthy.

I believe the major sins perpetrated by western mental health treatments are forced confinement, forced psychiatric drugs, and other too quickly celebrated somatic treatments that soon disappoint and are tossed into history’s trash bin. We have a system that treats by containment and drugging 95% of the people labelled with serious mental illness, whereas only 5% so identified may actually require short term containment (the numbers are my subjective estimate).

Hurting emotionally, being confused about life, and feeling trapped and alone do not warrant being locked up and drugged.  Listening with curiosity, empathy, and compassion may be the essential feature of successful alternatives.

Throughout human history, oppressed people and their allies have joined together for common cause. MindFreedom International (MFI) adheres to the principle that each person has the right to make informed choices to the best of their ability and to consult with trusted others for aid in making such choices. 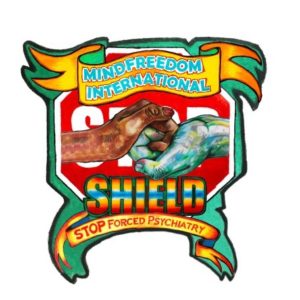 At MFI, we have been using an initiative called Shield to address complaints about forced mental health treatments and harmful acts of control allowed by psychiatric hegemony. Shield is designed to counter the power inequities that confront those who want to challenge decisions that are made for them—those who often find that their input and complaints are ignored.

Those in authority too often operate under the assumption that “for your own good” should be the unassailable guiding force in the lives of those that they treat. However, the opportunity to choose what works best for oneself is instrumental in the possibility of living a life of quality—whether it is choosing what foods we eat or the medicines we must take.

We must not accept that the freedom to choose will continue to be unavailable for some of us.  Of course, we must have genuine information to make good choices, but we also must have the freedom to make bad choices. Knowledge, whether it is about food or drugs, is not stagnant; witness the ever-changing proclamations of what substances are good or bad for you.

For decades, MFI has sent out human rights alerts to support people who have been harmed by human rights violations in the mental health system. The numerous pleas for help that MFI receives by email and telephone are usually about forced confinement, outpatient drugging, and guardianships. Shield campaigns may be as small as a volunteer initiating an inquiry with an institution, or much larger; the level of activity varies according to the needs of the individual.

Our responses to complaints are discussed during regular meetings of the Shield committee. We may guide someone to a local Protection & Advocacy office to find a lawyer for representation at a hearing.  Others might be directed to one of our affiliates to engage with a potential advocate locally. Generally, there will be a discussion to find out what is needed and to decide what is our best advice and support for gaining a successful resolution.

It has been enlightening for me to see how often we find that complaints are resolved when the psychiatric facility learns that a person has outside allies. It seems that when aversive treatments are no longer taking place behind closed doors, when outside light with its potential threat of exposure hangs in the air, there may be a reconsideration of the objection to treatment.

Yet there are those instances where the professional in charge asserts the power inequality of the doctor-patient relationship and is unwilling to re-consider treatment decisions. In those instances where there is no accommodation, we launch a full-scale alert. The alert goes out to all who have signed on to be Shield members, as well as being posted on social media to attract a wider response. The plan is to get as many people as we can to write or call the facility doctors, administrators, news outlets, media, and local advocates.

In our most recent alert, Charles, a 22-year-old man, was diagnosed with schizophrenia and ordered to receive electroshock treatments and a high dose of psychiatric drugs. While we were working with him, he developed involuntary ocular deviations, which commonly occur in acute dystonic reactions to dopamine receptor-blocking drugs.

A psychiatrist ally of MFI generously wrote a free-of-charge affidavit challenging Charles’ schizophrenia diagnosis and the benefits of electroshock, and noting that he did not present a threat to others or himself. In that Shield alert campaign, we had nearly 400 people making phone calls and writing. The shock treatments were stopped, but we are still working on getting him out of a group home and back to living at home with his mother (which is what they both want).

MFI is now in the beginning stages of partnering across disability to create regional Shield networks grounded in informed choice as the bedrock of social justice for people who have been labelled and dismissed. Along with the support of various state Independent Living Centers and the National Council of Independent Living Centers, MFI will be collaborating with Protection & Advocacy organizations and other interested lawyers with the hope of serving more people.

MFI fights for genuine change to occur and believes that it is the experiences of psychiatric survivors that can best raise public awareness. It is the survivors who have lived through the forced interventions and witnessed how coercion gives cover to the inadequacy and false claims of the current medical treatment paradigm.

At MFI we challenge the overly simplistic notion that a diagnosis of mental illness or disability justifies the incarceration of people in psychiatric hospitals, nursing homes, and other congregate living centers where they are segregated from the community at large.

Currently, MFI is striving to expand the frequency and effectiveness of Shield by creating new alliances throughout the United States. We encourage you to look at information about Shield and past actions at https://mindfreedom.org/shield/ and to find out how you can get involved. It puts a face on psychiatric harm and abuse, while offering real support to individuals who are being threatened with forced treatments.

This Wednesday, May 26, at 6:00 PM EST, MindFreedom will partner with “I Love You, Lead On” to host the fifth in an educational series to create cross-disability understanding of common themes and initiatives. This month’s meeting is dedicated to MFI’s plan to expand the reach of Shield.

MindFreedom International is determined to grow into a formidable force that will challenge the too-frequent indiscriminate violations of one’s personal rights.