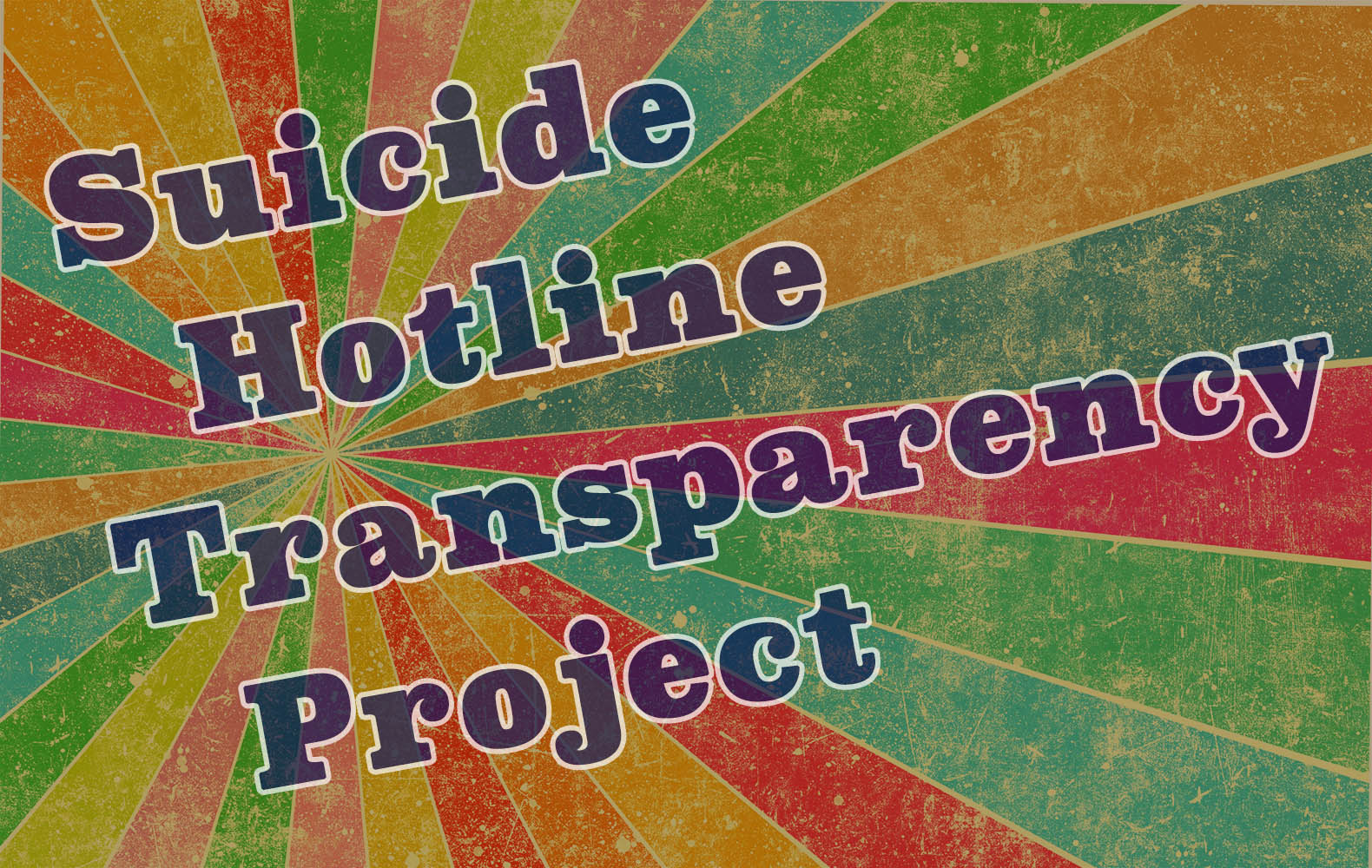 The “Suicide Hotline Transparency Project” was born out of the belief that creating transparency and public access around suicide hotline intervention and call tracing policies should be a priority. This would provide people in suicidal distress with the resources and information they need to make an informed choice about hotlines to call, particularly since call tracing, for some, can lead to traumatizing, or even lethal, interventions.

In November 2020, journalist Rob Wipond published an article on Mad in America titled Suicide Hotlines Bill Themselves as Confidential—Even as Some Trace Your Call. This article investigated US National Suicide Prevention Lifeline (NSPL) centers and found that they covertly trace tens of thousands of calls, while claiming to be confidential lines. This practice can result in nonconsensual intervention with police forcing themselves into homes and even workplaces. In these cases of “active rescue,” callers can be taken to psychiatric hospitals without consent and held there, where they lose many of their ordinary civil and due-process rights. Please also see Rob Wipond’s latest article on this subject, Roll-out of 988 Threatens Anonymity of Crisis Hotlines, which describes how invasive surveillance of personal information and geolocation tracking of all callers could soon become default aspects of most crisis lines around the country.

Many individuals experiencing distress in vulnerable communities, such as migrants, sex workers, trans individuals, African Americans, Indigenous people, and other people of color can experience even worse. These interactions can result in police violence and even death. According to a Washington Post database of fatal U.S. shootings by on-duty police officers, more than 1 in 5 people shot in police encounters are reported as having a “mental illness.” Trans Lifeline’s Cops Out of Crisis advocacy effort gathers together several studies showing the detrimental effects of these policies on those in suicidal distress, including a study of the effects of coercion on future suicide attempts.

Non-transparency around tracing policies, coupled with the many problems in the science behind NSPL intervention policies which determine “imminent risk,” create a potentially dangerous situation for some.

In his article, Wipond writes:

A 2017 meta-analysis found that expert ability to predict suicide barely beats random chance, and “has not improved across 50 years of research.” A 2018 review found that suicide risk-assessment methods all produce an “unacceptably high false positive rate.” A 2016 study of NSPL centers acknowledges that “an empirical foundation for warning signs of imminent suicide risk is lacking,” and the whole concept of imminent risk “is fraught with problems such as lack of clarity and imprecision.” SAMHSA-NSPL documents show a history of “inconsistent” assessments; one study of just four NSPL centers found that the number of times police were sent out ranged from 0.5% to 8.5% of calls.

Mad in America’s goal was to offer a list of lines that did not intervene or trace calls without consent under any circumstances. We began by publishing a community call for information about lines that do not trace or intervene without consent. We spoke at length with several lines who are dedicated to protecting communities who are threatened by these practices, including Sera Davidow from the Wildflower Peer Support Line; Vanessa Green, the founder of Call Blackline; and Yana Calou from the Trans Lifeline’s Cops Out of Crisis advocacy effort.

Read our first interview in the Suicide Hotline Transparency Project series with Vanessa Green the founder of CallBlack Line and listen to the podcasts interviews with Sera Davidow from the Wildflower Peer Support Line and Yana Calou and Robert Jahmil from the Trans Lifeline.

Maggie Leppert, referred to us from the Wildflower Alliance, volunteered to help with the project. Over about six months, Maggie gathered contact information and reached out to as many lines as she could find in the US not yet listed under the NSPL. Intervention policies of NSPL lines, which have been critiqued, would prevent them from being included in this directory, so Maggie collected all known NSPL lines so they could be excluded from her search. You can review the list of all known NSPL lines here (list gathered from their website).

We reached out to a total of 95 lines in the US, besides the 177 lines affiliated with the NSPL, with two rounds of emails attempting to gather answers to the following questions for the purpose of publishing on MIA’s website.

1. Would your line operators intervene or send any type of help under any circumstances without consent?

2. Can you think of any circumstances that your line operators may track calls, send police, or intervene in any way without consent?

3. Do you have anything else you want to add to explain your policies?

The Results So Far

Although the number of lines that responded was small, the results were nevertheless revealing. Of the 95 lines contacted we received 16 answers. Eleven of the 16 said they do trace/intervene without consent.

After regrouping and thinking about how to go forward with such a sparse response, we consulted with Rob Wipond and others, and added Álvaro Gamio Cuervo to our team. We decided to publish the information as it is now and begin a second phase of the project focusing more on awareness and education.

Read our first interview with Vanessa Green the founder of CallBlack Line.

Podcasts include interviews with Sera Davidow from the Wildflower Peer Support Line and Yana Calou and Robert Jahmil from the Trans Lifeline.

Click here to read Maggie Leppert and Karin Jervert’s review of the results of this ongoing survey.

Click here to see the call for art, guidelines, and to submit artwork.

Please stay tuned for more information and contact us if you are interested in contributing to this project.

For the Love and Care of the People: An Interview with Vanessa Green on Call BlackLine Organizing