“In total, drug companies and drug industry-funded patient organizations provided a combined total of £2,197,400.75 (30.2% of all funding received by health-related APPGs) and 468 (of 1,177–39.7%) payments to 58 (of 146–39.7%) health-related APPGs, with the APPG for Cancer receiving the most funding. In conclusion, we found evidence of conflicts of interests through APPGs receiving substantial income from pharmaceutical companies. Policy influence exerted by the pharmaceutical industry needs to be examined holistically, with an emphasis on relationships between actors potentially playing part in its lobbying campaigns.” 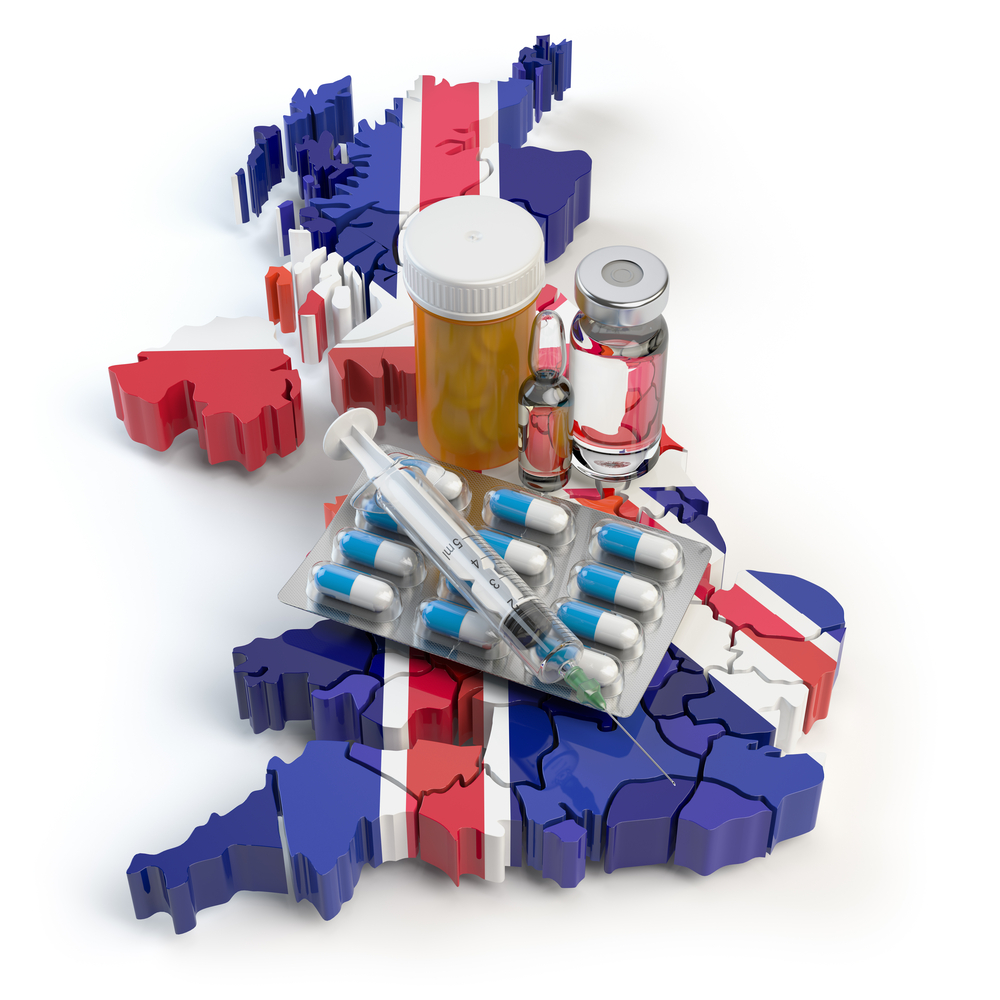 Many researchers have examined the corrupting influence of the pharmaceutical industry on the medical field. For example, the pharmaceutical industry regularly corrupts clinical trials by manipulating scientific data, making ineffective treatments appear effective by hiding and misrepresenting data. This industry also likely pollutes meta-analyses by generating large numbers of studies supporting their product’s use. Additionally, researchers have criticized academic journal editors for undermining the credibility of their journals by allowing authors with significant conflicts of interest to publish opinion pieces.

Research articles are commonly ghostwritten by pharmaceutical company representatives that subsequently bribe influential physicians and psychiatrists to publish the research in their own name, undermining both scientific and academic integrity. These fraudulent articles are likely to be accepted for publication in academic journals, while articles that critically examine these fraudulent studies rarely are. The ability of the industry to dictate exactly what gets researched, how that research is carried out, and who has access to that research has caused some authors to remark that evidence-based medicine is an illusion.

Pharmaceutical industry payments to physicians increase prescriptions as well as Medicare expenditures. Two-thirds of patients see a doctor that has accepted such payments. These payments are commonly made to psychiatrists, likely corrupting “scientific” psychiatric drug trials.

The pharmaceutical industry commonly pushes dangerous, ineffective drugs to the market when more efficacious, safer alternatives are available. Unfortunately, they sometimes achieve this by forcing patients to accept the use of dangerous, expensive, ineffective treatments to access skilled nursing care.

The industry also encourages the off-label prescription of their products to treat illnesses for which their drugs have shown no efficacy, thereby exposing patients to unnecessary, likely futile risks.

The current research begins with an explanation of APPGs. These are informal groups run by members of the UK’s House of Commons and Lords. These groups explore specific topics to facilitate and improve policymaking. Due to their informal nature, the authors believe these groups are perfect trojan horses for pharmaceutical representatives to gain access to lawmakers by acting as APPG secretariats. Using these administrative positions and their financial resources, the pharmaceutical industry could have a tremendous influence on these groups and, by extension, state policies. According to the authors, conflicts of interest resulting from pharmaceutical industry ties to APPGs have not been commonly explored in the academic literature.

The present research examined the payments made from the pharmaceutical industry to 146 health-related APPGs. The authors gathered payment data from two publicly available databases, First, the UK Parliament’s Register of All-Parliamentary Groups, a register that records any payment made to APPGs of more than £1,500 in a calendar year. Second, drug company disclosure reports of payments to patient organizations. Using each of these databases, the authors examined both direct payments to APPGs (in which the donor gives directly to the APPG) and indirect payments (in which the donor gives to a third party, which then gives to APPG). 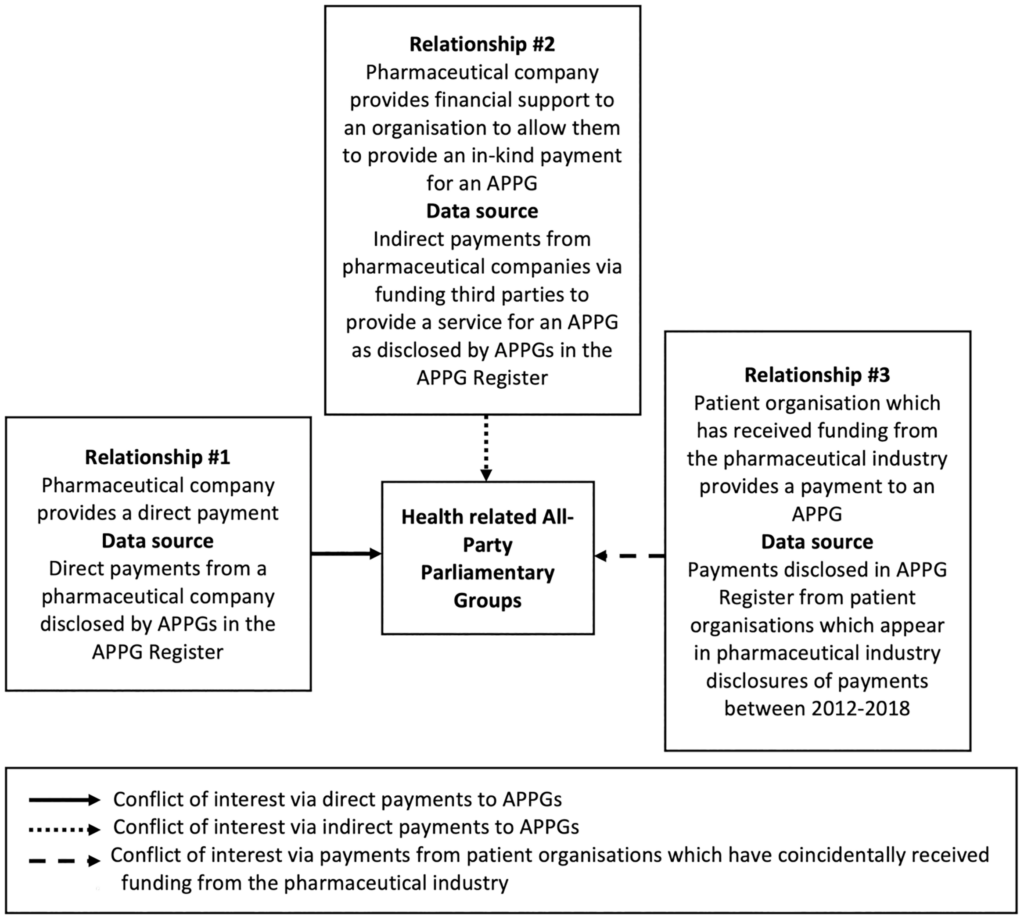 10.8% of all direct donors to APPGs were pharmaceutical companies totaling £858,647.95. APPGs classed as “physical or mental health conditions” received the most individual payments as well as the most money overall. 2 APPGs, Health and Cancer, received half of all direct payments. Direct industry payments came most commonly in the form of sponsoring events and providing membership fees for professional organizations.

57 patient organizations that received payments from the pharmaceutical industry made payments to APPGs. These payments totaled £986,055. Indirect payments from patient groups to APPGs came most commonly in the form of the secretariat and administrative services.

The authors conclude that there is a positive correlation between providing payments to APPGs and being allowed to contribute to their reports. In other words, pharmaceutical companies can buy influence over policy.

The authors make several suggestions they believe could mitigate these conflicts of interest. First, pharmaceutical companies must be required to disclose these payments. Second, all payments, not just those exceeding £1,500, should be reported. Third, payment descriptions should be required for financial payments and expanded for in-kind payments. Last, patient organizations providing payments to APPGs need to disclose any corporate funding they receive publicly. They conclude:

“Making this information easily accessible in one place is crucial given the frequent role of industry-funded patient organizations in APPG activities, evidenced by their numerous in-kind payments, and the risk that the patient voice might speak with a ‘pharma accent’ when involved in policy discussions.”