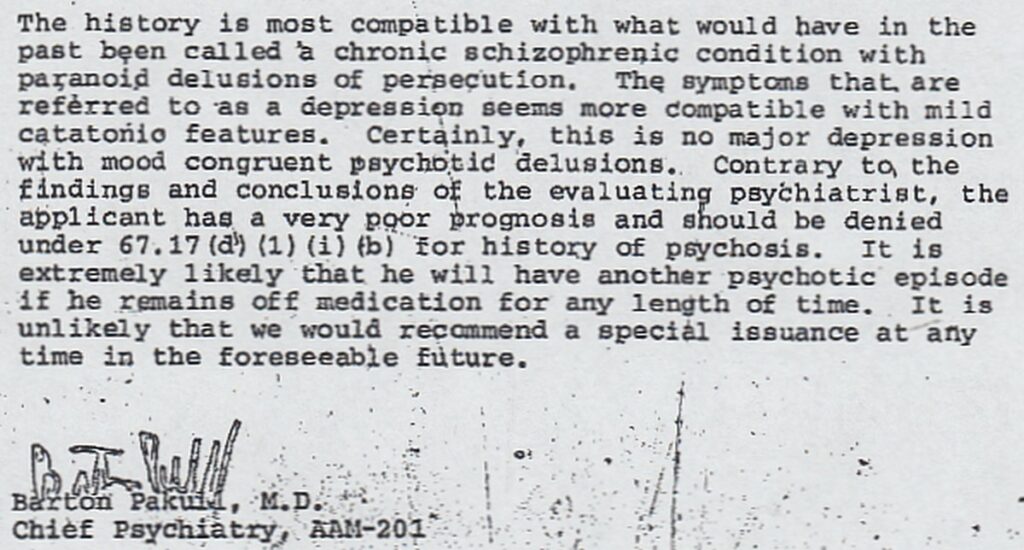 This is what the FAA’s Chief Psychiatrist wrote about me in 1992. That diagnosis is a wound that has festered for 30 years.

Modern airline travel is a miracle in that it is the safest mode of transportation, with 0.2 deaths per 10 billion passenger-miles, while the figure is more like 150 in an automobile. The FAA and aviation regulatory agencies in other countries deserve a lot of credit. Part of the success is due to checking that pilots have health commensurate with their responsibilities. In addition to a pilot’s license, a medical certificate is required to legally fly an airplane as pilot in command.

There are 540,000 pilots in the US. They are often referred to as “airmen” in FAA literature, but 7% are airwomen. There are three classes of medical certificate: First class for airline pilots (43%); Second class for commercial pilots (19%); Third class for private pilots (38%).

Both physical and mental health are of interest to the FAA. For example, some cardiology and diabetic conditions are specifically disqualifying. So is substance abuse or dependence.

In mental health, (1) Psychosis, (2) Bipolar disorder, (3) Personality disorder that is severe enough to have repeatedly manifested itself by overt acts, are all specifically disqualifying.

Buried in the Federal Register are lesser-known restrictions. Under the heading of “Specifically unacceptable diagnoses and or symptoms” are (1) Psychosis, (2) Suicidal ideation, (3) History of electro convulsive therapy (ECT), (4) Treatment with multiple antidepressant medications concurrently, (5) History of multi-agent drug protocol use (prior use of other psychiatric drugs in conjunction with antidepressant medications).

Before 2010, no use of psychotropic drugs was allowed by pilots. It was possible to stop flying and take antidepressants and then resume flying after a long recovery following suspension of antidepressant use. After 2010, it was possible to obtain a special issuance medical certificate allowing the strictly controlled use of a few SSRI antidepressants: Fluoxetine (Prozac); Sertraline (Zoloft); Citalopram (Celexa); Escitalopram (Lexapro).

This was billed as a watershed event. The FAA’s policy change permitting use of SSRI antidepressants in 2010 has been touted as to how much has changed in aviation psychiatry. However, statistics show that pilots can rarely take advantage of this change in policy. Here are the SSRI special issuance statistics from the FAA’s 2018 Aerospace Medical Certification Statistical Handbook:

It is very difficult to obtain an SSRI special issuance. It seems backward that it is “easier” for a first-class pilot to get an SSRI special issuance than for a third-class pilot. If these statistics are correct, I believe some policy changes are in order. I suspect the onerous and expensive application procedures are to blame. You would have to convince me that statistically, the safety threat from third-class pilots justifies this result. There is very little difference in regulations and decision points between a first-class medical and a third-class, despite the very different levels of responsibility these pilots take on.

Filing for an SSRI special issuance is a difficult, time-consuming, and expensive process. You submit a statement and records, have a face-to-face meeting with a “Human Intervention Motivation Study” (HIMS) aeromedical examiner, submit reports from the treating physician and board-certified psychiatrist. A battery of at least 11 psychological tests is required. There are many places to fail. If successful, you are entered into a periodic monitoring program.

The Germanwings murder/suicide did not cause a “cracking down” on airmen with psychiatric conditions so much as it reduced the appetite for further liberalization of policy. There were calls for less medical confidentiality in some European states. There was never much medical confidentiality in the US with the FAA in the first place. If they asked for records, you needed to provide them. Following Germanwings, there are now requirements for two people in the cockpit at all times, and there was a call to promote confidential pilot support groups.

The Germanwings report also pointed out that there is widespread noncompliance among pilots on mental health matters. They do not always report treatment. Some take psychotropic medications without the knowledge of the FAA. Some do not seek treatment at all because it would be a reportable event.

The FAA and their counterparts in other countries insist that pilots should feel free to seek mental health help and that their organizations are tolerant and committed to recertifying pilots for flight status.

In December of 2021, the University of North Dakota held a summit on mental health in aviation. It was held in memory of John Hauser, an aviation student at UND who committed suicide in a light plane in October of 2021. A letter that his parents received after his death told of his mental health struggles and how he feared the FAA aeromedical system. He felt that his life was not worth living without the ability to fly.

Speakers prominent in the aeromedical community encouraged students in the traumatized UND aviation community to seek help if they needed it. They claimed that the FAA was committed to getting them back in the air, safely. FAA Administrator Steve Dickson minimized the possibility of medical rejection, calling it a “perceived” risk.

Actually, John Hauser’s perception of the risk was correct. The mere thought of suicide is an absolute deal-breaker with the FAA. Had he sought treatment, he wouldn’t be flying Cessnas, let alone Boeings. His “ideation” would never be stricken from his record. Urging the aviation students at the summit to seek help if they need it is a noble cause, but it sounds hollow in this context.

Australia has a very different take on mental health in aviation. They were allowing psychotropic medication by pilots starting in 1987, decades before the United States, and found that it could be done safely. They also have a very different attitude towards psychiatric conditions and symptoms. Where the US has hard and fast stop points, in Australia these issues are more negotiable case to case. You are either “more likely” or “less likely” to be certified depending on symptoms and treatments. The FAA is not in favor of the “Australian model.”

Forensic psychiatry is exempted from the idea “First, do no harm” linked to the original Hippocratic oath. If the forensic psychiatrist is representing another party, there is no doctor-patient relationship. Even so, I believe ethics demands that they do no gratuitous harm. Misdiagnosing a patient falls into that category in my view. In my case, Yale University held out the diagnosis of schizophrenia as a possibility because they had not reviewed the full records. That is purposely putting on blinders in my mind. The American Academy of Psychiatry and the Law should add the concept of due diligence to its Ethics Guidelines. I believe my situation should be studied in medical schools with forensic psychiatry programs. My book has examples of untruths that may not rise to the level of perjury if stated in court. However, these “clever” statements deserve ethical scrutiny.

My advice to airmen and airwomen is to get legal help before ever discussing your situation with a psychiatrist. There are companies that shepherd applications through the aeromedical system, such as Pilot Medical Solutions, Inc. They will be able to tell your prospective doctor what treatments and information are disqualifying or will delay and add cost to the application. This is all very expensive and not reimbursable by health insurance. However, this path is essential if you are to fully recover from your mental illness. By fully recover, I mean return to flight status as well as deal with your mental health issues. This is interfering with the doctor-patient relationship of course, but it must be done to keep the doctor from treating you in a way that is disqualifying. Presumably, the doctor will overrule these restrictions if the situation is dire. Make sure the doctor understands these issues specific to aviation before contracting with him or her. I would even stay away from mental health apps on your cell phone.

An airman or airwoman needs to be careful about what information is divulged to the psychiatrist, especially around the subject of suicide. Suicidal ideation is an unmovable obstacle to certification. No friends or family members should talk to your psychiatrist. These secondary actors can be a source of damaging information that will be transcribed into your record. The fate of your application may depend more on anecdotal information than on diagnosis and prognosis. The regulations are broad enough that the FAA can stretch you into any category if there is some specific information in your records they might find embarrassing.

It is fine to decry the stigma around mental health and claim that we need to reduce it. However, FAA regulations are built around stigma. A regulator cannot go outside the public’s views and the public embraces the stigma. I cannot fault FAA regulators for excessive denials since they are protecting the FAA and their personal positions. My view is that the system is optimized more for bureaucratic safety than physical safety. The result will be more tragedies like John Hauser’s.

The mental health regulators at the FAA are too close to the situation to create fair, ethical and proportionate regulations. They have a defensive posture that may be at odds with these goals. John Hauser’s suicide was a failure of aeromedical policy, not because it occurred in an airplane, but because John felt he could not get help. There are tragedies on the ground attributable to FAA regulation that they will never be blamed for.

To some extent, regulations are put in place to protect the FAA and their staff. Any such policy can be justified by friendly academics and professional organizations. To circumvent these tendencies, I propose that the National Institute of Mental Health form a committee to study these issues independently. Freed of the personal burden of regulation they can suggest sensible policies that will promote medical ethics as well as safety both in the air and on the ground. Bureaucratic safety should not be a consideration.

Full disclosure: I am a disgruntled want-to-be airman. I have written about the denial of my third-class medical certificate and a number of other subjects in my memoir, Can’t Be Trusted. It is about engineering, aviation and mental health. I was diagnosed as having schizophrenia by the Chief Psychiatrist of the FAA. The diagnosis was supported by a prominent psychiatrist on the Yale University letterhead. This was not forensic psychiatry’s finest hour. The book outlines the dishonesty of the process but is not consumed by it.

I will never achieve my dream to fly a light airplane solo. Flying is a privilege, not a right. I do have the absolute right to be critical of the FAA, Yale University, and forensic psychiatry generally. And I can ask: Is the system safe? Is it effective? Is it practical? And especially, is it ethical?