When people look at my poster, their most frequent response is, “Wow! How can I get my own records? I have always wanted to have mine!” I tell them, “Just do it! And be persistent. Even if the contents turn out to be upsetting, I doubt you will ever be sorry.”

This is the story behind how I finally received mine and what I did with them:

I had been wishing to get my hospital records for a very long time. I felt deeply that they belonged to me as they were words written about me during a hellish three-year period in my adolescence. I was certain that they would be filled with outrageous statements, and I desperately wanted to read and respond to them someday.

I was finally released from the last hospital in 1963, and it wasn’t until 1978 that I began my search in earnest. During the intervening years, I had been finishing college, marrying, and raising four young children. Although I managed to keep all of those hospital experiences safely compartmentalized away so I could raise my children with warmth and kindness, believe me, the retrieval of my records was never far from the surface.

In early 1978, shortly after meeting my fantastic fellow comrades (Judi Chamberlin, Dan Fisher and David Oaks), I was inspired to start by politely writing to the directors of each of the four different hospitals where I had been locked up: Baldpate Hospital in MA, The Menninger Clinic in KS, Massachusetts Mental Health Center in MA, and Westborough State Hospital in MA. Weeks went by, and I heard nothing. I wrote again. I waited.  Again, I got no response.  I even considered flying to Topeka, Kansas, to storm that psychiatric barricade and demand my records in person.

Since I was then a single parent with four young children and dwindling finances, I calmed myself and talked it all over with my trusted and dear therapist, Lee. He had saved my life back in 1963 when, by chance, I first met him the night before I was sent to Westborough. He was a young resident and the only person during those three years who had looked me in the eye and smiled and was genuinely kind.  He gave me hope.  He told me there was nothing the matter with me that had not been caused by the abuses in the hospitals: combined insulin/ECT without anesthesia, seclusion, restraints, molestation, masses of Thorazine, etc.

After meeting with Lee from time to time over the years, in 1978, after my failed letter-writing campaign, we planned a new record-seeking strategy.  He wrote to all four hospital directors. It was difficult for me to give the power over to him, but he seemed to be my last, best hope. In 1975, he had become the Commissioner of Mental Health in MA so he clearly had the power, which I was sadly lacking, and he generously used it to help me. Because of his status and powerful stationery, he heard back from everyone except Baldpate.   Some of them were only a few pages of summaries, which was annoying, but when he received them he gave them to me.  Finally, during the spring of 1978, since Baldpate had ignored him, Lee made an appointment for us to drive out there.  He told them he wanted us to read the records together, and, since he had been the commissioner, I am sure they felt forced to let us come. I had been talking for months about wanting to steal my records so, on the drive out, I showed Lee that I had brought a briefcase and explained that I had every intention of stealing the pages.  I wasn’t sure how I would manage it, but I knew I could figure it out once there.

I still remember the day as if it were yesterday. It was a bright blue, sunny day, the trees and flowers were in full bloom, and I was feeling full of hope and confidence. When we arrived at this desolate location in the country an hour outside of Boston, it was a time-travel experience for me. I had not been there since 1961, and the big red “farmhouse” still remained, looming over the grounds. We were ushered into a small office, far from the desolate cinder-block unit where I had been subjected to the combined insulin/ECT.   There were two chairs and a little table between us where the thick folder with my records sat – my huge and seemingly glowing hidden treasure!  We were at first left alone together to read them, and we decided that I should start reading and then pass each page to Lee.  Soon, however, every few minutes an official would nervously interrupt us by opening the door and asking if we wanted more coffee. The records were filled with atrocious, labeling and demeaning words about me, even more disgusting than I had ever anticipated. And, with growing intensity, I wanted to steal every single page from that house of horrors and report the atrocities all over the world.

Finally, after more than two hours of reading, Lee and I had a conversation about how hard they were making it for me to actually commit my theft.  He said he wanted to go to the bathroom and told me to feel completely free to do whatever I wished with the papers while he was out of the room. What an advocate he was! But, at that moment I was overcome by his genuine generosity and kindness and fully aware that he might get into serious trouble if I were to steal the entire record. I simply didn’t feel I could put him at risk, so when he returned from the bathroom I explained that I had slipped every other page into my briefcase. I paid special attention to picking the most egregious ones, making sure to leave enough bulk so they would not notice, and they didn’t. We drove back to Boston. I was elated, and Lee was the good sport and true advocate that he had been for so long.

I spent many hours and weeks and months reading the pages over and over, trying to make sense of every notation, every diagnosis. Finally, I bought a box, decorated it with flowered paper, arranged the pages neatly inside, and tied it up with a pale blue satin ribbon.  I kept it on the top shelf of my bedroom closet, where it stayed for years – until October 11, 1991!

That was the date that Anita Hill was called to testify before the Senate Judiciary Committee in reference to the appointment of Clarence Thomas to the Supreme Court. She claimed he had made unwelcome sexually provocative comments to her when they worked together at the Department of Education and the EEOC.  I believed her! Anita was treated dismissively and poorly by the senators, and her treatment put me into high action. I went to my closet, took down my hospital records and proceeded to go through every single page with a fine-tooth comb. The next day, I took the pages and copied them all several times. I then cut out the pertinent, disgusting and demeaning comments and assembled them all on a huge poster board, which I had laid out on my bed. I designed it using the typed comments, photos from my childhood, and several small sections from op-ed stories I had written which had been published in newspapers.

It took several days of moving the pieces around until I felt completely satisfied. I then shopped around and found a great radical union press, which was willing to print 1,000 copies, way back before digital. The folks at Red Sun Press in Jamaica Plain, MA, were wonderful! I felt respected, they took my poster seriously, and I was thrilled! 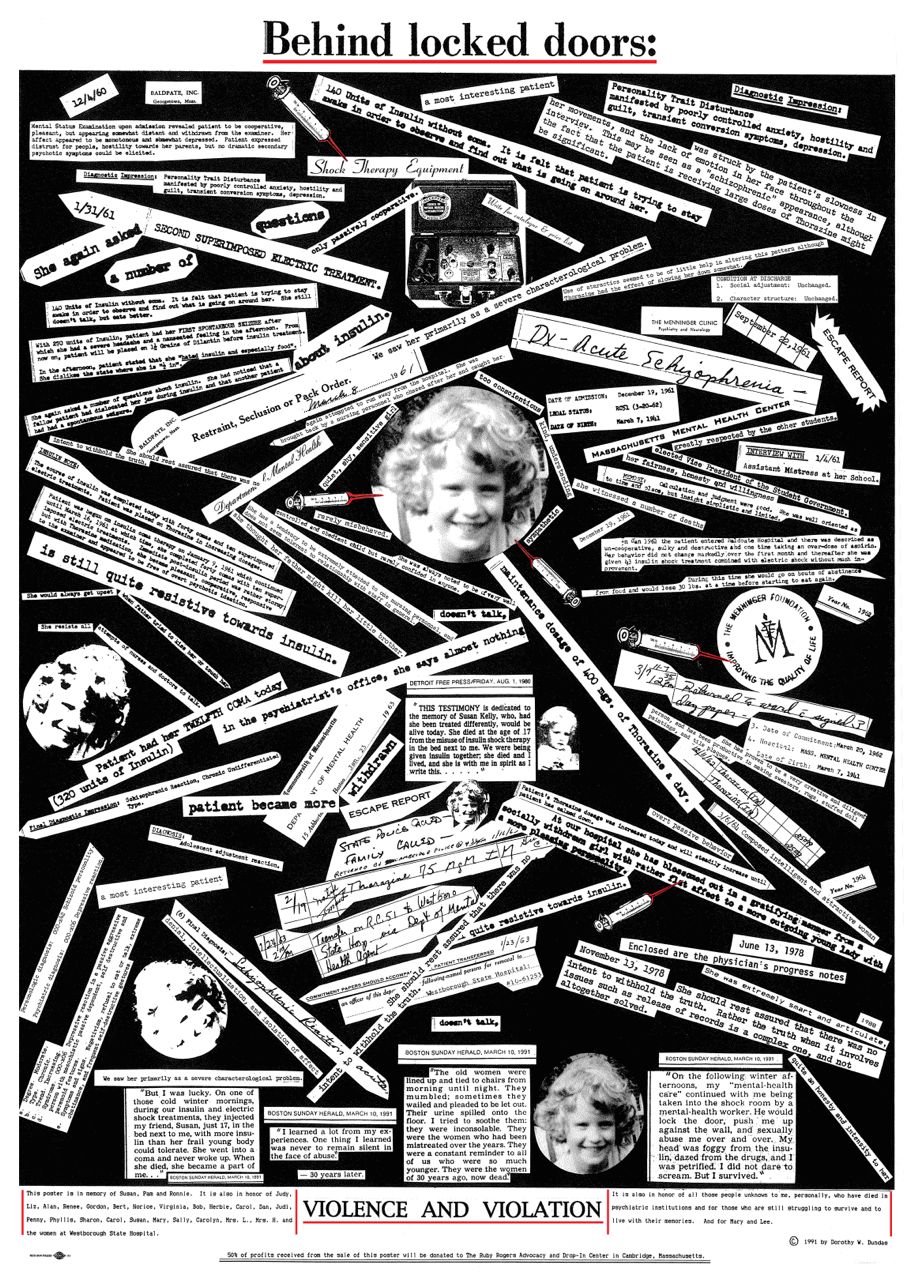 I then began showing, selling and giving it away at conferences.  A dear and close fellow comrade bought the first twenty copies in a true gesture of solidarity and generosity.  It was finally registered with the U.S. Copyright Office on April 25, 2007. I mailed one to The Museum of Modern Art in New York City as someone had once told me that they keep all art which is given to them. I sent a letter of explanation, asking them to consider having a show of art by people who had been locked up in mental institutions, and they acknowledged receiving it. A framed copy hangs in the history exhibit at SAMHSA.  I gave one to my internal medicine doctor who just recently told me that it hangs on the back of her office door. She is now a dean at Harvard Medical School so perhaps it is having a positive influence on future doctors there. Two years ago, I had three large fabric, plastic-laminated copies made for using at marches and demonstrations. One of them now hangs in the office of Digital Eyes Film.

In the end, this poster has given me a great deal of satisfaction. I feel it is my personal megaphone from the top of the Empire State Building, shouting out to the world:

THIS IS WHAT HAPPENED TO ME and THIS MUST STOP!!!

Dorothy Dundas at the 2014 APA conference

Dorothy Dundas tells the story of creating the poster