It has become increasingly mainstream to criticize psychiatry for its corruption by drug companies, invalid diagnoses, lack of long-term treatment effectiveness, and other scientific failings. The recently published book Outside Mental Health: Voices and Visions of Madness reminds us that perhaps the most pathetic aspect “inside mainstream mental health” is how simplistic, boring, and reductionist it is—when our natures are so very complex, fascinating, and non-reductionist. Outside Mental Health restores the full range of color to our humanity. 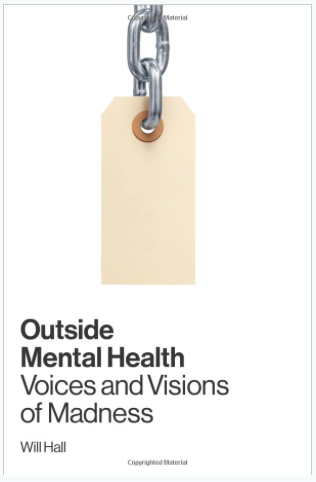 Outside Mental Health is authored by radio host and therapist Will Hall, who as a young man had been diagnosed with schizophrenia. The central question Hall asks is: What does it mean to be called crazy in a crazy world?

This central question leads to specific questions that include: What does an “altered state” mean, and can it be terrifying but also exhilarating and illuminating? Is “hearing voices” really a symptom of illness or simply another dimension of our humanity? How much does context affect the experience of illicit and psychiatric psychotropic drugs? What is the relationship between modern art and what is commonly called “psychosis”? How can jazz, punk, and political activism help people who have been diagnosed with schizophrenia and bipolar disorder? And what egalitarian alternatives outside of mainstream mental health have been found to be far more helpful for people experiencing altered states?

The answers Hall receives to these and other questions in more than 60 interviews and essays from ex-psychiatric patients, as well as scientists, journalists, artists, and dissident psychiatrists and psychologists create a new conversation that can help transform society into a truly more inclusive one that values the talents of those who are now alienated, stigmatized, and marginalized.

What I observed in my professional training is that the earnest desire of most psychiatry residents, clinical psychology and social work graduate students, and others training to become mental health professionals is to learn how to help people who are struggling with severe emotional difficulties. The tragedy is that the educational component that would be most helpful for them is routinely missing from training.

This missing component consists of listening to—and ideally becoming friends with—people who once were diagnosed with bipolar disorder, schizophrenia, and other psychoses but who are now fully functional and can articulately describe how they experienced their altered states and what was helpful. Outside Mental Health goes a long way to filling that void.

“Outside Mental Health,” Hall tells us, “is a call to rethink madness and our responses to it, not to neglect those in pain. Human suffering and madness are real. People do lose touch. During my time of deepest torment, I was so incapacitated and impaired that a disability check and housing subsidy were lifelines to survival. As much as I want to change the mental health system, I am grateful for the support it did give me.”

Hall has not been in a mental health facility during the past fifteen years, and he no longer receives disability checks or uses psychiatric medication. But don’t stereotype Hall as an anti-drug zealot, as he states: “Nor do I demonize medications, as harmful as they can be. I have seen meds help a wide diversity of people, and I embrace a harm reduction view, advocating for each person to find their own way.”

Outside Mental Health’s collection of interviews and essays include scientists, journalists, and doctors who, like myself, came to rethink a good part of what we had been taught in our professional training. Similar to most mental health professionals, my encounters in training with people diagnosed with serious mental illness were in psychiatric hospitals (and, in my case, for two years working as a therapist in a psychiatric emergency room); and such clinical experiences confirmed the bleak picture conveyed in psychopathology textbooks. Most mental health professionals in training see patients diagnosed with psychosis who regularly relapse into dysfunctional states that create chaos and anxiety for themselves and their families.

So, it does not surprise me that one of Hall’s interviewees, ex-patient Eleanor Longden (author of Learning from the Voices in my Head and currently a doctoral researcher) reports to Hall that she was told in her psychiatric hospitalization, “You would be better off with cancer, because cancer is easier to cure than schizophrenia.”

What most mental health professionals in training don’t see are people who had been diagnosed with severe mental illness but who ultimately reject their diagnostic labels and standard treatments and go on to have satisfying lives. Outside of my mental health professional training, I discovered this group of people, some of whom are interviewed in Outside Mental Health; and it is from them that I have learned how harmful autonomy-depriving treatments can be and how mutual aid, collaboration, and autonomy-encouraging approaches can be positively powerful.

More mental health professionals should also be asking Hall’s question: What does it mean to be called crazy in a crazy world?