From NBC News: “Mental health has become a crisis among America’s youth, and experts say the unique challenges and needs of young men are not receiving enough attention. Doctors, teachers and family members may not recognize the symptoms of depression, which in men can include anger, irritability and aggressiveness, according to the National Institute of Mental Health. Men are also less likely than women to ‘recognize, talk about and seek treatment’ for depression, which is sometimes stereotyped as a women’s problem, the agency said.

While teenage girls attempt suicide more often than teenage boys, according to the American Foundation for Suicide Prevention, boys are more likely to die by suicide. Suicide rates for teenage boys and girls rose steadily from 2007 to 2015. In 2015, there were 1,537 suicides documented for boys ages 15 to 19 and 524 for girls, according for the Centers for Disease Control and Prevention. […]

A recent national survey commissioned by Plan International USA, part of a global network of organizations focused on ending poverty, polled over 1,000 youth ages 10 to 19 and found that a third of boys thought society expects them to ‘be a man’ and ‘suck it up’ when they feel sad or scared. Another third said they believed they should ‘hide or suppress their feelings when they feel sad or scared.’ About half of boys polled said ‘they want to learn more about having the “right to feel any way you want.”‘ […]

Adam Neville’s mother brought him to Mount Sinai’s Adolescent Health Center in New York when he was 14 because he had difficulty communicating his emotions, with ‘unexplained outbursts of crying,’ he recalled.

Neville, now 16, said he didn’t feel ‘at all’ comfortable talking about his feelings with others, particularly his friends.

‘With my counselor it’s different because it’s literally what that relationship is for,’ Neville said. ‘That’s a little bit different, but in all of my personal life relationships, it’s very difficult to ask for help, and the idea that I have to be or should be independent weighs on me constantly.’

‘If you can’t turn to someone in your life and say how you are really feeling,’ the high schooler added, ‘then you’re only going to end up hurting yourself somehow down the road.'” 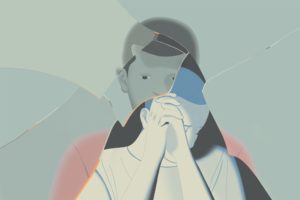