This has got to stop.  Around the world a million people die from suicide each year and the response internationally is to pour more funding and channel more people into psychiatric services.  Three large studies have now found that the more we spend on mental health services the higher our suicide rates.  In addition, a recent study has completely discredited claims that 90% of those who die from suicide are mentally ill at the time of their death.  We need to use this evidence to stop the expansion of psychiatry as a suicide prevention measure.

In 2004 a group of Australian researchers and the WHO conducted a study across 100 countries which tested the theory that the implementation of national mental health policies, programs and legislation would be associated with lower national suicide rates.  They found the opposite.

The authors were bemused.  Given their belief that mental illness causes suicide, they found the results counter-intuitive and rushed to dismiss them.  It would be naïve, they said to accept the findings without question.  They stated that there was a clear need for further studies in the area.

And so another study was done.

In 2010 researchers from the UK replicated the results and found suicide rates were increased in countries with mental health legislation, higher spending on mental health, greater numbers of psychiatric beds, psychiatrists and psychiatric nurses, and the availability of training in mental health for primary care professionals.[2]

As with the previous study, the authors cautioned against accepting their findings and advised that further studies were needed to replicate the results of their study.

Recently a third, much larger, study was conducted over 191 countries and a population of 6.4 billion people.  This study controlled extensively for economic factors and found that numbers of psychiatrists and mental health beds were significantly positively associated with population suicide rates and concluded that “Countries with better psychiatric services experience higher suicide rates.”[3]

The authors are again cautious about their results but note that their study corroborates the positive associations between mental health provision and population suicide rates and suggest that “The consistency of these findings indicates the need to examine potential underlying pathways.”

What makes these authors so ready to question their findings and suggest they be treated with caution?  It is, I think, the ubiquitous belief that suicide is caused by mental illness.  The 2004 study states

It would be anticipated that cohesive, national mental health strategies would be associated with comparatively low suicide rates, given that mental health problems significantly increase the risk of suicide.

Availability of healthcare services may reduce suicide rates by allowing identification and treatment of mental illness.

While data from high income countries indicate that severe psychiatric illnesses, especially depressive disorders, are the principal cause of suicide, research from LMICs (Low to Medium Income Countries) suggests that social, economic and cultural factors also have significant influence.

I have spent five years arguing that psychological autopsies have no reliability or validity and that the idea that almost every suicide can be explained as a product of mental illness is a marketing message not a scientific finding.  The issues associated with diagnosing a living person are well known – how many more issues must exist in performing a psychiatric assessment on someone who is dead?

One of the most established “truths” in suicidology is that almost all (90% or more) of those who kill themselves suffer from one or more mental disorders, and a causal link between the two is implied. However, there has been little reflection on the reliability and validity of this method.[4]

They challenge the reliability of the psychological autopsy process on numerous grounds.  They argue, for example, that some questions in a diagnostic interview are impossible for someone other than the subject of the question to answer, and ask “is it really possible to assign psychiatric diagnoses to someone who is dead by interviewing someone else?”

What living person would be happy to be diagnosed as depressed on the basis of their mother/brother/friend (a proxy) answering the following questions about them?

Is a spouse/parent/child able to reliably answer the following questions which may lead to a diagnosis of substance abuse disorder?

The researchers point out that “most questions asked to assign a diagnosis are impossible to answer reliably by proxies, and thus, one cannot validly make conclusions.”

While the authors of psychological autopsy studies claim the diagnostic tools they use are reliable and valid, they ignore the important fact that they have not been validated for use by proxies.  The authors point out that family members or friends may have opinions about a dead person’s mood and drinking behaviour, but that such subjective opinions do not necessarily represent the reality of the deceased.  They point out that “Proxies can speculate, but such speculations can hardly be used to assign psychiatric diagnoses to others.”

The study points to evidence from studies of suicide attempts showing that differences have been found between what the person who has made the attempt says about their mood, feelings and intentions and what his/her family or doctors say about them .

It questions the validity of psychological autopsies based on the fact that in assessing mood disorders some of the indicators are about suicidality.  Given the person has already killed themselves they receive an automatic positive on this criterion and as such the threshold for diagnosis is lowered.  Before the interview has commenced, then, suicide victims are more likely than controls to reach the diagnostic criteria and as such is an effective way of ensuring that the results show suicide victims are more mentally disordered than other groups of people.

As the diagnostic threshold for mental disorders is lowered with each new iteration of the DSM, more and more suicide victims will be retrospectively labelled mentally ill.  For these and other reasons, the authors state that “as a diagnostic tool psychological autopsies should now be abandoned.”

A range of social factors have been associated with suicide risk.  The following table shows the percentage reduction in suicide that a variety of studies have estimated could be achieved through elimination of these factors, and based on WHO estimates that 1,000,000 people worldwide die from suicide each year, the number of lives that could be saved. 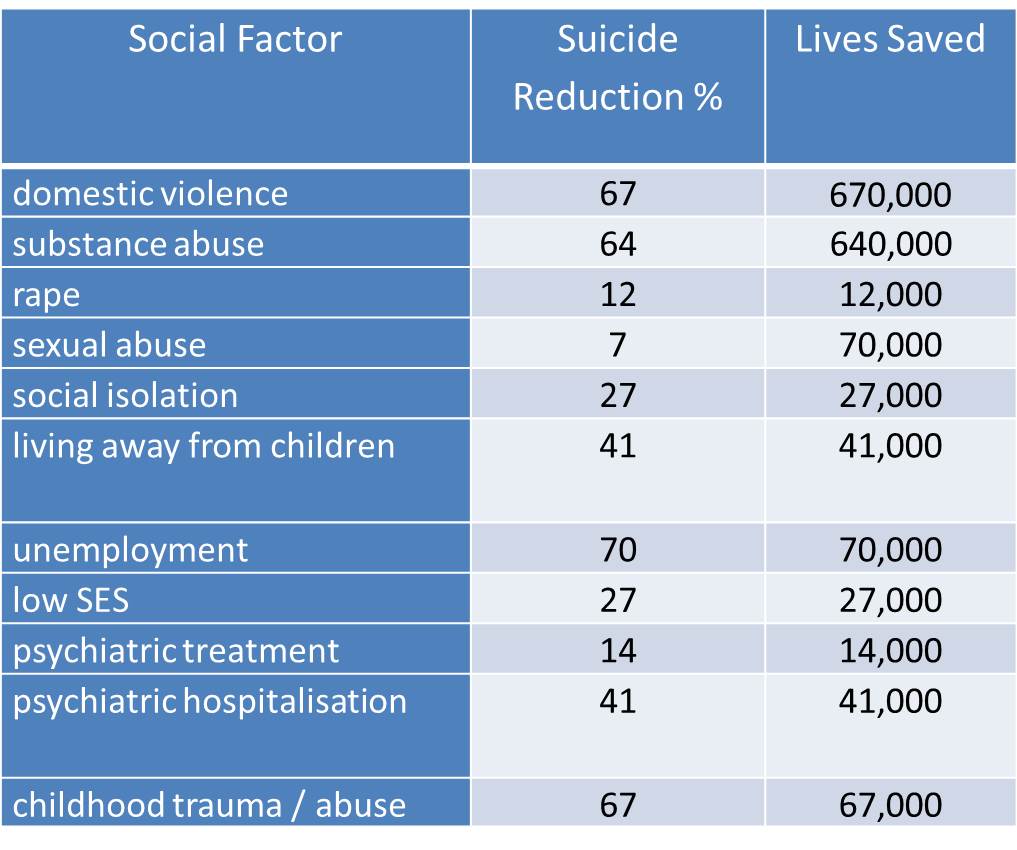 In 2008, the OECD reported that a recent analysis had shown that 28 European countries had spent more than €118 billion just on treatment for depression.  This figure comprised direct costs of €42 billion; €22 billion for outpatient care, €9 billion for pharmaceuticals and €10 billion for hospitalisation, with indirect costs due to work absenteeism and premature mortality estimated at €76 billion.[7]

We spent all this money, and the more we spent the more our suicide rates increased.  More people died – alone and in anguish – by their own hands.  More families were destroyed and left to live with unimaginable pain and grief.  Less money was available to address the real causes of emotional distress and suicide.

This has got to stop and I think it could if each one of us presented this data to our local government representative, spoke to our local media or called a meeting of voters in our community.  A million people will take their lives in 2014 unless we join forces and use the data these researchers have provided us to make this stop. In this new year, do you think you could do something?