From Elemental, by Medium: “With his retirement approaching, Joe Schiel was experiencing heightened levels of anxiety and stress. His doctor prescribed a generic version of Lexapro, an antidepressant in a group of drugs called selective serotonin reuptake inhibitors (SSRI), to ease a difficult transition. Nearly a month later, he jumped off a hotel’s fourth-floor balcony.

Stewart Dolin started taking paroxetine, a generic version of the SSRI Paxil, following the stress of increased responsibilities at his job. Just six days later, he leaped in front of a moving train.

The deaths of Dolin and Schiel, who were both in their fifties, stunned their families. Dolin had no history of mental illness. Schiel had an episode of sharply increased anxiety many years earlier. How could they have died by suicide so quickly following a commonly prescribed treatment for a relatively minor mental-health issue?

For both men, the brief period between starting the medication and their death was extremely suspicious. ‘It wasn’t the Joe I knew,’ says Janet Schiel, Joe’s widow. ‘Just all of a sudden, he was a different person.’ Almost immediately after Joe began taking the medication, Janet noticed that her husband became paranoid and restless. He expressed extreme distrust of people he had been close to for years, convinced they were plotting to destroy him somehow. He also became extremely socially withdrawn.

‘He would tell me, “I don’t know what to say to people, I can’t have a conversation.” In over 30 years together, I never heard that,’ she says.

Janet didn’t know this at the time (and it was never officially diagnosed by his doctor), but after Schiel’s death she was told that his symptoms were a classic presentation of acute akathisia, a . . . side effect of medication, most commonly antipsychotics and certain antidepressants, characterized by extreme inner restlessness. For some, the turmoil is so strong it quickly leads to death by suicide.” 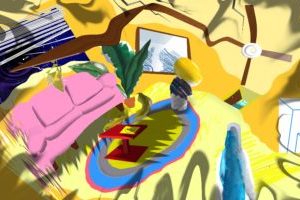