In commemoration of World Benzodiazepine Awareness Day coming on July 11th, I am providing an early first time debut at Mad in America of a new song and music video titled “Benzo Blue.” I am also sharing the written lyrics and a brief commentary on the evolution and significance of this song. Hopefully, MIA readers will be inspired to participate in a lively discussion of the particular role of this kind of political art in the comment section that follows the blog.

Last August I picked up my guitar again after leaving it idle for many decades. I actively played for a brief period in my early 20’s (I am now 69 years old) as part of my post 1960’s radical activities; this included writing a few “organizing” type songs and singing at political rallies.

In 1990, while attending graduate school to be a counselor, I became a major critic of Biological Psychiatry after discovering the writings of Peter Breggin. And then in September of 2015, following 23 years of working as a counselor and fighting the complete takeover of the community “mental health” system by their oppressive medical model, I resigned out of protest from a clinic in New Bedford, MA. Today some of my current artistic efforts are focused on writing and performing music that is exposing of all forms of political oppression. I have especially targeted Psychiatry and all the related harm caused by their disease/psychiatric drug-based medical model of so-called “treatment” that deeply permeates every pore of our society.

Starting in January of this year I started singing at open mics in the southern part of Massachusetts and for a few weeks in Florida. I also wrote and started performing two protest songs specifically targeting psychiatry and Big Pharma. On my guitar I have large printed decals with the words “Psychiatry Kills” and “Resist Now.” 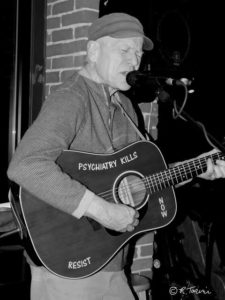 All this has created some interesting responses from various audience members. Interestingly enough, no one has expressed any hostile comments to these very provocative slogans. On the contrary, several people have approached me with personal stories about their harmful encounters with the psychiatric system. One man shared how he lost 12 years of his life to a series of 18 different psych drugs. One woman, after sharing her own successful struggle to liberate herself from psychiatric drugs and their related labels, insisted that I provide a copy of the words to one of my songs. A month later, when I encountered her at another open mic, she was so pleased to finally get a copy of the song’s lyrics, and she expressed strong support for my singing these type of songs publicly.

The song “Benzo Blue” was inspired by what I have learned from many personal conversations with benzo victims/survivors, combined with my reading of perhaps hundreds of firsthand accounts of those harmed by these drugs. In addition to this experience, I have seen many examples of benzo damage in my counseling work over the years, especially while working at the community mental health clinic. I have also known people who have died from benzo-related effects, and currently have close friends who are suffering from their history of being prescribed benzos.

While I have written several blogs at MIA on the worldwide benzodiazepine crisis, part of my focus has always been on the particular hidden role of benzos in the epidemic of poly-drug (opiate) overdoses that is sweeping the U.S. There is documented evidence of at least a 30% benzo involvement in these deaths. I believe, if all the data were available, this figure could be much closer to 50%. (See my previous blogs “Bridging the Benzo Divide: Iatrogenic Dependence and/or Addiction?” and “Who and What Killed Prince and Michael Jackson? Will the Role of Benzos Ever Be Revealed?”)

“Benzo Blue,” however, is NOT a song about addiction OR personal drug abuse, as should be very clear when hearing or reading the lyrics. This song highlights the struggles of the millions of worldwide victims/survivors of prescribed benzodiazepine drugs such as Xanax, Ativan, Klonopin, and Valium. These are people whose only mistake was, unfortunately, trusting psychiatrists, primary care doctors, the FDA, and Big Pharma, and then agreeing to take their dangerous and harmful drug prescriptions strictly “AS PRESCRIBED.”

The results of all this has become an international medical nightmare of epic proportions; one that continues to fly below the radar of the medical profession and the general public. The above mentioned institutions have seemingly no interest in ending the prolific prescribing of benzos (100 million prescriptions a year in the U.S.); for all their profit and “power and control” are far too intoxicating for the ongoing maintenance of the current profit-based economic and political system.

Ending this benzodiazepine crisis requires major systemic changes throughout our entire society, thus this situation demands major organizing efforts from among the broad masses of people. Music and other art forms can play an important role in helping to end this crisis. It is my hope that this song, and others like it, will be spread broadly across the internet, and also be sung widely in many public gatherings. If people believe that “Benzo Blue” speaks the truth, by accurately representing the deepest pain and sentiments of benzo victims/survivors, then, by all means, share this music video throughout ALL your connected forms of social media.

Depressed moods, and/or a so-called deeply “blue” state of mind, represents only part of the totality of the benzo experience. Benzo survivors report a host of other side effects (or main effects) such as increased anxiety, insomnia, dysphoria, and loss of balance, just to name a few. There are also far too many examples of people taking their own life to escape the horrible effects of these drugs. This is why the chorus of “Benzo Blue” includes the line “…It’s a blue so deep it is almost black / And she doesn’t know if she’ll ever make it back…” — implying that this is FAR worse than just being “blue” in the more commonly used sense of the word.

The main character in “Benzo Blue” is a woman. Many men are also victimized by benzos and this song represents their experience as well. However, the reality is that the overwhelming majority of benzo victims are women; women are twice as likely to be prescribed various so-called “anti-anxiety” drugs, including benzos. Higher prescribing rates also exists for other categories of psychiatric drugs as well. This represents just one more example of the overall greater oppression women face in our society.

This song does not have some type of “happy ending” or even attempt to characterize so-called “recovery” from these drugs. The “jury is out” on many of these questions, even though there are many survivor accounts of successful efforts to taper off of these drugs and get some semblance of their lives back to normal. However, there are also many stories of very uncomfortable lingering effects still present long after a tapering process ends.

It is clear in the final verse of “Benzo Blue” that the woman character is beginning to show some signs of resistance, and she also has begun to reach out for social support and connection to help solve her problems caused by these drugs. The full story of the worldwide benzodiazepine crisis has only just begun to be told, and there are many more chapters to be written in the future. We all need to do our best to tell the true story, and various art forms can be an important medium to help accomplish this goal.

As many song writers know, we often agonize over the writing of every single line of our lyrical content. I did give deep thought regarding one of the last lines of the song “… And there’ll be no mercy / When Psychiatry finally has its day.” While it is true that all of organized medicine (along with Big Pharma and the FDA) has been involved in initiating and perpetuating the benzo crisis, psychiatry (along with their development of the DSM bible of psychiatric disorders) did have a particularly important initiating and expanding role in this sad chapter in medical history. And psychiatry still remains at the top of the pyramid of power here.

As detailed in books such as Psychiatry Under the Influence (Whitaker and Cosgrove) and Toxic Psychiatry (Peter Breggin), it was the collusion of psychiatry and the pharmaceutical industry, using fraudulent science and PR campaigns, that pushed through FDA approval for Xanax and other benzos beginning in 1981. And it was one year prior (1980) that the American Psychiatric Association (APA) codified anxiety disorders in their DSM lll bible, and began their multi-billion dollar promotion and advertising of various benzos as the “solution” to life’s anxiety and sleep problems in modern society. The rest is history still being written.

I believe that psychiatry must ultimately have its day of judgement in our society. Certainly its top leadership must be held accountable for the overall harm caused by this worldwide benzodiazepine crisis. Without such a day of reckoning, there will be no “incentives” or “consequences” in our society for the necessary changes to take place to adequately protect the public from these types of medical abuses.

So I am saying to all the readers of this blog, “sing those songs of freedom” and promote art that challenges the status quo. Make good use of the open mics and other “busking” opportunities on street corners that exist in every city in this country. Sing “music that matters” and share your music and radical politics with other musicians, including a strong message that exposes all forms of psychiatric abuse.

To anyone who wants to discuss “Benzo Blue” and other similar songs in greater detail, including the lyrical content and the specific chords used, and/or how to promote this kind of music in your area, you may email me by using the Mad in America contact list.

“Dare to Struggle, Dare to Win.”