Two years ago, I read Robert Whitaker’s book Anatomy of an Epidemic. Little did I know then that I would get to work with him on the issues that unite us. Since Autumn of 2018, I have been working on the Swedish site which now joins the other global affiliated sites: Mad in America Hispanohablante, Mad in Asia Pacific, Mad in Brasil, Mad in Finland and Mad in the UK. It is with great pleasure that I announce that Mad in Sweden launches today, March 16th, 2019.

The number of people in Sweden experiencing mental ill-health has increased dramatically in the last couple of years. Society’s efforts to address mental health are often characterized by great legal uncertainty and dominated by a biomedical view of human distress. Many feel that this road will, ultimately, lead to more distress and not meet society’s needs.

In pace with the rapidly increasing reports of poor mental health, the number of people receiving a psychiatric diagnosis has also increased sharply. It seems clear that diagnostic inflation is having a profound impact on vulnerable children and young people. In outpatient care for children and young people aged 0-24 years, the number with a diagnosis has increased several hundred percent since the beginning of the 21st century.1 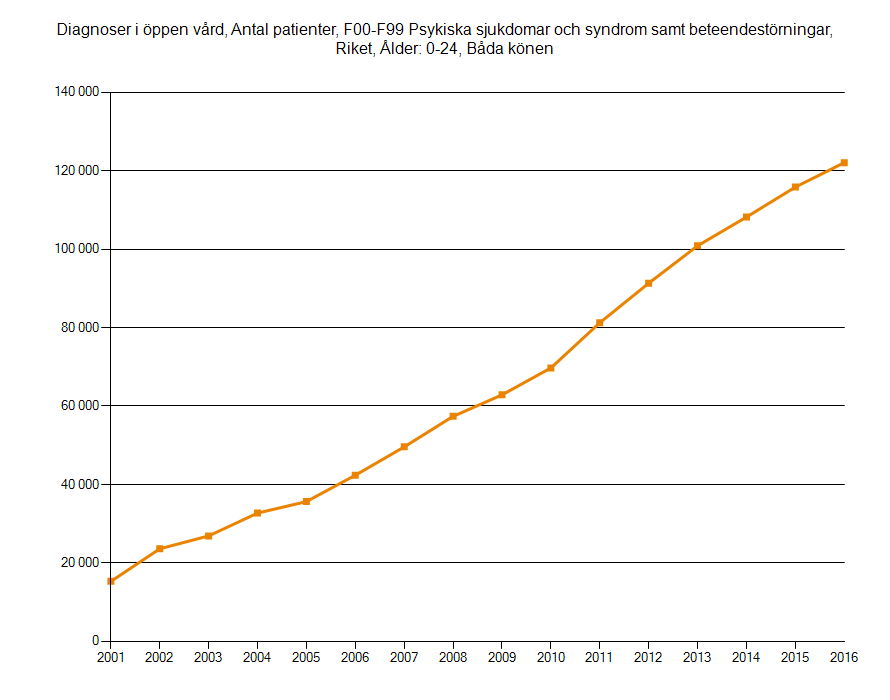 The diagnoses that have increased the most during recent years are depression and anxiety disorders. Even neuropsychiatric diagnoses such as ADHD and autism have increased significantly. The same applies to other diagnoses, as evidenced by increasing use of antidepressants and other psychotropic drugs.2

Although alternatives to both psychiatric diagnosing and the often inevitable psychiatric medication exist, these are rarely mentioned in the public narrative. Thus the vulnerability and social exclusion of the children and young people is reinforced along with the unsustainable influence of the biomedical view of human distress and suffering.

When looking at psychiatric prescribing, we see a similar story to that of diagnosis. For example, the prescribing of antidepressants and sedatives/anxiolytics to children aged 0-17 years has doubled in the last decade.3 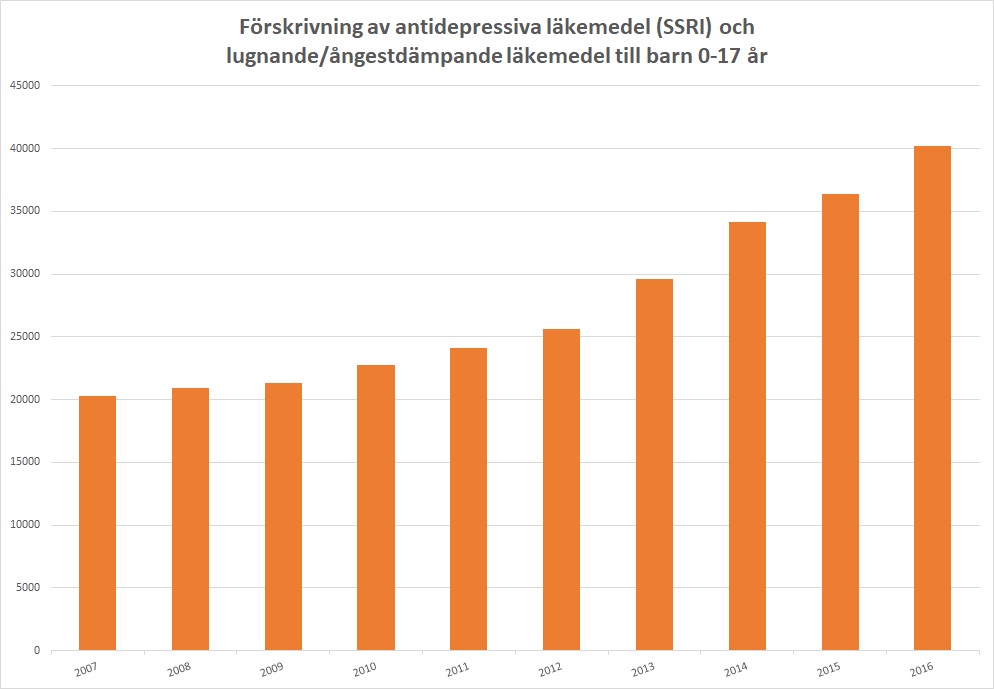 As regards the prescription of antidepressants to children and adolescents between 0 and 19 years, Sweden differs markedly from its Nordic neighbors Norway and Denmark. While prescriptions have increased gradually in Norway and decreased by almost half (!) in Denmark over the past seven years, prescription in Sweden has instead increased explosively during the same period of time.4 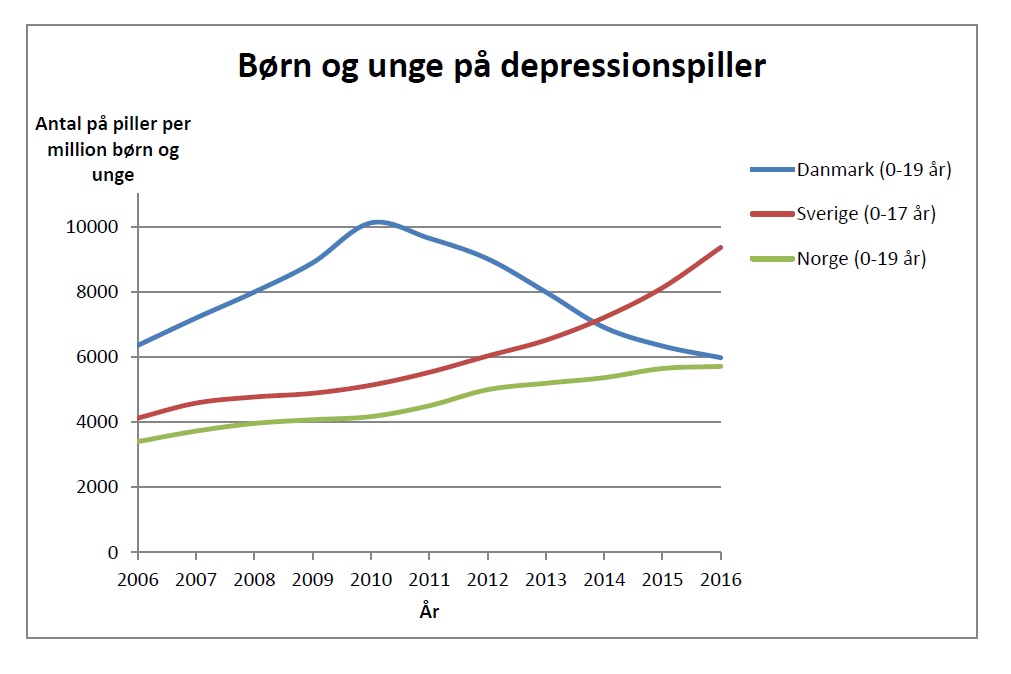 When it comes to ‘mental illness’ among young people, there are even large regional differences across Sweden.5 This also applies to the prescription of psychotropic drugs, including ADHD-drugs, where the number of patients between 0 and 24 years has increased in the last 10 years.6 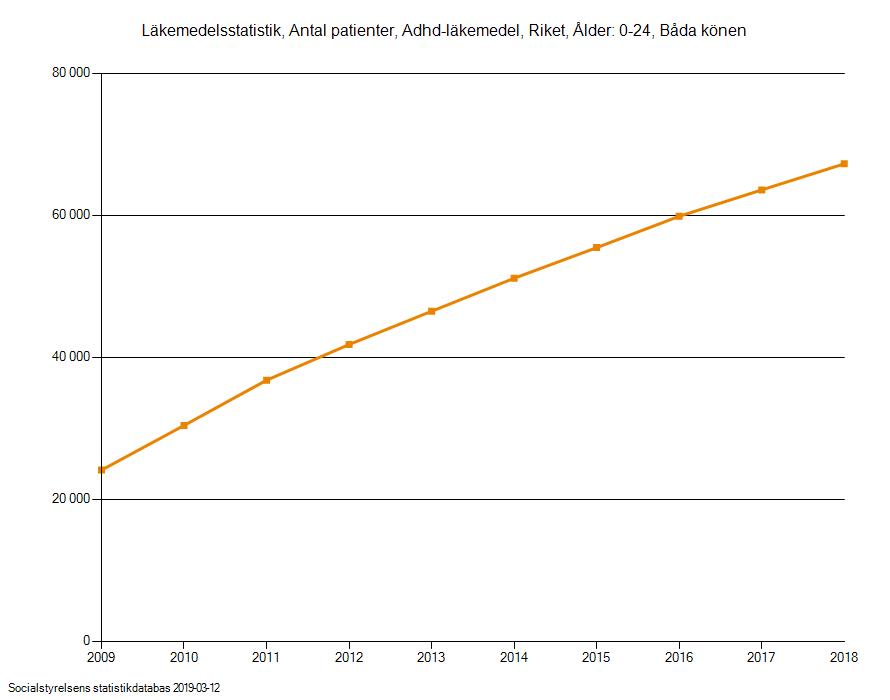 What the large variations in both psychiatric diagnosis and prescription of psychiatric drugs really result from is a matter for speculation. Regardless of any causal relationships, these phenomena still leave us in doubt as to the value to society of increased diagnosing and prescribing.

Lack of knowledge about psychotropic drugs and their side effects

In addition to the symptom-based and pharmacologically oriented guidelines, there are also large gaps in knowledge regarding psychiatric drugs and their side effects within public health care. Information for patients is often nonexistent and the prescribing is often done without any plan for follow-up, side-effect reporting or withdrawal. In the case of tapering, there are huge gaps in knowledge, which increases the risk of exposing patients to very difficult and sometimes life-threatening withdrawal symptoms.

Looking at the current state of knowledge and the practice that this generates, we can only note from the above that much remains to be done to enable us to find more patient-safe and sustainable approaches in our response to mental and emotional suffering in Sweden.

Together for a sustainable change

With Mad in Sweden we wish to contribute to this change by bringing forward alternative perspectives to the currently dominating biomedical paradigm of mental health, and to hopefully influence unsustainable mental health practice in Sweden.

Mad in Sweden will be administrated in collaboration with FAP – Föreningen Alternativ till Psykofarmaka (The Association Alternatives to Psychotropics), a national politically and religiously independent non-profit association, whose mission is to contribute to improved public health in Sweden. It is an honor for me, both as chairman of FAP and as responsible publisher/editor-in-chief of Mad in Sweden, to be part of a global network of people who, together, want to reform society’s efforts in the mental health arena.

The need for alternative perspectives to today’s biomedical and pharmacologically oriented paradigm of mental health has never been greater. As the United Nations Special Rapporteur on the right to health, Dainius Puras, points out in his 2017 report: “The world needs a revolution in mental health care.”8 9 Mad in Sweden wishes to contribute to the debate and be part of that revolution.