A new study tested transcranial magnetic stimulation (TMS) for treating people with a bipolar disorder diagnosis. The researchers found that actual TMS was no better than a sham (fake) treatment.

The study was led by Lakshmi N. Yatham at the University of British Columbia Hospital in Canada and published in JAMA Network Open.

The specific type of intervention used is intermittent theta-burst stimulation (iTBS), a type of TMS. The researchers targeted the left dorsolateral prefrontal cortex (LDPC) in the brain. The goal was to relieve depression symptoms in people diagnosed with bipolar disorder.

iTBS was used, and the LDPC was targeted because these are currently popular TMS methods in depression treatment. Yatham writes:

“There was no evidence of antidepressant superiority for active iTBS over sham iTBS, and safety is uncertain because 1 hypomanic switch occurred with active iTBS and a second occurred during the open-label phase.”

That is, people randomly assigned to the fake treatment did just as well as people who received actual iTBS. Additionally, two people undergoing actual iTBS became hypomanic—compared with none who were receiving the sham treatment. 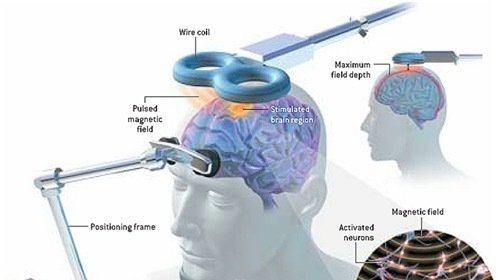 The study was double-blinded, meaning that neither the participants nor the researchers knew who was receiving iTBS and who was receiving the sham treatment. The randomized, controlled trial lasted for four weeks, with an additional four-week “open-label” phase during which there was no sham control group.

The 37 participants were required to have a diagnosis of bipolar disorder I or II, be currently experiencing a major depressive episode, and be currently taking a mood stabilizer and/or an antipsychotic drug. They were also required to have had no “clinical response” to the drug—that is, for the participants in this study, mood stabilizers and antipsychotics did not work to improve their symptoms.

People who had previously had no response to TMS were excluded, as were people who were suicidal, experiencing psychosis or substance abuse, or undergoing psychotherapy.

Nonetheless, this isn’t the first study to demonstrate the ineffectiveness of TMS. A 2016 sham-controlled study of a different type of TMS (sequential bilateral repetitive transcranial magnetic stimulation) similarly found that the active treatment was ineffective in those with a bipolar disorder diagnosis.

Even in the treatment of people with a depression diagnosis rather than bipolar disorder, the evidence for the effectiveness of TMS is unclear. Three large, multisite trials found that TMS was ineffective.

A review by the Clinical TMS Society frames these findings positively, but the results are clear: