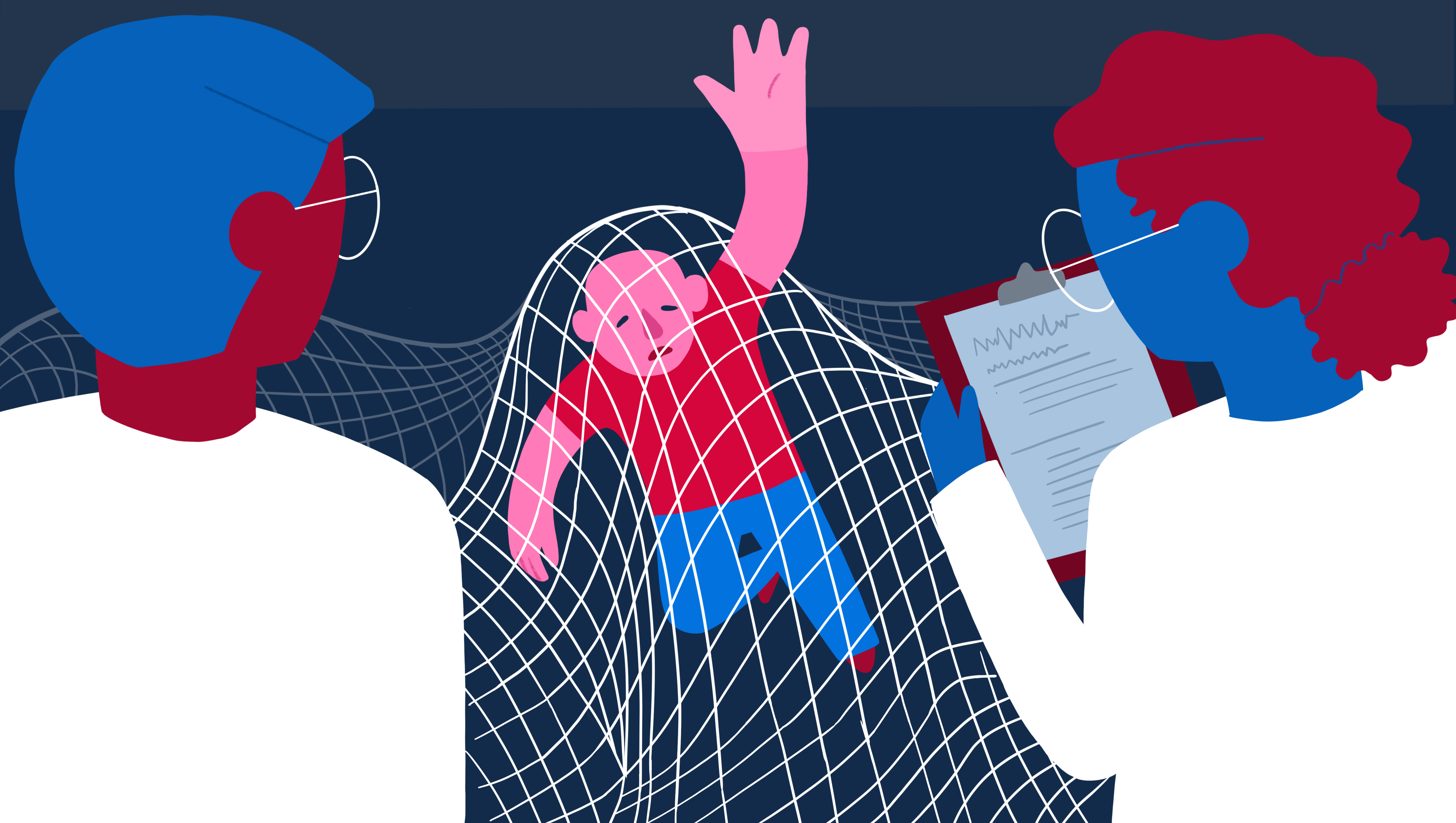 In a recent article published in the journal Current Medical Research and Opinion, researchers funded by AbbVie (a pharmaceutical company that sells several medications for depression and bipolar disorder) stated that they had developed a six-question “Rapid Screening Tool” for diagnosing bipolar I.

This screening tool is now being promoted in outlets such as Psychiatric Times, which features a slideshow titled “How to Screen for Bipolar Disorder in 2 Minutes.” The subtitle: “A new test screens for bipolar disorder with respectable accuracy.”

Yet, as even a quick look at the research paper reveals, this questionnaire wasn’t even tested as a screening tool, and it relies on questions that mistake adverse reactions to antidepressants and other psychiatric drugs as symptoms of bipolar disorder.

But this publication also suggests a larger subject: Is there any evidence for “screening” for psychiatric disorders? And what are the potential harms?

According to the declaration of funding published with the article in Current Medical Research and Opinion, the pharmaceutical company Allergan funded the development and testing of the screening tool. Allergan is now owned by pharma giant AbbVie.

Among Allergan’s top products are the antidepressant drugs citalopram (Celexa) and escitalopram (Lexapro); AbbVie is the producer of Depakote (divalproex sodium), an anti-epileptic whose first indication is the “treatment of manic episodes associated with bipolar disorder.” They also market the antipsychotic drug cariprazine (Vrylar) for bipolar disorder.

Three of the listed authors—Patel, Harrington, and Gillard—are listed as employees of AbbVie.

Two other authors—Brown and Nelson—are employees of RTI Health Solutions, a company that the pharmaceutical industry uses to analyze data and then write and publish their research so that it appears not to come from the industry itself.

All of the listed authors report extensive conflicts of interest with the pharmaceutical industry, except for the employees of RTI. Masand, McElroy, Sullivan, and Jain report receiving speaker’s bureau or consulting payments from Allergan or Abbvie specifically.

The authors also acknowledge the work of AbbVie’s contracted ghostwriting firm as follows: “Writing and editorial assistance was provided to the authors by Carol Brown, MS, of Prescott Medical Communications Group (Chicago, IL), a contractor of AbbVie.” Brown is not a listed author on the paper.

Even the peer reviewer hired by the journal to ensure an unbiased review of the manuscript lists 22 different conflicts of interest with the pharmaceutical industry, although none were with Allergan or AbbVie specifically.

The researchers call their tool for detecting bipolar disorder the RMS—Rapid Mood Screener. So how did they develop and test this measure?

The researchers did not test whether the tool could be used to spot “bipolar I” or “depression” in people who presented without symptoms or whether it could differentiate between healthy or “normal” controls and people with a diagnosis. Instead, they tested whether the RMS could differentiate between people who were already diagnosed and being treated for either depression or bipolar I.

Thus, the tool does not actually meet the definition of a “screening” instrument.

“Screening,” in the medical field, is the act of using a test to detect people who are not showing symptoms (or showing very few symptoms), but who may have the early stages of an illness that will get progressively worse.

Even more concerning is that at least four of the six questions on the RMS essentially measure the adverse effects of psychiatric drugs. One of the questions specifically asks whether the patient has experienced mania induced by antidepressant use.

Answering four of the six questions “yes” results in a positive “screen” for bipolar I disorder. In total, the RMS consists of two questions about depression and four questions about the adverse effects of antidepressant drugs.

That is, a clinician using the RMS will almost always conclude that people who experience the mania-inducing effects of antidepressant drugs should be diagnosed with bipolar I disorder.

The six questions on the RMS are:

Notably, if a patient answers “yes” to question 3—indicating that they experienced the mania-inducing effects of antidepressant drugs—they will likely also meet criteria for questions 4, 5, and 6, which are the symptoms of (hypo)mania.

Thus, after experiencing just one week of adverse effects from an antidepressant, the patient will screen positive for a diagnosis of bipolar I.

It is likely that in the general population, this measure could lead to further increases in the bipolar disorder diagnosis, since the criteria for these six questions would be remarkably easy to meet.

What’s the Harm of Screening?

Screening is a debated procedure even for many physical illnesses. For instance, screening for cancer can help detect the illness before a person experiences symptoms, but it also leads to overdiagnosis and overtreatment. Low-risk abnormalities (which might never turn dangerous) may end up being treated with procedures like chemotherapy, which are themselves harmful to the body. In some cases, it is unclear whether the benefit exceeds the risk.

The risk/benefit ratio is even more unclear in psychiatric diagnoses. In fact, there has not been a single study that provides direct evidence of a benefit for screening for psychiatric disorders.

In 2016, I was part of a research team that investigated the evidence for screening for psychiatric disorders. Guidelines from the US had very different opinions from guidelines from Canada and the UK on when screening would be helpful—and even whether there was any evidence for it.

Why the discrepancy? The US guidelines pointed to indirect evidence—particularly studies that showed that screening could be implemented but didn’t appropriately compare outcomes, or studies that provided extra care to the screened group but not the non-screened group (that is, these studies didn’t compare “apples to apples”).

In contrast, the Canadian and UK guidelines looked for direct evidence. They found that there was not one study focused on any of these issues that directly compared screening to non-screening and found better outcomes.

We were able to find six studies that compared screening to non-screening in an appropriate fashion. Five of those studies found no statistically significant benefit to screening. The final study reported ambiguous results that also didn’t strongly support benefit.

Screening for depression, specifically, has long been lambasted in the research literature as useless at best, and dangerous at worst:

What Happens in the Real World?

But sometimes the data from clinical trials and meta-analyses don’t tell the full story. Doctors may dismiss this data, preferring to rely on “clinical judgment” to do their job. So what happens in the real world?

A new article by trauma survivor Anna Austin, published in JAMA Internal Medicine, may help tell that story. She explains how she has answered “yes” on the trauma screening she’s given every time she seeks medical care—and how she has never received any follow-up or even acknowledgment of that disclosure.

She describes the feelings of shame that accompany trauma, and how this can be exacerbated when disclosure is ignored, especially repeatedly, and especially by someone in a helping profession. She describes how she was left questioning whether she should ever disclose something like this and whether her medical professionals even cared.

“Questions about traumatic experiences are deeply personal,” she writes. “And while perhaps well intentioned, asking patients to disclose potentially painful and distressing experiences with no follow-up can cause more harm. A key tenet of public health and medical ethics is that screening without readily available and accessible evidence-based interventions, let alone a compassionate conversation, is unethical.”

As demonstrated by Anna Austin’s experience, there is a real-world, human cost to people exposed to screening. Screening for trauma can leave a person feeling worse than if they had never disclosed it.

But another harm of screening is overtreatment, and the Rapid Mood Screener (RMS) for bipolar disorder is the quintessential example of such harm. People who are taking antidepressants for mild depression or anxiety may experience adverse effects of these drugs, such as (hypo)mania. Research has demonstrated that a person taking antidepressants is three times as likely to experience mania after taking the drug.

And the RMS “screening” tool makes it very easy for someone experiencing that side effect to now be given the much more serious diagnosis of bipolar disorder.

So what happens then? The person’s life may be upended. They will likely be told they have a lifelong chronic illness. They may be prescribed lithium or—just as likely—an antipsychotic such as those marketed by AbbVie/Allergan. These drugs have many adverse effects, which could negatively impact their physical and mental health.

Common side effects of lithium include headache, nausea, tremors, dizziness, and drowsiness—and the person must be monitored for lithium toxicity, which is deadly if not treated immediately. Common side effects of antipsychotics include drowsiness, dizziness, nausea, seizures, and tardive dyskinesia, as well as adverse effects on heart health and metabolism problems that can lead to extreme weight gain and diabetes. Antipsychotics have also been found to shrink brain volumes.

Such is the potential for harm. And, in terms of the use of the RMS, this turn in a person’s life could all be due to a side effect of a drug they were on for a milder condition—a side effect that could have been resolved just by tapering off the antidepressant. But instead, with the use of this bipolar “screening tool,” they end up with a more serious diagnosis, on more drugs, and experiencing all the harms of those drugs too.