When a medical specialty develops its clinical care guidelines, the “experts” in that specialty will review the research literature, and often that evidence base may present a very confusing picture. The results from the studies may be inconsistent, or contradictory. The experts are also faced with the challenge of weighing the benefits of a treatment against its risks.  However, there are also instances when the “evidence base” tells a consistent story, across decades and in studies of various types, and when that happens, the experts developing clinical care guidelines can rejoice: science has provided them with a clear picture of what is helpful and what is not.

This provides the clinical context for assessing the importance of Martin Harrow’s latest paper: It adds a new data point to a long list of research findings that all lead to the same conclusion: antipsychotics, over the long term, do not reduce psychotic symptoms, and, in fact, increase the likelihood that such symptoms will persist.

Harrow has now published a number of papers detailing the outcomes of the schizophrenia patients he has followed for more than 20 years. In previous articles, he has reported that those who stopped taking antipsychotic medications did better over the long-term than the medicated patients in every domain: recovery rates, anxiety symptoms, psychotic symptoms, cognitive function, and employment. In his newest paper, Harrow focuses more closely on medication use and psychotic symptoms, and by doing so, he is narrowing psychiatry’s focus to one critical issue: do these drugs provide any long-term benefit?

Antipsychotics, of course, cause many adverse effects, and thus, in any risk-benefit assessment, these drugs need to be effective in reducing psychotic symptoms in order for there to be something on the benefit side of the ledger. If the drugs don’t do that, then there are only risks – i.e. negatives – to be tallied up. And this is why I think we can now say that, with this latest publication of Harrow’s, that the fat lady has sung. The case is closed: psychiatry needs to rethink its use of antipsychotics.

The Evidence Cited for Long-term Use of Antipsychotics

Psychiatry, of course, does have evidence that it can cite supporting long-term use of antipsychotics. Its evidence consists of findings from relapse studies, but, as can be easily shown, those studies do not, in fact, tell of whether the drugs reduce psychotic symptoms over the long-term.

But there are evident flaws in that relapse literature. First, most of the relapse studies involved abrupt withdrawal of the medication, which is known to increase the risk  that psychotic symptoms will return. Second, the studies only tell of the return of psychotic symptoms in patients who have been on an antipsychotic; they don’t tell of the risk of relapse in patients who haven’t been exposed to the drugs. Third, they don’t tell of the risk of relapse over longer periods (two years, five years, and so forth.)

Indeed, what the relapse studies prove is this: if a person is stable on an antipsychotic, then it is a very bad idea to withdraw that drug abruptly. They don’t tell of how such treatment affects people over the longer course of their lives.

The Rest of the Evidence

Although it is well-recognized that the relapse studies don’t provide evidence that antipsychotics are effective over the long-term, most in the field assume that that is still true. However, there is a body of evidence, stretching back 50 years, that bears on this question, and when all of it is put together, it tells a consistent story. In brief:

a) In the 1960s, the NIMH conducted a nine-hospital study that compared placebo to drug treatment, and at the end of one year, those initially treated with an antipsychotic had a higher rehospitalization rate. Thus, at this very first moment of the research literature for antipsychotics, there is the hint of a paradox: treatment that is effective over the short term may increase the risk of relapse over the long term.

c) In three studies funded by the NIMH in the 1970s, which followed patients for one to three years, relapse rates were higher each time for the medicated patients. These findings led the NIMH’s William Carpenter to ask whether antipsychotics induced a biological change that made schizophrenic patients “more vulnerable to future relapse than would be the case in the natural course of the illness.”

d) At that point, two researchers from McGill University, Guy Chouinard and Barry Jones, offered a biological explanation for why the drugs would have this paradoxical long-term effect. Antipsychotics blocked dopamine receptors in the brain, and in compensatory response, the brain increased the density of such receptors. The person’s brain was now supersensitive to dopamine, and this, they wrote, could lead to “psychotic symptoms.”

e) In two cross-cultural studies conducted by the World Health Organization, which compared outcomes in India, Nigeria and Colombia with outcomes in the United States and five other developed countries, the patients in India and Nigeria fared the best. In those two countries,  few patients were maintained long-term on antipsychotics, and patients there were much less likely to be psychotic at the end of two and five years.

e) In the 1990s, researchers conducting MRI studies of schizophrenia patients reported that neuroleptic use, at the end of 18 months, was associated with hypertrophy of the thalamus and basal ganglion structures in the brain, and that this enlargement—as University of Pennsylvania investigators reported in 1998 —was in turn “associated with greater severity of both negative and positive symptoms.” Thus, the MRI studies told of antipsychotic-induced changes in the brain that made patients more psychotic over time.

f) In animal studies,  researchers at the University of Toronto have reported that the reason antipsychotics “fail” over time, as a treatment for psychotic symptoms, is that they cause an increase in dopamine receptors.

f) A recent randomized study by Lex Wunderink, of the Netherlands, when carefully parsed, tells a similar story. In his study, patients who had stabilized on an antipsychotic were then either maintained on the drug  or withdrawn from it (or tapered to a very low dose.) After two years, the relapse rate was higher in the withdrawn/low dose group (43% versus 21%.) However, at the end of seven years, the relapse rate for the withdrawn/low dose group was slightly lower (62% versus 69%), and the key point is this: during those five years (year two to seven in the study), the group that received drug treatment as usual relapsed more frequently than the withdrawn/low-dose group. This is a result consistent with the notion that antipsychotics increase the risk of relapse over the long-term.

g) Finally, we have Harrow’s 20 years’ data. There are two graphics from his newly published paper that neatly summarize his findings. 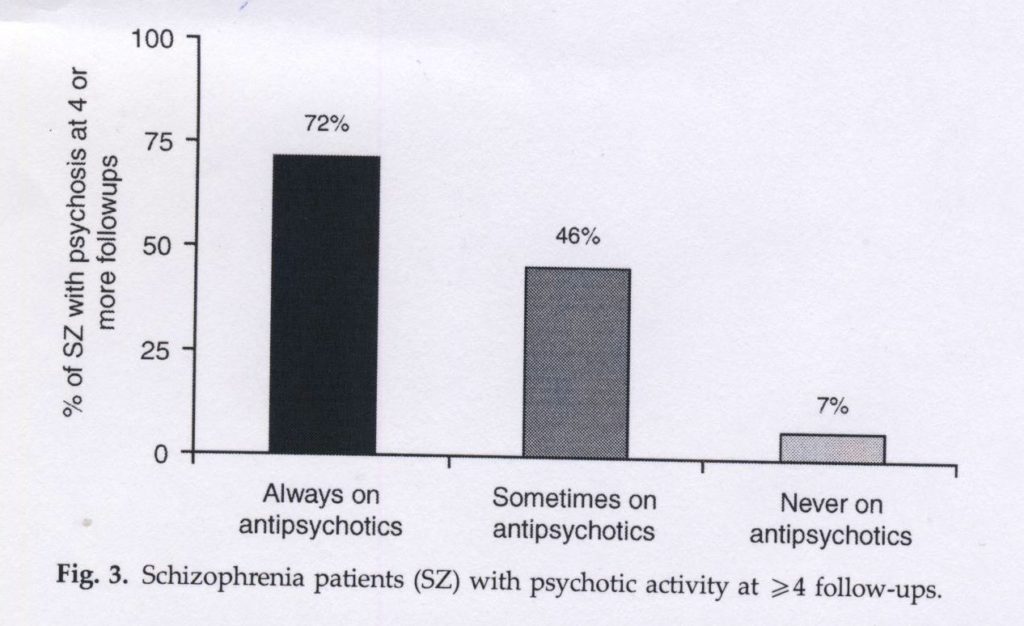 As can be seen in the graphic, 72% of the medication-compliant patients were persistently psychotic, whereas only 7% of those in the always-off meds group were.

This graphic shows that at year two, psychotic symptoms were present in the “off-med” group almost as often as in the medicated group. But symptoms then abated in the off-med group, whereas they persisted in the on-med group. This graphic provides compelling evidence that the drugs, at the very least, retard a natural recovery process.

Why the Fat Lady Has Sung

We can see that this body of evidence stretches over 50 years and that it tells a consistent story. The worry that antipsychotics might increase the risk of relapse showed up in the NIMH’s very first one-year study. It showed up in Bockoven’s retrospective study. Next, it showed up in three long-term studies funded by the NIMH in the 1970s. Researchers then offered a biological explanation for why these outcomes were occurring.  The WHO’s cross-cultural studies found better outcomes in poor countries where few patients were maintained long-term on antipsychotics. MRI studies identified a drug-induced change in brain morphology that was associated with a worsening of psychotic symptoms. Researchers who developed an animal model of psychosis concluded that drug-induced dopamine supersensitivity leads to treatment failure over time. Wunderink’s randomized study revealed a higher relapse rates between years two and seven for the medicated patients. Finally, Harrow’s long-term study, which is the best such study that has ever been conducted, found that the medicated patients were much more likely to be experiencing psychotic symptoms over the long term.

Harrow’s data does not stand alone. Instead, studies of multiple types are all leading to the same conclusion. Antipsychotics do not reduce psychotic symptoms over the long term and, in fact, increase the likelihood that such symptoms will persist. And imagine if the opposite were true and all these studies showed that medicated patients had fewer psychotic symptoms over the long term. Would anyone then question the long-term efficacy of antipsychotics? Psychiatry would then proclaim that the evidence was overwhelming that the drugs had such positive effect.

In her post on this site, Sandy Steingard presents a very compelling argument for a different use of these drugs: try to avoid initial use if possible, and then, if an antipsychotic is used, see if the person can be subsequently tapered from the medication. And if a person can’t be successfully tapered, prescribe as low a dose as possible. That is a protocol that provides for selective use of the drugs, and there is clearly an “evidence base” supporting a protocol of that type.  Indeed, such use could be described as a “best-use” model.

But the obvious question for psychiatry is now this: Can the field as a whole hear the fat lady sing? Or will it turn a deaf ear to her, and continue with care — the regular long-term use of antipsychotics for all — that clearly does harm?