Doctors do not experience extreme states of any kind. Neither do any of the other caregiver professions, from nurses and social workers to policemen and firefighters, right?

Dr. Eva Schernhammer’s 2005 meta-analysis of the existing data showed that women physicians are successfully suiciding at a rate that is 120% higher than age-matched professional peers. When I took that statistic to the head of the Physician’s Health Services (PHS) and asked him what he thought of that number, his reply was frightening:

Yes, the head of PHS, “a nonprofit corporation that was founded by the Massachusetts Medical Society to address issues of physician health,” let me know right away that I was about to enter the realms of Alice in Wonderland as I negotiated my own path to recovery. Because I am a female physician who survived my own suicide attempt.

That makes me a rare breed in at least three areas:

#1. Physicians tend to be very good at successfully offing ourselves; yet I failed (thank god!).

#2. I am an African-American woman; my culture – like caregivers – does not yet acknowledge the rates of distress in my community (can we pause to remember Sandra Bland, may she rest in peace).

#3. Rather than return to the career that gifted me with a toxic load of poor self-care behaviors, I left conventional medicine to take a more “feral” approach to the healing arts.

My dark night of the soul occurred over ten years ago. I am just now getting comfortable writing about it for a public audience, although it is the arts (writing, dancing, singing, visual arts) that I credit with giving me a scaffold for recovery.

It certainly was NOT the corporation charged with offering me recovery support.

I was assigned an MD to meet with me in my region of Western Mass. PHS operates out of the Boston area, and everything west of the Boston suburbs is the hinterlands. I asked him about his experience working with MDs who had survived suicide. His response was less frightening than that of the head of the PHS. “Have I ever worked with any MDs who attempted suicide? Hmmmmm… well, I have worked with a few that the Board of Registration in Medicine (Mass BORM) may have driven to suicide…”

Now I had not one, but two examples of strange behaviors within my Good Old Boy medical culture. Opeyemi’s Adventures in Wonderland became The Mad Hatter’s Tea Party when it came to the Mass BORM assessing my post-suicide-attempt competency to return to the practice of medicine. My medical license was suspended during the review process. My assigned lawyer was a very enthusiastic John F. Kennedy-style Irish Catholic. He explained to me what I could expect; that I would need to be assessed by a psychiatrist, and then should be able to resume my medical practice. He said this process usually took about three months.

Sixteen months later, I withdrew my case from the entire process. I was totally disillusioned with my chosen career, my professional peers, and my state medical board. And I imagine that my treatment in the hands of the Mass BORM might just have broken my progressive-minded lawyer’s heart just a little bit.

I had experienced “sanctuary trauma” of the most amazing kind over that ordeal of a year and a half. A psychiatrist dissected me like a frog in a physiology class, heart still beating the entire gruesome time. I eventually had to meet with him three times. Not only had he referred me to a psychologist in the middle of his evaluation (“Hmmmm,” said the psychologist after giving me Rorschach testing, “you see the world like an artist,” and after another test, “You have a way of looking at the world that makes people afraid of you”), he felt compelled to interview five people who knew me, not the usual three. He also suggested that the Board of Registration in Medicine might want to file charges against me.

Which they did. Charges of “undermining the public confidence in the profession of medicine.”

Do I believe that racism and sexism influenced charges being filed against me? I certainly do. In the 27-page report the psychiatrist finally released, he cited many of my lifestyle issues (I am polyamorous and had lived in community with ten other people in an “intentional family”), and he cited my religious beliefs (non-Christian), while declaring me “competent.” It seemed that he was saying, “Hey guys… I tried and tried, and I cannot declare her incompetent, but look at how weird she is!” My final diagnosis: personality disorder, UNSPECIFIED.

I had managed to fly under the radar as a very progressive family MD for twenty years. And when I stumbled and bled, the sharks were there ready to devour the carcass.

My professional guild attempted to starve me out. My medical knowledge was considered their intellectual property, so I creatively used what was left to me – my body. I cleaned houses, I worked as an art model, I got a job teaching at the New England School of Acupuncture (NESA). Someone from the Mass BORM actually contacted the academic dean at NESA to assure themselves that I wasn’t “practicing medicine” (or maybe simply to get me fired, which didn’t happen). The dean was shocked to have a BORM representative call her sniffing around for evidence to use against me in a complaint.

I was the first doctor in my family; I imagine that my family remain ashamed of my failure, even today over ten years later. That is not based on speculation, but on painful examples. When my 88-year-old aunt traveled east from Los Angeles for a family reunion last year, I realized that her lifelong friend/travel companion had no idea of the circumstances of my leaving the medical profession.

Things we don’t talk about.

PHS opened my eyes to a racket I was not aware existed. At their open to the public conference, “Caretaking the Caregivers,” I realized that there is big money in private loony bins and drug rehab institutions specifically for doctors. Salespeople waited at their eye-catching booths at the break in the conference, just like Big Pharma does. That is why you don’t SEE the doctors and the nurses who are having the meltdowns; we are rehabilitated “elsewhere.”

I sought recovery support at a PHS-sponsored behavioral medicine group that met in Boston (sorry, no resources to offer one closer to my home, 86 miles away in the hinterlands), but only went twice. Witnessing the behaviors of my fellow MDs at that group was simply too painful to continue. You see, about 75% of MD problem issues stem from alcohol and drug abuse; only 25% are categorized as behavioral. The most common behavioral issue was not med students non-compliant with psychiatric meds, or doctors with psychiatric labels. It was The Disruptive Physician. That is a code phrase for arrogant white men (and unfortunately a few women) who came through medicine at a time when issues we now consider wrong were tolerated. Everything from that neurosurgeon who throws instruments across the room in a fit of pique during an operation, to the doctor who insists that grabbing the ass of the nurse in front of him is “just clean fun.” Managed care woke up to doctors with abhorrent behaviors only when it began to affect The Bottom Line.

As part of my punishment, I had to complete a remedial course in ethics. In a class of thirteen, there was one other woman, and ten men of color (I counted the one Jewish man in the program as “newly white”). One white man, out of thirteen people being “disciplined and needing remedial ethics.”

Yes, that was another thing that made me go “hmmmmmm.”

I took that three-day Rutgers University remedial course while teaching ethics at the New England School of Acupuncture. I took that course while sleeping each night in my car because I couldn’t afford a hotel. My “final” in that course, demonstrating my understanding of medical ethics, was accepted. I wrote that perhaps my REAL ethical issue was that I dared to be human, to have my own emotional breakdown, and to attempt to take my own life; that was my “failure to uphold the public confidence in the practice of medicine.”

I await a day when the caregivers actually have opportunities for healthy lives as we care-take others. In the meantime, I do not miss the doctor lifestyle that I left.

And I wonder, who is REALLY Mad, in America? 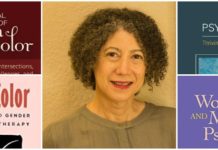 Addressing the Roots of Racial Trauma: An Interview with Psychologist Lillian Comas-Díaz 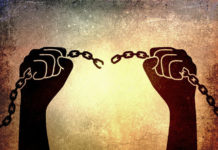