We know that all drugs have side effects. That’s just part of the deal right? But is it really possible that an antidepressant can cause a sane person to act like a cold-blooded criminal?

I imagined my audience would be wondering as much as I arrived to an unseasonably chilly day at King’s College in London. I was there to share what I have learned about the medications that I so dutifully and faithfully prescribed during the early part of my career, and also about the deep potential for healing depression in simple, safe ways, according to the latest science.

The day before my flight, I had received an email from a man who I would choose to invite on stage with me that day. His name is David Carmichael and he wrote:

“I took the life of my 11-year-old son Ian on July 31, 2004 in a Paxil-induced state of psychosis and was charged with first degree murder. I was judged to be “not criminally responsible on account of a mental disorder” in September 2005 and received an absolute discharge from the forensic psychiatric system (in Ontario, Canada) in December 2009. I’ve been off all prescription drugs since September 2010. Prior to our family tragedy, I was a physical active sports consultant with no history of violence or mental illness.”

He told an audience of clinicians and patients, that day, about how it is that a normal citizen, prescribed a seemingly safe medication for work-related stress, goes on to commit a heinous act of violence against his beloved child. This academic classroom was heaving with grief when he finished his description of events.

This must be rare, right? Totally anomalous?

It has become my contention that the Russian Roulette that is played with each new prescription of psychotropic medication violates the physician’s most primal tenet – first do no harm – and does so in the absence of anything approximating informed consent.

Violence as a Side Effect?

Thankfully, we are often given multiple chances to wake up to a greater truth. It’s becoming easier than ever. With grassroots platforms like madinamerica.com, the information is out there, when you are ready to look beyond main stream media to what the real victims are claiming.

The truth about antidepressants and violence is also in the most recently published literature, including a critical review, hot off the press, by Carvalho et al where the authors dive into the research on the supposed safety of SSRIs and SNRIs. In this document, they present an evidence-based horror menagerie of ways in which a simple antidepressant can derail your life if it doesn’t take it. Leaving patients with new medical diagnoses, antidepressants prescribed often for difficult transitions in life like divorces and deaths, carry documented risks that your doctor cannot possibly tell you about because if they knew of them, they would put down their prescription pad immediately.

Let’s take a tour. Neatly summarized here, the adverse effects of antidepressants can sound like that droning voice in TV ads that we are inured to because we have been told these “side effects are rare, and outweighed by the benefits.”

But the benefits are shockingly limited so, let’s take a closer look at those side effects… 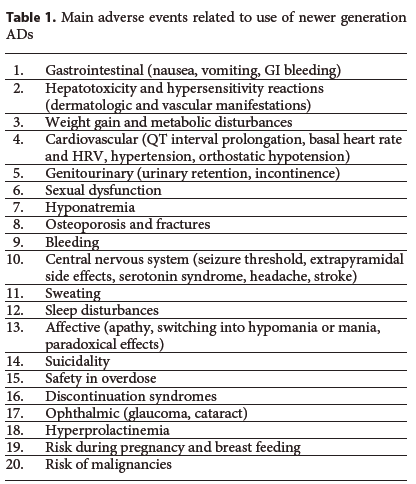 The Risks That Made Me Quit Prescribing

Having always represented antidepressants as safe and effective to my patients, I put down my prescription pad after learning 3 facts about psychiatric medications:

These insights were apparently just the tip of the iceberg. Several years into the horror stories of patient experiences and new relationships with grassroots activists, I am left wondering. What on earth are these meds? How could biochemistry have ever manifested molecules capable of derailing, distorting, and suppressing the human experience to this extent?

With more unknowns than knowns at this point, the signal of harm is growing and patient alignment with this model of care, diminishing.

I pulled some choice phrases from the paper for your further enlightenment below but suffice it to say that many of these side effects are major gamechanging problems if not life-ending tragedies that render the placebo-level performance of these medications totally unacceptable.

“Some of the most frequently reported side effects associated with the use of SSRIs and serotonin noradrenaline reuptake inhibitors (SNRIs) include nausea, diarrhea, dyspepsia, GI bleeding and abdominal pain.”

“Two main mechanisms may be involved in antidepressant- induced liver toxicity, namely a metabolic component and/or an immuno-allergic pathway. A hypersensitivity syndrome with fever and rash as clinical manifestations, as well as with autoantibodies and eosinophilia, and a short latency period (1–6 weeks) point to a predominantly immunoallergic pathophysiological mechanism, whereas a lack of hypersensitivity syndrome and a longer latency period (i.e. 1 month to 1 year) points to an idiosyncratic metabolic mechanism.”

“Notwithstanding the complexity of the clinical scenario, compelling evidence indicates that the use of most antidepressants may increase weight in a significant proportion of patients.”

“SSRIs and SNRIs may promote a decrement in heart rate variability (HRV). Although the impact of the effects of antidepressants on HRV remains to be established, data indicate that a lower HRV is a significant predictor of incident cardiovascular events.”

“SSRIs can cause urinary retention by acting on central micturition pathways. Serotonin may increase the central sympathetic outflow leading to urinary storage, and at the same time inhibits parasympathetic flow, which affects voiding.”

“…a significant body of data shows that antidepressants may differentially affect sexual function in multiple aspects, leading to reductions in libido, arousal dysfunction (erection in males and vaginal lubrication in females) and orgasmic dysfunctions.”

“The mechanisms of SSRI-induced hyponatremia remain incompletely elucidated, but these agents can act by either increasing the release of antidiuretic hormone (ADH) or increasing the sensitivity to ADH resulting in a clinical picture similar to the syndrome of inappropriate secretion of ADH.”

“The use of SSRIs has been associated with a reduction in bone mineral density (BMD) and a consistent higher risk of fractures.”

“All serotonergic antidepressants have been associated with an increased risk of bleeding. The most likely mechanism responsible for these adverse reactions is a reduction of serotonin reuptake by platelets, although other mechanisms have also been implicated.”

“All kinds of EPS [extrapyramidal symptoms] are seen in patients taking antidepressants, but akathisia appears to be the most common presentation followed by dystonic reactions, parkinsonian movements and tardive dyskinesia…Headache was one of the most common side effects associated with the use of antidepressants in a large retrospective cohort of adolescents and adults.”

“Most studies indicate that approximately 10% of patients on SSRIs may develop excessive sweating, although the incidence may be higher for paroxetine.”

“The SSRIs and venlafaxine are associated with increased REM sleep latency and a reduction in the overall time spent in the REM phase while sleeping.”

“Many patients taking SSRIs have reported experiencing emotional blunting. They often describe their emotions as being ‘damped down’ or ‘toned down’, while some patients refer to a feeling of being in ‘limbo’ and just ‘not caring’ about issues that were significant to them before…Furthermore, an activation syndrome in which patients taking antidepressants may experience anxiety, agitation, panic attacks, insomnia, irritability, hostility, aggressiveness and impulsivity in the first 3 months of treatment may ensue.”

“The incidence of suicide and attempted suicide has been a frequently underreported adverse outcome across antidepressant RCTs.”

“Patients with MDD are at increased risk of suicide and overdosing of prescribed medications is a common method used to attempted suicide.”

“Most of the data describing the presence of birth defects associated with SSRI use have been based on observational studies and drug registries. Therefore, the clinical significance of these data is questionable.”

“Preclinical studies have found that antidepressants can increase the growth of fibrosarcomas and melanomas, and may also promote mammary carcinogenesis.”

Whew! Now that’s depressing. And why don’t you know about these? Because your doctor doesn’t. I recently learned of a patient who was prescribed an antidepressant simultaneous to an antibiotic “just in case the antibiotic caused depression or mood changes”. We are trained to treat these medications as a “why not” application of pharmacology, and the truth is that, as the authors state:

…the history of toxicology reminds us vividly of the lag that often occurs between the first approval of a drug for use in humans and the recognition of certain adverse events from that drug.”

Taking these risks seems all the more unecessary with the robust outcomes of lifestyle medicine – multimodal, multi-tier interventions that are low cost, immediately available, and side effect free. As the authors conclude:

The findings of this review suggest that long-term treatment with new generation ADs should be avoided if alternative treatments are available.”

I would have to agree and affirm that these “alternative” treatments are indeed available. These treatments offer not only resolution of symptoms and elimination/avoidance of meds, but an entirely new experience of self. This is not about getting “back to normal,” it’s about integration, evolution, and vitality. I’ve been working for several years to make self-healing toolkits available to everyone considering an antidepressant or looking to come off of one for less than the price of one doctor visit. Check it out!