On December 24, 2014, I had a hysterectomy and bilateral oophorectomy that cured the PMDD I had been fighting for almost a decade. PMDD stands for premenstrual dysphoric disorder, which is a hormone-based mental illness with extreme manifestations and consequences. PMDD is a beast that can transform the most healthy and loving minds into wicked and self-loathing shells of consciousness. And it works that evil like clockwork, each and every month.

So why aren’t I celebrating my freedom from PMDD? My peace and equanimity have been restored. I no longer take any psych drugs. My only prescription is estradiol as a hormone replacement. I love my husband again. The crying fits are over. My motivation is restored. Suicidal thoughts are nothing more than a dark memory that lives in an ever more distant past.

I’m not celebrating because so many of my sisters are still stricken by this disease. They are pleading with general practitioners, OBGYNs, and psychiatrists for access to effective treatments. Yet they remain unheard. My sisters are remanded to the care of mental health professionals who ply them with therapy and scripts for SSRIs, SNRIs, and benzodiazepines, none of which offer long term relief from the horrors of PMDD.

Why are we still suffering when there is a cure? A hysterectomy and bilateral oophorectomy, a relatively inexpensive surgery that rarely has major complications, can permanently end our monthly misery.

I think there are many answers to the question above. First, many practitioners of medicine do not take the complaints of women seriously. Studies show that women’s reports of pain are commonly dismissed by physicians and women’s reports of disease processes are written off as psychosomatic.

This happens in the face of other studies that demonstrate that women, especially those of childbearing age, are affected by hard-to-diagnose autoimmune diseases at a much greater rate than men. Medicine has a very long history of ignoring the legitimate complaints of women. We are frequently handed psychiatric diagnoses before we are offered lab tests or diagnostic imaging.

Many ailments that were once thought to be psychogenic are now known to have a physical genesis. It wasn’t until the 1980s that h. pylori was demonstrated to be the mechanism behind peptic ulcer disease, which was previously blamed on stress. The 1980s also unveiled the etiology of Lyme disease. In the more remote past, epilepsy and Crohn’s disease were also once thought to be psychogenic.

The etiology of PMDD is not yet known. I suspect it is autoimmune in nature and is somewhat akin to an allergy to progesterone. But that is simply anecdote at this point. Another anecdotal observation I have made is that PMDD, dysmenorrhea, and other symptoms of hormonal disruption or intolerance are very common among women on the autism spectrum.

In medical terms, PMDD seems to be commonly co-morbid with autism. But we autistic women are still fighting for recognition because there is an ongoing misperception that autism is a condition that almost exclusively affects males. Autistic women, particularly those of us born before the 1990s, are commonly misdiagnosed with bipolar disorder or borderline personality disorder before reaching a point of accurate diagnosis. Obtaining effective health care as autistic women is an uphill battle that is especially steep and discouraging.

If research into PMDD continues to be set aside because it remains classified as a psychiatric disorder, most theories of PMDD causation will remain anecdotal. And in the meantime, more women will lose their quality of life or in some cases their actual lives.

Women affected by PMDD are discouraged and sometimes outright barred from access to the surgery that can cure us. Many physician’s perspectives are still so paternalistic that they do not believe we should be granted the freedom to part with our reproductive organs, even if those organs are destroying us.

We’re up against a lot in the effort to bring attention and research to PMDD. We’re up against a culture whose instinctual reaction to perceived ‘new’ diagnoses is gaslighting, which is the systematic repudiation of the report of the afflicted person, no matter how legitimate that report may be. Couple this propensity to gaslight people with ‘new’ disorders with a low regard for the credibility of women’s reports to their health care providers, and it starts to look like we have a very long and difficult road ahead of us in terms of awareness and research.

We also face proponents of toxic femininity, who tell us that PMDD is a cultural myth so that they can promote a fantastical feminine ideal where female hormones play no role in disease processes. I’m sure that all of the women with polycystic ovarian syndrome and endometriosis, syndromes that are also frequently co-morbid with PMDD, would love for that fantasy to be true, but unfortunately, it remains a fantasy.

So I’m not celebrating my 2-year anniversary of freedom from PMDD. I can’t celebrate while my sisters suffer. I will continue to use my online platform to advocate for recognition of and research into this disorder, because our complaints are valid, and we cannot remain unheard. 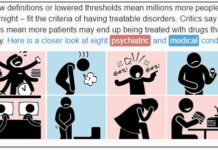 “For One Condition, the Drugs Came Before the Disorder” 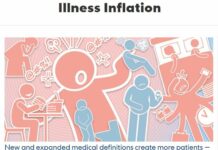 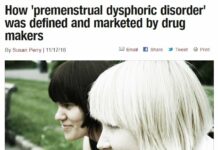 How ‘Premenstrual Dysphoric Disorder’ was Created by Pharma