Carrie Fisher recently died of a heart attack at age 60. There’s an important question here. Is she one of the cases in point to explain why our community has a 25 year lower life expectancy? How likely was it that her heart attack was caused by her psych meds? Or that her psych meds increased her risk of death once the heart attack happened? Well, the answer is, she had at least a 5 times greater risk of death during myocardial infarction than the general population.

Data from the European Heart Journal shows this:

So, we can look more carefully at her risk factors, and how this data affects anyone else on psych meds. Start with the NASMPD morbidity and mortality report. This is the famous report that explained that people with “severe” mental health labels die 25 years younger. Have you ever actually read that report? You should. It’s 87 pages of really solid data. A lot of it is actually good news that shows that very small lifestyle changes make a big reduction in risk. Like if you are 80 pounds overweight, just losing 10 pounds cuts your risk in half. The changes don’t have to be huge, which is very encouraging. Just 10 minutes a day of very moderate physical activity cuts your risk in half.

This “good news” is important for people with mental health labels, but we also have to be honest about the risk of psych meds, too. We have spawned a whole generation of Wellness Campaigns like SAMHSA’s 10X10 campaign which was supposed to increase our community’s life expectancy by 10 years within 10 years. But they ignored the psych med problem, which is the huge elephant in the room.

Even the original NASMHPD report gives a nod to the fact that psych meds might increase the risk of death. On page 6, it says

However, with time and experience the second generation antipsychotic medications have become more highly associated with weight gain, diabetes, dyslipidemia, insulin resistance and the metabolic syndrome and the superiority of clinical response (except for clozapine) has been questioned. Other psychotropic medications that are associated with weight gain may also be of concern.

For those not used to reading Administrator Nice Nice talk, this is what the quote says: 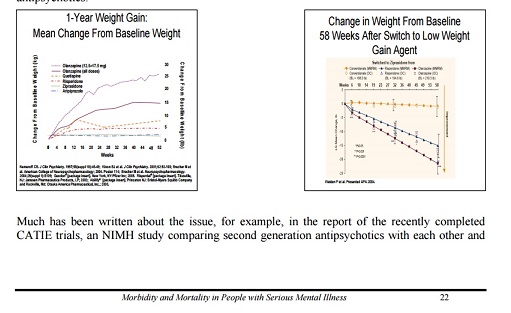 So the data shows that psych drugs increase 4 of the top 5 normal risk factors for cardiac disease: Weight gain, diabetes, high cholesterol, and even smoking (because it helps to relieve some of the numbness caused by the meds). But even more compelling is a study showing that in addition to all the the traditional risk factors caused by the drugs, taking the drug itself is a risk factor.

This is a very clear research study published in The European Heart Journal that took a large pool of people who had cardiac incidents and looked to see if they lived or died, and what drugs they were on at the time. This study confirms that combining antidepressants and old school antipsychotics causes an 18-fold increase in death during a cardiac event. Combining antidepressants with any antipsychotic causes an over 5-fold increase in relative risk of death during a cardiac incident.

We can compare the traditional five risk factors with the additional drug-induced risk factors by merging the NASMHPD data with the European Heart Journal data, shown below:

To put this in perspective, Vioxx was pulled from the market for a 2 fold increase in relative risk factor of strokes and heart attacks, and it may have killed 50,000 to 80,000 people during its stay on the market. How many heart attacks are being caused by psych drug combos? Well, let’s crunch the numbers using some back-of-the-envelope calculations or rounding estimates.

According to Medico, 17% of U.S. adults are now on psych drugs (26% of U.S. women!), nearly 10% of U.S. children.  To make rounding easier, let’s say this is 20% of the US population, and 1/3 of them take multi-drug combos. We start by factoring in the standard risk factors caused by the medication use, smoking, diabetes, high cholesterol, and high BMI. Each single risk factors roughly doubles the risk of heart attack, and combining them is worse.

But wait, there’s more; there’s not just extra heart attacks, there’s extra death during the heart attacks. We are looking at 5-fold and 18-fold increases in death during cardiac events here. Now, the American Heart Association reports about 326,200 people experienced out-of-hospital cardiac arrests (OHCA) in the U.S. in 2011. From that site, Based on the Resusciation Outcomes Consortium data, Survival after bystander-witnessed cases with a first recorded rhythm of VF was 53.3%. But these numbers are 5-18 times lower for people on psych drug combos. So let’s say 10% survival rates, or 90% deaths for those on med combos.

Like all good back-of-the-envelope calculations, we can verify this number with a different data set, For instance the NASMHPD report (p. 13) lists a Massachusetts study that shows that people with “severe” mental health diagnoses had a 6.6-fold higher mortality rate from cardiovascular disease than the general population. The percent of people with “severe” mental health diagnoses is roughly 2-5% depending on which evaluation you use.

Either way, we are talking about a lot of people dying from their psych meds. And Carrie Fisher could well have been one of them.

The European Journal research article talks in depth about why this risk is so much higher. It talks about how the drugs themselves cause arrythmias. They mention that people taking benzos, which do not cause arrhythmia, did not show an elevated risk of death. They mention that people taking psych meds are much more likely to have heart attacks at night rather than during the day when fewer people are watching with defibrillators handy. Or, in the case of Carrie Fisher, who had a cardiac incident on an airplane, with delayed access to help.

The study even discusses that it was probably the drugs, and not the “mental illness,” that causes the increase in death rates:

The use of cardiovascular drugs, such as aspirin, beta-blocking medication, and angiotensin-converting enzyme inhibitors, was less common among the victims of SCD. However, the difference in the use of psychotropic medication, which was  The main focus of the present study, remained significant after adjusting for the use of other medications and other confounding variables.

Previous studies have shown that mental Disorders increase the risk of cardiovascular mortality, 3 – 7 but it has not been clearly established if  Psychiatric disorders, such as depression or schizophrenia, predispose to the occurrence of cardiovascular events or whether they modify The outcome during such events. The present results support the latter proposal, Since it was found that the subjects using psychotropic drugs had a higher risk of dying during an acute coronary event, with fatal arrhythmia being the most probable cause of SCD during the ischaemic event. This concept is also supported by studies showing that depression increases specifically the occurrence of SCD but not non-fatal cardiac events.

There are other important lessons to take from this data:

We need to address this data much more carefully if we want to stop cardiac deaths among people with mental health labels. You can’t just run “blame the victim” wellness campaigns that look at lifestyle stuff. If you really want to address life expectancy discrepancies and untimely deaths, you need to look at reducing psych drug use.

Carrie Fisher, Bipolar Disorder, and the Spread of False Information