We seldom have a chance to hear from someone who combines the perspective of a longtime psychiatric survivor and activist with that of being a psychiatrist! So, I was happy to read this heartfelt book by Daniel Fisher, where he brings together an integrated vision of what a wise and humanistic approach to mental and emotional crisis might look like. 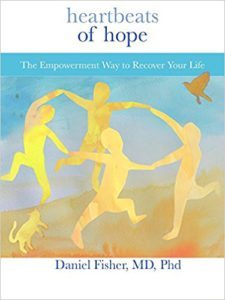 Daniel starts by sharing his personal story, and that fascinating story alone is enough to make the book worth reading! He outlines a variety of factors in his earlier experience that set him up for having a severe crisis, such as his taking on the role of “golden boy” in his family, the sexual abuse he received from a teacher, and his later efforts to suppress his feelings which he believed were interfering with his thoughts. He then describes his “descent into the maelstrom” which left him mute and catatonic, followed by his being hospitalized and diagnosed with “schizophrenia.” And then he describes what led to his recovery.

But few who recover become psychiatrists! Daniel clarifies that this was not easy, as most psychiatric training is not set up to support those with humanistic inclinations, much less psychiatric survivors. He wrote that “it seems that professional training and elevation in status tends to select out the qualities most essential for helping another human being through a crisis.” But then when he sought support through a peer group, he found that now it was being in psychiatric training that was creating a barrier to fitting in and getting support! The Mental Patient’s Liberation Front (MPLF) informed him that he could only attend as an ex-patient, not as a psychiatric resident, but he felt unable to go as only half of himself. Later, a group formed called Friends of MPLF, and he was finally able to get the support he needed and meet people like Judi Chamberlin, with whom he later collaborated.

While “schizophrenia” is often thought by professionals to be a “thought disorder,” Daniel’s story illustrates the way difficulty in relating to affect, to feelings and emotions, can really be at the root of the apparent “symptoms.” As Daniel recovered, he learned to accept his feelings and his relations with others as central to his existence, and then this perspective informed his treatment approach once he did become a psychiatrist.

Regarding relations with others, he wrote that “something about being in deep relationship allows the variety of my seemingly independent selves to come together into a community of selves that I call my self.”

The later parts of the book explore what mental health care focused on healing looks like.  He emphasizes supporting personal empowerment, the promise of dialogical approaches, and the basic process of attunement through “emotional CPR.” Detailed examples of how these approaches work are included.

As I read the book I noticed myself disagreeing with only one significant point. That was in regards to a statement made that a person does not have to be off all medications to show “complete recovery” from “mental illness.” This notion is supported by pointing out that many in our society take psychiatric drugs but maintain their social role and are not considered “mentally ill.”

I found that way of talking about the issues to be unclear and unhelpful. First, I don’t think we should frame anyone as being in recovery from “mental illness” as that term is, as Daniel himself admits, not very helpful to describe what people go through.  And if we describe it instead as being a mental and emotional crisis, then it seems a bit contradictory to say that one is “fully recovered” from such a crisis and yet still in need of medical assistance. It may be fine to point out that a person is no longer disabled by the crisis and is functioning as well as many who have never been hospitalized but who are taking psych drugs themselves to cope with less extreme mental or emotional difficulties; but I would reserve the term “full recovery” for getting to a place where no further “mental health” assistance is needed. I think this is important, because we need to make it clear in the way we speak that outcomes where drugs are no longer needed are possible. This is essential if we are to fight back against the system’s tendency to hook people on drugs without much hope of ever getting off. Claiming that people still reliant on drugs are already “fully recovered” suggests that no further recovery is possible, and thus tends to cut off hope that getting off the drugs successfully might be possible.

There are those of course who would frame the whole concept of “recovery” as unhelpful, and as a term co-opted by the mental health system. I would agree that there are problems with the term and with the way its meaning has often been twisted, but I think it remains important as something to talk about when offering much needed hope to people from whom almost all hope has been stolen. “Heartbeats of Hope” makes a strong contribution to a possible future when hope for recovery will be kept alive within mental health treatment, and people in crisis will be offered human relationships and help in resolving the crisis, instead of being offered the currently popular mix of coercion, lies, and attempts to use drugs to suppress any and all unwanted responses to life difficulties.