In my experience, what gets called projective identification can be described in these examples:

First, if I’m not consciously aware that I’m feeling afraid and ashamed, because to acknowledge the existence of those blocked emotions to myself would make me feel too vulnerable, it’s possible that via projective identification I can somehow directly or covertly affect you so that you feel afraid and ashamed too.

The purpose of doing that is because in the instant I perceive that I’ve succeeded in inducing fear and shame in you, I can feel a palpable relief from my own fear and shame. That relief may come because I suddenly don’t feel so alone with what’s going on inside me, even though I can’t name those emotions to myself yet. It’s also possible the relief comes about by going from feeling internally victimized by my painful emotions to feeling unburdened by passing them off to another — much like the proverbial “hot potato.” Relief may also result from a kind of vengeful displacing of my own emotions of fear and pain by lodging them in someone else to carry and embody, much as an insecure bully likes to see the fear on the faces of those he torments.

Conversely to the above examples about unconscious fear and shame, if I’m feeling happy or hopeful but may not be able to allow that emotional awareness into consciousness because of an unconscious belief in my own unworthiness, I may say or do something in a way that induces happy or hopeful emotions in you. I can then feel relief as those emotions now are present in the interpersonal space between us, albeit seeming to reside in the other person, not myself.

This process, which has been called projective identification, was first noted by Freud’s follower Melanie Klein. It is a more complex phenomenon than what’s referred to in the old adage, “misery loves company.”

It’s also more complicated than simple projection — when a person simply projects unacceptable aspects of themselves onto someone else in a demonizing way, as in the common kind of self-deception projection that sounds like: “That person out there is very dishonest but I am never dishonest!”

As RD Laing described how the process of projective identification differs from projection:

“The one person does not use the other person merely as a hook to hang projections on. He/she strives to find in the other, or to induce the other to become, the very embodiment of projection.”1

I gradually learned as a therapist in the 80’s to be aware of when a person I was with seemed to be mysteriously able to create distressful or unbidden upbeat emotional states in me — states that they were themselves subjectively feeling, but weren’t fully aware of.

Sometimes, when they would project their unconscious anger, fear, guilt, shame, inadequacy or other difficult emotions through an almost inescapable and subtly imperceptible, hypnotic-like induction move, it would cause me to identify with those emotions and feel them too.

By first recognizing the possibility of being on the receiving end of such a complex and very often unconscious process, I learned how to let that projected emotional experience of another person come into me psychologically, and then to let it go out of me. It’s important to note that this so-called projective identification experience, for me, was qualitatively different than the more familiar experience of empathically tuning into another person’s emotional reality to better understand what they are feeling. That empathic process of “putting myself in the other person’s shoes” is the prerequisite for the next crucial step of feeling compassion.

But when a projective identification is sent out and internalized, it turns out that being aware of that unique experience can also be valuable for me to have a sense of what the other person might be experiencing internally.

The short term gratification and relief of them successfully getting me to feel what they were unconsciously feeling, as described in the examples above, was outweighed by my willingness to feel it in the service of helping them become more consciously aware of what they were in fact really feeling and projecting. But I never interpreted the emotional clues I was getting that felt like a projective identification was going on with proclamations based on some bogus authority, authority that would presumptuously set me up as the arbiter and know-it-all explainer of their subjective experience.

The new client who came to see me one afternoon was in their late 20’s. When we met and sat down together for the first time they immediately asked me, “Where’s my patient chart, didn’t you bring it here in the room?”

“No,” I said. “It’s still in the chart room — I haven’t looked at it. I like to meet people without reading all the preceding opinions about them.”

“Then you don’t know that I’ve fired seven therapists in the past year!”

“You don’t even know what I am? What my diagnosis is?”

“No, I’m not really into viewing people as a diagnosis.”

They suddenly got up and came to stand over me a few feet away and in a very loud voice declared:

“Well let me tell you then: I am the most flaming and famous borderline personality in this whole chickenshit mental health system of yours! And to prove it to you, mister laid-back Cornwall, the next time I visit you here, I’ll get up on the roof of this clinic and put a shotgun in my mouth for you to see just before I pull the trigger! What do you say to that, Michael Cornwall?”

I felt fear, and felt my breathing catch and my muscles tense in my shoulders and stomach.

And I became very grateful that I’d previously spent several years as a therapist in a 20-bed medication and diagnosis free sanctuary with people who were all going through incredibly emotionally intense extreme and altered states. There, I learned out of necessity how crucial it was for my subjective emotional state to be open and receptive and in touch with genuine caring, in order to help people in extreme states feel safer, and for them to be free to express and traverse their powerfully emotional and symbolic transformational process.

So, I went ahead and relaxed my muscles, took a deep breath and said to the new client still looming over me:

“I’m very sorry you’re suffering now. I hope I may be able to be of some real help to you.”

“What! No calling the police right now to come grab me, after hearing about my suicidal ideation, intent and plan as you quacks like to call it?”

“No, no calling anyone.”

They just stared down at me.

Then they backed up and sat in their chair.

They slowly shook their head and began to softly laugh. “Where in hell did you come from? You’re supposed to be running for the door about now!”

“From a different place than your last seven therapists, I guess!” I said, and we smiled at each other and both laughed out loud.

After that we saw each other regularly for many months.

These old memories have come to mind for me lately when I feel myself absorbing the many projective identifications flying around on TV, Facebook, Twitter, YouTube, cable news, the internet and in the newspaper every day. Those publicly expressed projective identifications, aimed at making us feel as intensely afraid or helpless as the persons sending them are feeling, do work temporarily on me. I do feel afraid when I take them in.

But I can feel some relief when I recognize them for what they are and intentionally let them go again, emotionally.

Unlike with the people who come to see me for therapy, I don’t feel compassion when strangers, talking heads and politicians make me feel afraid on purpose — even when they’re doing it to make themselves feel better.

“Ontological Insecurity” May Play A Role in Psychotic Experiences 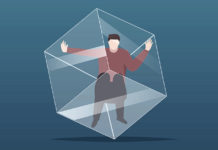 My Son and the “Mental Health” System 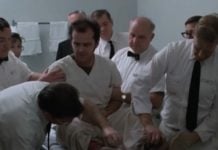