This week on MIA Radio, we interview Amanda Burrill. After a successful career as a Surface Warfare Officer and Rescue Swimmer in the United States Navy, Amanda was on track to continue her career as a professional triathlete and marathon runner, as she had already been competing internationally while still in uniform. Around the time of her discharge, she was prescribed a cocktail of psychiatric medications that caused physical injuries, leading to an early end to her rapidly accelerating career.

Amanda completed a Masters degree in Journalism from Columbia University, a culinary arts degree from Le Cordon Bleu in Paris, and continued her work as a travel and culinary journalist; all while surviving a cocktail of over a dozen psychiatric drugs over eleven years.

While being treated for a traumatic brain injury (TBI) by specialists at New York University in 2018, Amanda’s doctors raised concerns about the selective serotonin reuptake inhibitors (SSRIs), benzodiazepines, stimulants, sleeping medications and mood stabilizers concurrently prescribed to her by the Department of Veterans Affairs. Over the next 12 months, Amanda was successful in withdrawing from her cocktail of meds, which included the SSRI Zoloft. She now sees it as her mission to ensure that what happened to her does not happen to others. 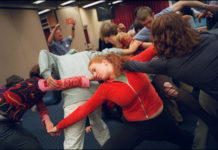