Editor’s Note: Over the next several months, Mad in America is publishing a serialized version of Peter Gøtzsche’s book, Mental Health Survival Kit and Withdrawal from Psychiatric Drugs. In this blog, he discusses some final issues with psychiatry, its drugs, and electroshock. Each Monday, a new section of the book is published, and all chapters are archived here.

Use of depression pills for children dropped 41% in Denmark

Here comes a little glimpse of hope in defiance of the dark hole of psychiatry, which absorbs all rational thought like black holes in the cosmos absorb everything that comes near them.

It is possible to revert the ever-increasing trends in usage of psychiatric drugs if you are similarly tenacious as John Read was in relation to the UK Royal Society of Psychiatry.

Due to concerns about the suicide risk, the Danish National Board of Health reminded family doctors in the summer of 2011 that they should not write prescriptions for depression pills for children, which was a task for psychiatrists.168 At the same time, I began to warn strongly against the suicide risk of the pills. I repeated my warnings countless times in the following years on the radio and TV, and in articles, books and lectures.

It started with an interview with the managing director of Lundbeck, Ulf Wiinberg, who, in 2011, claimed that depression pills protect children against suicide. The interview took place while Lundbeck’s US partner, Forest Laboratories, was negotiating compensation with 54 families whose children had committed or attempted suicide under the influence of Lundbeck’s depression pills. Elsewhere, I have described Lundbeck’s irresponsible behaviour, also in relation to a paper I published about the interview.4

In Norway and Sweden, there have been no such initiatives. The number of children in treatment increased by 40% in Norway (0-19 years) and 82% in Sweden (0-17 years) from 2010 to 2016, while it decreased by 41% in Denmark (0-19 years) despite the fact that professors of psychiatry also in Denmark continued to propagate their false claims that depression pills protect children against suicide.169

The Danish National Board of Health had issued several warnings against using depression pills to children before 2011. I therefore believe it is primarily due to my tenacity that the usage went down in Denmark. I say this to encourage people to fight for a good cause. Despite the formidable odds, it is possible to change things in psychiatry for the better. Not much, but we must not give up the fighting. 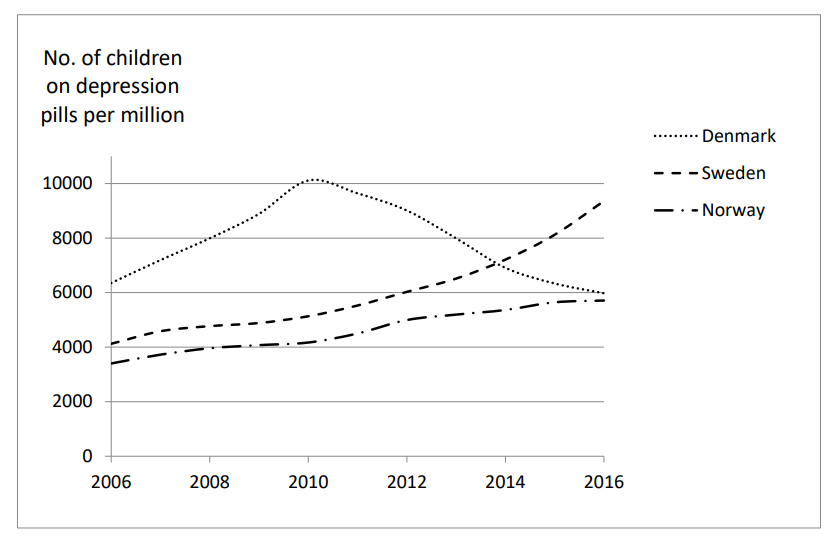 It is standard in psychiatric research articles to mention the number of patients that need to be treated (NNT) to benefit one of them. The psychiatrists mention NNT all the time as evidence that their drugs are highly effective. But NNT is so misleading that you should ignore everything you read about it.

Technically, NNT is calculated as the inverse of the risk difference (it is actually a benefit difference), which is very simple. If 30% have improved on drug and 20% on placebo, NNT = 1/(0.3-0.2) = 10. Here are the main problems:

First, NNT is derived from seriously flawed trials, with cold turkey withdrawal in the placebo group, insufficient blinding, and industry sponsorship with selective publication of positive results and data torture.

Third, NNT opens the door to additional bias. If the chosen cut-off for improvement does not yield a result the company’s marketing department likes, they can try other cut-offs till the data confess. Such manipulations with the data during the statistical analysis, where the prespecified outcomes are changed after company employees have seen the data, are very common.4,51,101,184

My research group demonstrated this in 2004 by comparing trial protocols we had acquired from ethics review committees with the trial publications. Two-thirds of the trials had at least one primary outcome that was changed, introduced, or omitted, while 86% of the trialists denied the existence of unreported outcomes (they did not know, of course, that we had access to their protocols when we asked).184 These serious manipulations were not described in any of the 51 publications.

Fourth, NNT is only about benefit and completely ignores that drugs have harms, which are much more certain to occur than their possible benefits.

Fifth, if benefits and harms are combined in a preference measure, it is not likely that an NNT can be calculated because psychiatric drugs produce more harm than good. In this case, we can only calculate the number needed to harm (NNH). Drop-outs during trials of depression pills illustrate this. Since 12% more patients drop out on drug than on placebo,114 the NNH is 1/0.12, or 8.

The UK silverbacks did not take any of these flaws into account when they claimed that depression pills have an impressive effect on recurrence, with an NNT of around three to prevent one recurrence.182 It is not surprising that patients want to come back on the drug when their psychiatrists have thrown them into the hell of acute withdrawal by suddenly substituting their drug with placebo. As only two patients are needed to get one with withdrawal symptoms,57 there cannot exist an NNT to prevent recurrence, only an NNH to harm, which is two.

Nor can there exist an NNT in other depression trials, as the difference between drug and placebo in flawed trials is about 10%,4 or an NNT of 10, which is far less than the NNH. For example, the NNH for creating sexual problems is less than two for depression pills.

Similar arguments and examples can be produced for all psychiatric drugs. Thus, the NNT in psychiatry is bogus. It doesn’t exist.

As this book is about drugs, I won’t say much about electroshock.4 Some patients and psychiatrists say it can have a dramatic effect. This could be true, but the average effect is less impressive, and if electroshock were effective, people wouldn’t need to receive a long series of shocks, which is usually the case. Furthermore, the shock effect doesn’t last beyond the treatment period, and electroshock “works” by causing brain damage, which is scary.4

Once, I was asked at a meeting what my view was about a woman who was so depressed that she could hardly be contacted but asked for a glass of water after an electroshock. I said that since this was an anecdote, I would reply with an anecdote. I was once asked to look after a newly admitted man, an unconscious alcoholic. As I needed to rule out meningitis, I tried to insert a needle in his back to tap cerebrospinal fluid for microscopy and culture. It was very difficult to get in and I hit his bone several times. All of a sudden, the drunkard exclaimed loudly: “Bloody hell, stop stinging me in the back!”

Had I caused a miracle with my needle and cured the guy? No. Odd things happen all the time in healthcare. Could I have woken up the deeply depressed woman with my needle? Who knows, but why not?

Psychiatrists often say electroshock can be lifesaving, but there is no reliable documentation for this claim, whereas we know that electroshock may kill people.4 Furthermore, it can lead to severe and permanent loss of memory, which leading psychiatrists fiercely deny can happen,4,23 even though it is well documented that electroshock leads to memory loss in most patients.4,185-187

I find it totally unacceptable that electroshock can be enforced upon patients against their will, because some patients will die, about 1 per 1000,186 and others will suffer from serious, irreversible brain damage.4,23

To read the footnotes for this chapter and others, click here.