New research indicates that voice-hearers are at risk of epistemic injustice, are dismissed as unreliable sources of knowledge, and lack societal frameworks to understand their experiences meaningfully. The study, published in the British Journal of Clinical Psychology, explores how voice-hearers inside and outside the mental health system experience epistemic injustice.

The qualitative study results revealed that those who hear voices are highly stigmatized, lack a meaningful societal structure to make sense of their voice-hearing outside of the medical model, and are viewed as uncredible sources of knowledge. Despite this, access to spaces or “safe harbors” where voice-hearers experiences were validated and normalized was found to protect against the adverse effects of epistemic injustice.

The researchers, led by Pamela Jacobsen of the University of Bath, write:

“Research has highlighted the particular difficulties voice-hearers can have making sense of their experiences and integrating these into their self-understanding. Voice-hearers in receipt of mental health care, or ‘clinical’ voice-hearers, have reported having to explain their voices by adopting concepts that they may not feel entirely represent their experience, such as medicalized approaches, and being disempowered in conversation with professionals, causing distress and reinforcing self-perceptions of being ‘not normal.’” 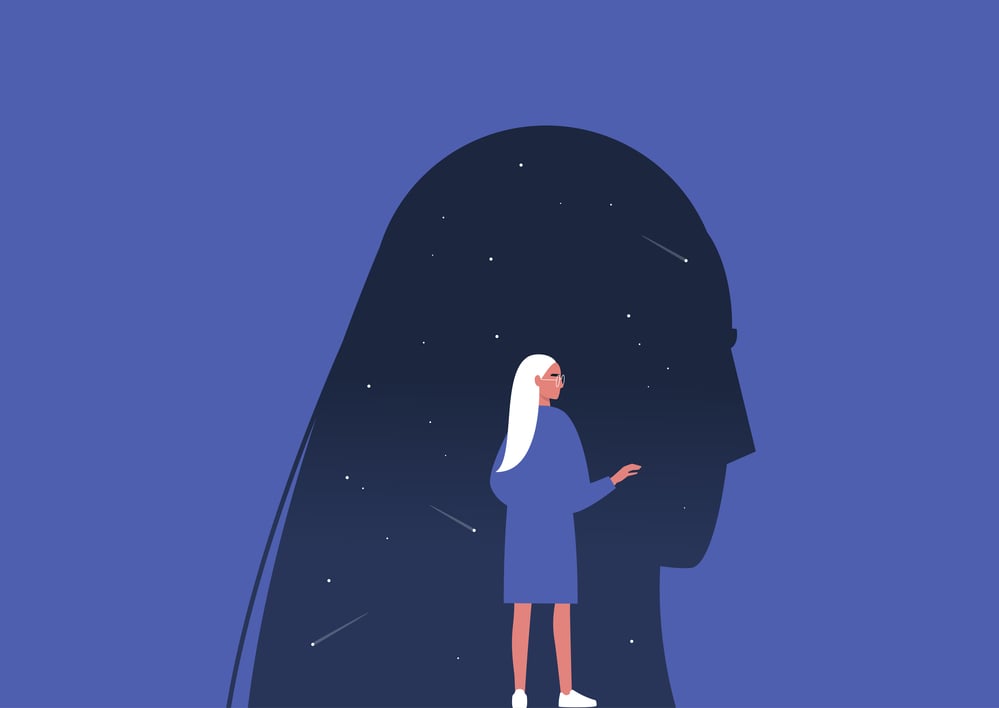 Seventeen participants, divided into a “clinical” group and a “non-clinical” group, were recruited to participate in the study. The clinical group consisted of eight individuals actively engaged in mental health treatment. It was comprised primarily of women (4) from White, Western backgrounds, with ages spanning from 18 years old to over 70 years old. Participants in this group had been hearing voices for over a year.

The non-clinical group included individuals who had never received mental health treatment for their voice hearing. It consisted of nine participants, mostly women (6) from primarily White, Western backgrounds, with ages ranging from 25-69. Participants in this group had all heard voices for at least five years.

Jacobsen and colleagues conducted qualitative interviews with participants asking about their lived experience of voice hearing. The interview content was examined using thematic analysis to identify overarching themes across participants’ responses. The research team included a trainee clinical psychologist, two clinical psychologists, a psychiatrist, and an individual who hears voices.

Researchers identified themes of changing identity, relationships, and social position across clinical and non-clinical groups. Each theme was represented along a continuum; for example, in the changing relationships theme, participants spoke of a desire to be “normal” and a sense of feeling “protected and treasured.” The continuums reflected across themes demonstrated a mirroring effect between participants in the clinical and non-clinical groups.

The changing identity theme encompassed a spectrum of feeling “reduced to a label” for individuals in the clinical group to believing “I am more than I was before” for persons in the non-clinical group.

Researchers described how participants in the clinical group found that their sense of identity had been “obliterated and replaced by their identity as a voice-hearer.” They write:

“Participants found this cascaded from their past into their present and the future, eradicating previous achievements and skills, limiting future opportunities and relationships, and defining how they were seen by others and saw themselves in the present. Social narratives of voice-hearers as violent, dangerous, abnormal, and untrustworthy dominated social interactions and their new sense of self, with participants experiencing high levels of stigma which, by being internalized, shaped how they saw themselves.”

“I suppose I…  I didn’t want to be viewed as insane or mad or weird cause no one wants to be perceived as weird or odd or sort of societally unacceptable um they want to sort of fit in and be accepted, and it’s quite hard to think that potentially you might not.”

This contrasted with the experiences of those in the non-clinical group, who described feeling as if they were “treasured within a loving and safe community.” For these participants, their voice-hearing increased their contact with others, allowed them to find a community where they were accepted and loved, and enabled them to strengthen their interpersonal relationships. Yet, despite this “safe harbor” of a community, participants also noted that they realized they were marginalized by mainstream society and that leaving the safe community could lead to danger.

The final theme related to changing social power and position. Clinical and non-clinical participants’ experiences varied; participants in the clinical group shared being “trapped at the bottom of the social ladder,” whereas those in the non-clinical group discussed the “precarious honor of being placed on the pedestal.” However, both groups described being cast as “unreliable narrators” and struggling to initially make sense of their voice-hearing due to a lack of societal concepts to make sense of their experiences.

“Voice-hearers felt forced into using the only available concepts to put words to their experience and thus had to draw on a medicalized approach which they felt at odds with and pressured into using. However, some voice-hearers went on to find a community, such as a spiritualist church or the hearing voices network, where they met other voice-hearers and were given concepts, skills, and a language that allowed them to make sense of what was happening. These safe communities served as a sort of lighthouse, guiding them toward safe waters and protecting them against hermeneutical injustice. Thus, the ability to find some sort of community, even if they were rejected by mainstream society, was crucial to recovery for both groups.”

Limitations of the study include using one researcher to code the interviews, which runs the risk of potential bias, and its predominantly White, western sample. In addition, given that the sample was limited in diversity, the results may not be applicable to members of ethnic groups or cultures that were not included in the sample.

The inclusion of participants from diverse backgrounds is essential to the study of perceptions of voice-hearing, as research elsewhere shows racial disparities in the diagnosis of schizophrenia in Black versus White individuals, which contributes to the overdiagnosis of schizophrenia in Black patients who are also more likely than their White counterparts to be subjected to forced psychiatric hospitalization in the United States and Canada.

The researchers challenge mental health professionals to work toward empowering their clients by working to dismantle epistemic injustice rather than perpetuating the status quo. They call for widescale change to the mental health system itself, such as through the increased use of peer-support approaches, to create “safe harbors” for clients where they are believed and provided with frameworks that help them to make sense of their voice-hearing that is not entrenched in medical model understandings.

They also recommend that initiatives be taken to address stigma and marginalization of those hearing voices, including addressing internalized stigma and improving self-esteem. They suggest that further research be conducted on the experience of epistemic injustice with individuals experiencing other mental health struggles to allow for a deeper understanding of how it impacts individuals across the mental health system and so that professionals can begin to address epistemic injustice both individually and systemically.

Changing perspectives on how society views those that hear voices is critical to enacting widespread change. A major misconception of voice hearing is that it is always associated with distress or impairment; lack of attention tends to be given to the positive impacts that hearing voices can have on an individual’s life, such as being viewed as a spiritual experience.

In fact, research has identified a number of factors – including the individual’s context, language, and social stigma – that play into how a person experiences hearing voices. Increasing attention has been given to peer-support groups like Hearing Voices Network, which emphasizes the importance of de-pathologizing voice-hearing and providing a sense of community and social support, which, as outlined in the study reviewed, are critical protective factors against the harmful effects of epistemic injustice.