An issue that we think deserves more media attention than it is currently receiving is the idea of Preventive Intervention in Psychiatry.  The goal of Preventive Intervention is to reduce the rate of psychiatric diagnoses in an at-risk group of people by pretreating all the group members with a medication. For instance, could the rate of PTSD in the military be reduced by pretreating everybody in the military with an SSRI?

Even if a pretreatment plan is successful in reducing the rate of diagnoses in a given group, there is an obvious downside.  To reduce the rate of diagnosis for a minority of the group, the majority of the group must start a lifetime course of treatment for a condition they would never develop. While there are good examples of disease prevention in general medicine – the polio vaccine comes to mind – it is clear at this point that antidepressants are not vaccines.

One research team, directed by Dr. Robert Robinson, is conducting studies on how to prevent depression from developing in patients who have had a stroke.  Their reasoning is as follows: If we know that 20%, or some such number, of stroke patients eventually go on to develop depression, can we reduce this percentage by pretreating the entire stroke population?  If we pretreat the entire population, then maybe only 10%, rather than 20%, will go on to develop depression.

One of the major studies that this group published was in JAMA in 2008.  And “Yes” it was the same study that caused an uproar in the press and eventually led the JAMA editors to try and enact a very questionable policy restricting freedom of speech.  But this is off topic.

The study in question examined the use of Lexapro and problem solving therapy for post stroke depression.  Both treatment groups had better outcomes than the placebo group.  Specifically, in each group the reported incidence of minor depression was: Lexapro, 8.5%; Problem-Solving Therapy, 11.9%; and Placebo, 22.4%. The study concluded that, “Patients who received placebo were significantly more likely to develop depression than individuals who received escitalopram (Lexapro).”  As reported in the paper, based on the frequency of depression during the first year of treatment, 7.2 acute stroke patients would need to be treated with Lexapro to prevent one case of minor depression.

When the study was first designed, the protocol submitted to NIH, per grant R01MH065134, called for a four-arm study using Nortriptyline, Celexa, psychotherapy, and placebo.   Celexa and Lexapro are both manufactured by Forest Pharmaceuticals.   Forest’s patent for Celexa expired in July of 2003. In 2002, Forest spent a significant amount of money on the marketing plan for Lexapro which is a very similar medication to Celexa and has been referred to as a “patent extending” variation of Celexa.  By the time of patient enrollment for the post-stroke study, it had become a three-arm trial with Lexapro, psychotherapy and placebo. The paper states that escitalopram (Lexapro) was used instead of citalopram “because of empirical evidence” of possible superiority. Two references are cited. The first (Tamminga et al) is a “thought piece”, not empirical evidence, and does not mention escitalopram (Lexapro). For the second citation, a Lundbeck sponsored study published in 2005, it is hard to see how it informed a decision to switch from Celexa to Lexapro made in 2003. Nortriptyline is not mentioned although Robinson’s study published in 2000 supports superior efficacy of nortriptyline over fluoxetine. In 2009, Lexapro cost over 5 times as much as nortriptyline and over twice as much as generic citalopram.

Following the post-stoke study’s publication it was featured on several media outlets. On Fox News, an academic psychiatrist stated: “Dr. Robinson’s work supports a novel way of preventing such suffering and disability.” The article also stated that “he hopes doctors will start prescribing preventive antidepressants to stroke patients.”

In the USA today, Dr. Robinson was quoted as saying, “I think every stroke patient who can tolerate an antidepressant should be given one to prevent depression.” The paper also reported that Dr. Thomas Insel, the Head of NIMH, disagreed with this statement.

The idea of preventing disease from developing in susceptible populations by administering a medication raises questions about the future of medicine – not just psychiatry.  For instance, could we decrease the rate of coronary heart disease by giving everybody over 45 years of age low doses of statins? Most importantly, what is the harm-to-benefit ratio involved with prescribing antidepressants to all stroke patients, especially when the vast majority of them will not develop depression following the stroke even if left untreated? Given a 3% difference between medication and therapy, why not just offer problem-solving therapy universally?

When it comes to psychological health, surely stroke patients are not the only susceptible population.  Now that the bereavement exclusion is gone from the DSM-V, should we prescribe a prophylactic course of antidepressant therapy for anyone who has lost a loved one? Even if a prevention plan reduces the number of people who eventually receive a diagnosis of depression what about all the healthy people exposed to a medication’s side effects?

In a 2009 editorial, in The British Journal of Psychiatry, titled, “Prevention of First-Episode Depression: Progress and Potential” Dr. Robinson and Ricardo Jorge discuss the idea of preventive treatment for psychiatry.  In the introduction they state, “The Institute of Medicine Committee on Prevention of Mental Disorders recommended in 1994 that prevention intervention defined as an intervention before the patient receives a diagnosis.”  And in their conclusion they state, “Perhaps three months of antidepressants administered to 20- or 30-year olds with no physical illness or history of mood disorders or to 60-year olds might block the effects of subsequent depressions or physical illness with associated depression on morbidity or mortality. Obviously only empirical data can answer these questions, but as preventive interventions in psychiatry continue to emerge, we should not set our sights too low.”

This idea of prescribing antidepressants for people who do not meet the criteria of a psychiatric diagnosis but who meet the criteria for membership in another group, that happens to have a higher than average rate of diagnosis is worthy of debate.  What about other high risk groups? Should we medicate all the veterans returning from Irag, all the pregnant women in the country, and all the children in foster homes?  Where do we stop? At some point in our lives we probably all fall into a high-risk group. 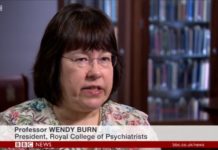