Congratulations. Yet another Spotlight article has surfaced: A depleted state system fails many with mental illness. And, with it, you’ve really nailed the earth shattering concept that… bad things happen. What’s next? Fire keeps you warm, but it sure can burn? Water looks pretty, but you can also drown?

In this edition you detail several stories of lives gone awry, all of them involving people who were receiving Massachusetts Department of Mental Health (DMH) services at the time. Someone fatally wounded after being hit by a car. Another person seriously injured after jumping out the window of the program where they lived. Innocent bystanders occasionally caught up in the confusion.

Most of your other articles have been about how people are getting hurt because of lack of services. Yet now you’re saying that much of the same stuff happens when they get services, too. You continue to regurgitate the same idea that more is the answer. But I wonder why you believe that to be so. Your investigative team — so supposedly invested in ‘the facts’ — never really cite any clear information on that point.

Before we move forward, I’d like to take a brief retrospective journey with you: I’ve tried addressing this (and you) from several angles. In my first ‘Dear Boston Globe’ post, You are the Failure You Describe, I spoke to the problems with your overall approach (preying on everyone’s worst fears and emotions). In my follow-up, You Forgot the Facts, I went into detail about how you were misusing and misrepresenting statistics. In part three (We Came. We Protested. You Still Didn’t Listen.), I went point-by-point as to where the Globe’s perspective seems to differ with the movement of which I am a part. Next came A Taste of Your Own Medicine where I presented some dramatic stories about how the system you so support has often done more damage than good. And, in what should have been my last piece (Thanks for Nothing) I questioned the ‘solutions’ you offered up with both personal accounts and facts. Meanwhile, I also managed to publish and editorial in the Globe itself (How We’re Missing the Real Story) offering up some local ‘solutions’ that you’ve thus far ignored.

And I’m not the only one who has spoken up. It wouldn’t make sense to listen if it were only me. Countless people have offered alternative perspectives in letters to the editor, and on the Spotlight’s own Facebook group. The actual facts are also on our side. Has any of it even put a dent in your approach? It doesn’t seem so.

I feel like we should be old friends by now: Jenna Russell. Scott Helman. Maria Cramer. Todd Wallack. Michael Rezendes. Scott Allen. (Scott, I’ll forever remember our brief conversation about the ‘hogtied’ woman in your prior Spotlight article, and how you said it just never occurred to you that referring to a woman as hogtied after a suicide attempt was potentially problematic. That memory will always hold a special place in my heart.) Perhaps had we met under different circumstances… Then again, perhaps not. 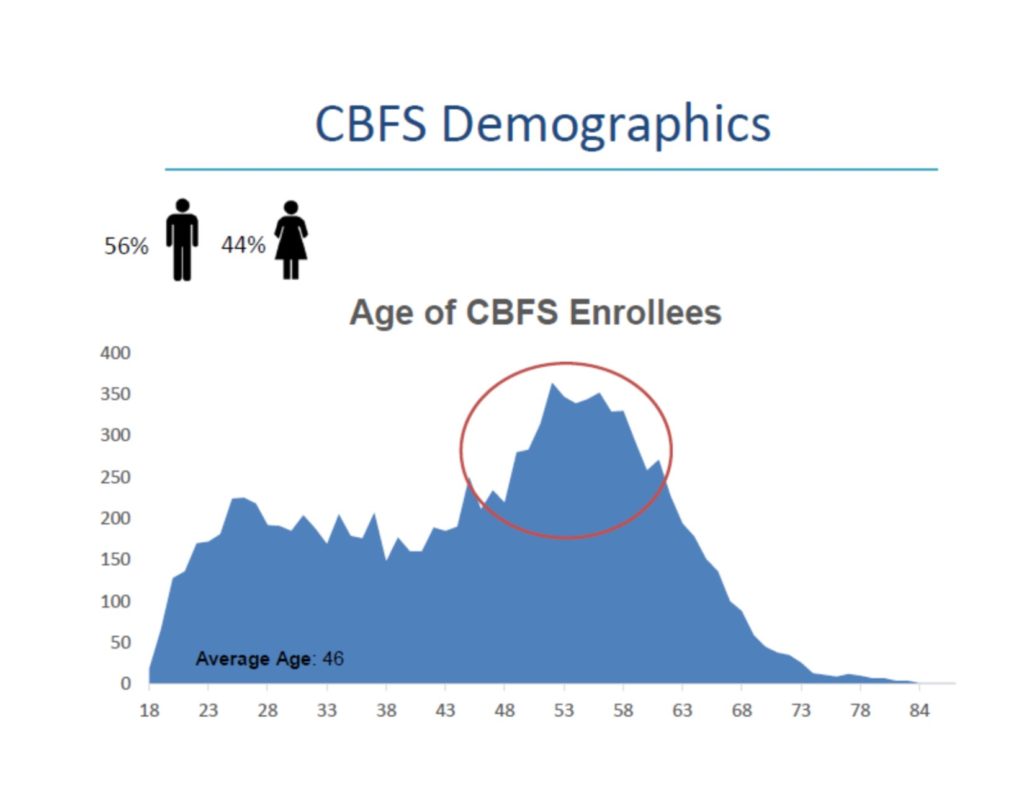 Truth be told, you’ve got one thing right: The system isn’t working very well. Check out this publicly available age demographic slide from the aforementioned DMH. It looks at ages of individuals in the local system’s ‘Community Based Flexible Support’ services (basically what serves as the state’s primary residential and outreach structure).

This slide tells an important story. Essentially, people are entering the system when they’re younger, getting stuck in that service (notice the pile up around 40), and then dying early (or transferring to nursing homes) as noted by the steep drop off that begins around about the late 50’s. (I promise you, they aren’t suddenly becoming ‘cured’ at that point.) Yes, they’re dying, but not typically in the manner you so salaciously describe in each and every blood-lusting Globe article that you write. Instead, they’re going quietly and unseen by the public eye. Written off to ‘natural causes’, even though we all know it shouldn’t be the ‘norm’ to die so young. But people the public is encouraged not to see as fully human going off and dying young in their sleep wouldn’t sell as many papers, now would it?

Now, to be clear, this story about those stuck in the Massachusetts system is not just about our lone state. It’s the story of the nation. It’s that pesky ‘we die an average of 25 years younger than other citizens’ fact rising up once again. And among the many reasons this is true are people like you who paternalistically believe you know what we ‘need’, and are willing to use scare tactics to shove it down our throats. At any cost.

This. This graphic. This is where your paternalistic approach has brought us so far. We deserve better.

A Globe Full of Broken Promises

I have to say I kind of feel like you Globe folks broke a promise. You were supposed to be done. Yet, not unlike that pesky cold so perpetually passed around my daughter’s preschool, you keep coming back. (In fairness, perhaps you regard me in much the same manner.)

Look, we get it. Subtlety is not your strong suit. The Globe’s Spotlight team is where nuance goes to die. You are dedicated Ezekiel Emanuel fans or something, all ‘bring back the asylum’ with maybe just a few quaint updates like Torrey-themed Pez dispensers full of Thorazine. DJ Jaffee and Susan Inman are your bestest friends. You want Involuntary Outpatient Commitment so bad you can taste it.  Except, ew. Risperdal doesn’t taste so good.

What I want to know, though, is what exactly will it take to get you to stop repeating the same old tired story in your relentless effort to prove the same old misguided point?

A Globe Full of Misinformation

Hey, what’s the difference between the National Enquirer and the Boston Globe?  About two bucks (and a healthy dose of transparency about the foolishness with which it’s been imbued). I’d choose the former any day at this point.

It’s mysterious to me, my dear Globe not-friends, why it isn’t more obvious to you the bind you’ve created for yourselves. That bind has been weaving its twisty tendrils a little bit further around your narrative with each story you write, but your ‘depleted state system’ piece plants said tendrils all up in your business oh so intimately.

Your infernal suggestion that the only answer is more of the same is belied by this very article that points to ‘the same’ not being functional at all. You describe how Boyd was not helped by a hospitalization, as if this were proof he unquestionably needed more. You detail the sad outcome of Shaheid Ware’s story of living in a group home (after he jumped out his bedroom window and was not found until the next morning), leaving us only with the vague impression that he got hurt because the place wasn’t… what? ‘Group homey’ enough?

You say, “It only takes a moment — one unsupervised decision — to bring about life-altering consequences.” Boy oh boy is that Globe scare tactic writing at its best, but sure, I guess you’re right. However, are we talking about toddlers or adults here? What dystopian universe have you cooked up where even hospitalized grownups have not a single moment to themselves?

A Globe Full of Air

You throw around words and phrases as if we all know precisely what you mean. But we don’t. In Ware’s situation, would the answer have been to install bars on the windows or a 24-hour watch while he slept? Have you ever spoken with people who’ve tried to live under such conditions? What precisely constitutes “proper supervision,” and who decides? What does the responsibility to keep people “safe” entail? A promise that nothing will ever go wrong?

While you so fervently speak about these unanswered questions as if they’re all answered and obvious, the rest of us live in the real world with the gray that you willfully ignore. While you champion psychiatric drugs as some sort of cure-all that helps any who should comply, many of us shake and twitch from permanent, psychotropically induced brain damage as we mourn our less lucky friends who’ve been lost to the iatrogenic effects of the system and its ‘treatments’, as well as those who have succumbed to suicide not for lack of drugging but for lack of hope within a framework that seeks to control rather than support. This is the system for which you seem to froth at the mouth, but your own words contradict its potential.

Something needs to change, yes. More funds are needed, true. But I’d like to suggest (again) that the Globe and its Spotlight team — who have neither tried living inside the walls of a hospital or residential program drugged to the gills, nor done your due diligence to understand what that may even be like — are not the ones to lead the charge. In fact, you’d do best to get out of the way.

Dear Globe, I want to offer one last suggestion. In August of 2017, the World Hearing Voices Congress will land not only in the United States for the first time ever, but practically on your doorstep at Boston University. If you’re even a little bit genuinely invested in improving the landscape of the mental health system in Massachusetts, this seems like a ‘must attend’ sort of event for you. Check it out. Try listening to us for once. What could you possibly stand to lose? (Hint: A hell of a lot less than us.)

What Can We Learn From the Asylum?