When I first started writing about asylums and mental health, I was a young teacher working in one of the last remaining residential treatment facilities in Massachusetts. I had no formal training in mental health — I had only my teaching certificate and a desperate need for a job — but I compensated by reading everything I could about treatment models and the evolution of mental healthcare. I also did specific research on the history of the program I was working in. Our school was but a small part of a larger behavioral health network that dated back to the early 1870’s. That network had historical ties to Northampton State Hospital to the north, often shuttling patients back and forth for treatment. Northampton was my introduction to Thomas Kirkbride and his asylums.

By the time I started my research into Kirkbrides, Danvers State Hospital was already well on its way to being demolished, but that didn’t stop me from driving the nearly two hours out to the North Shore of Massachusetts to see the remains of the Castle on the Hill. Nathaniel Bradlee’s hospital was and remains one of the best-known examples of Gothic asylum architecture and has become a fixture in modern pop culture.

Writing about Danvers was a rather daunting task. Despite having written about and lectured on the history of asylums for more than a decade I had never tackled the individual history of one particular institution. Though I knew that a great number of people held expansive collections of images and ephemera from Danvers, I wondered first how many would be willing to share their collections publicly, and then would others be willing to share their memories with me?

In writing about such a well-known asylum, I wanted, first and foremost, to strike a balance between the image of the snake pit that was most prevalent towards the end, and the years of history that preceded the breakdown of the state hospital system. When Danvers was first opened it was considered a model in the humanistic treatment of the insane, one to be studied by other hospitals. Most of the wards were open wards, meaning patients were rarely locked in, and the hospital’s main intent was to support patients in getting well and returning to their lives outside the hospital’s walls. Patients were provided private rooms with views of the manicured grounds, were well fed on fresh produce and meat that came from the hospital’s own farm and were given opportunities to work and contribute to the daily workings of the asylum.

Great emphasis was placed on occupational therapy, which in the late 19th and early 20th century consisted of both outdoor and indoor recreation. Baseball games, picnics, and organized exercise were common on the grounds while dances, moving picture shows, and concerts were held indoors. Both men and women worked with their hands weaving baskets, sewing, and making brooms and brushes. Though these tasks may seem rudimentary and demeaning today, they gave patients the opportunity to feel useful and connected in a place that might otherwise foster a great deal of isolation. 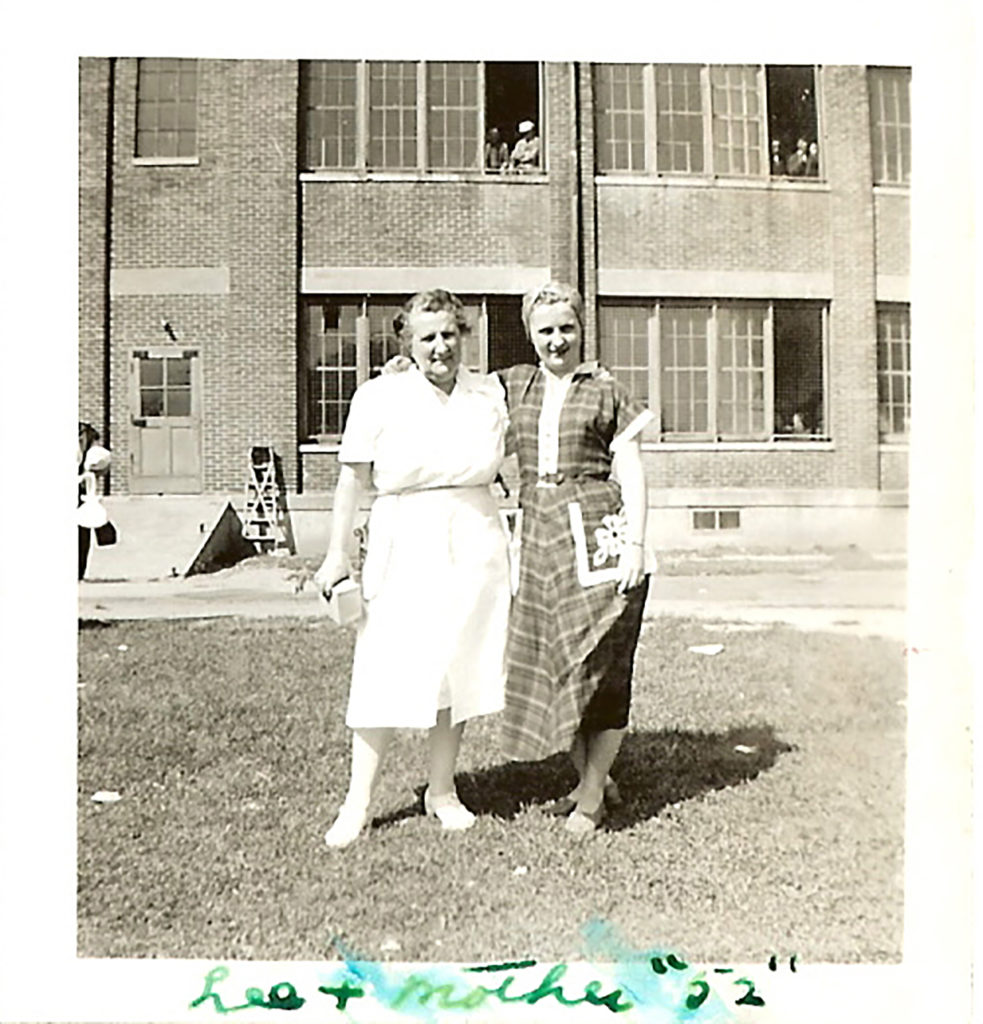 Danvers also emphasized connection with families and community. Early on, the hospital employed a social worker who was responsible for following patients after they returned to the community, ensuring that they had gainful employment as well as a place to live that was conducive to continued progress in their treatment. Patients and their families regarded a stay at Danvers as a positive, healing experience.

In collecting images for the book, I wanted to showcase first the physical beauty of Danvers State Insane Asylum, and thankfully there exists a rather large archive of early images including glass etchings and original architectural drawings. The sprawling Kirkbride measured in at 313,000 square feet and was nearly 2,000 feet in length. The interior was equally opulent with tin ceilings, decorative plaster walls, and chandeliers. Dahlias, the Victorian symbol for madness, were carved into the mantelpieces and adorned the exterior metal work. Interestingly, the asylum’s first annual report was quick to point out that all the interior walls were rounded at the corners so that patients wouldn’t bump into sharp edges. 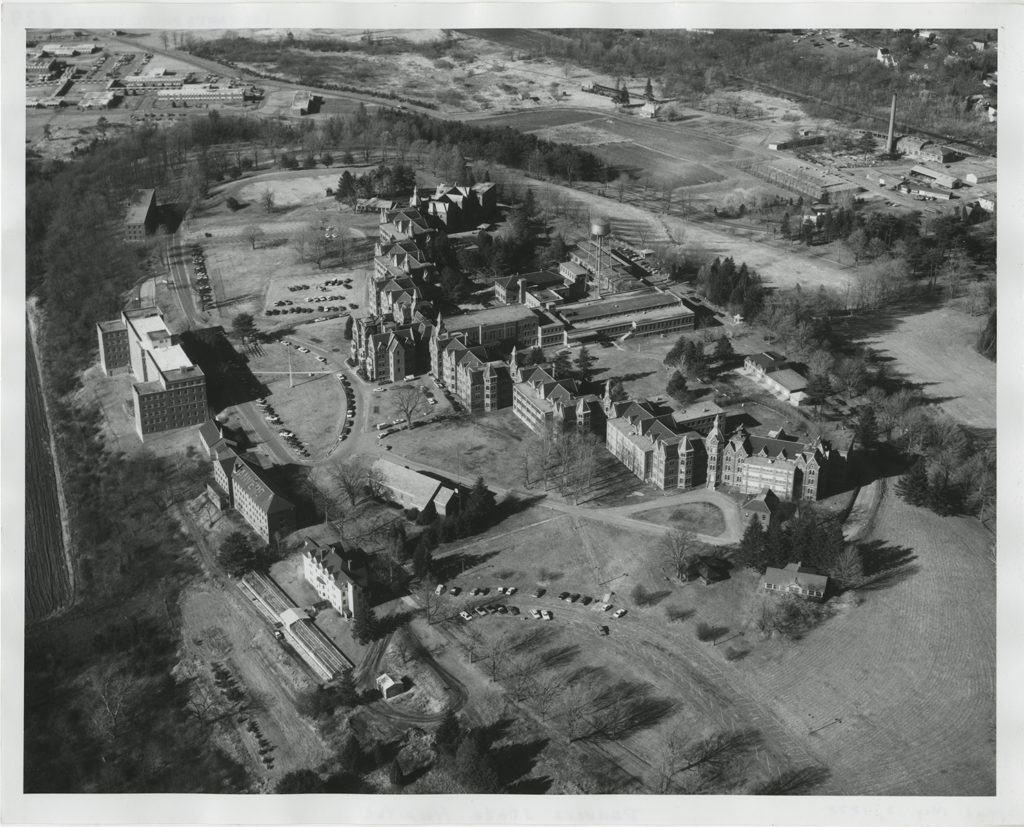 Interior images of the hospital were much harder to find. There are a few in existence, mostly in private collections, the others held by the archives at the Peabody Library (not pictured in the book). They are images of nurses caring for patients who are comfortably situated on clean, bright hospital wards, a far cry from what Danvers would eventually become.

For nearly a century, Danvers was a model asylum that hosted visitors from all over the world, including townspeople, family members, and friends. The formal gardens alone attracted roughly 12,000 visitors annually and those visitors often brought gifts for the patients such as books, magazines, and flowers for the wards. Danvers played host to visiting doctors and specialists, set up community outreach clinics, and established a nursing school. 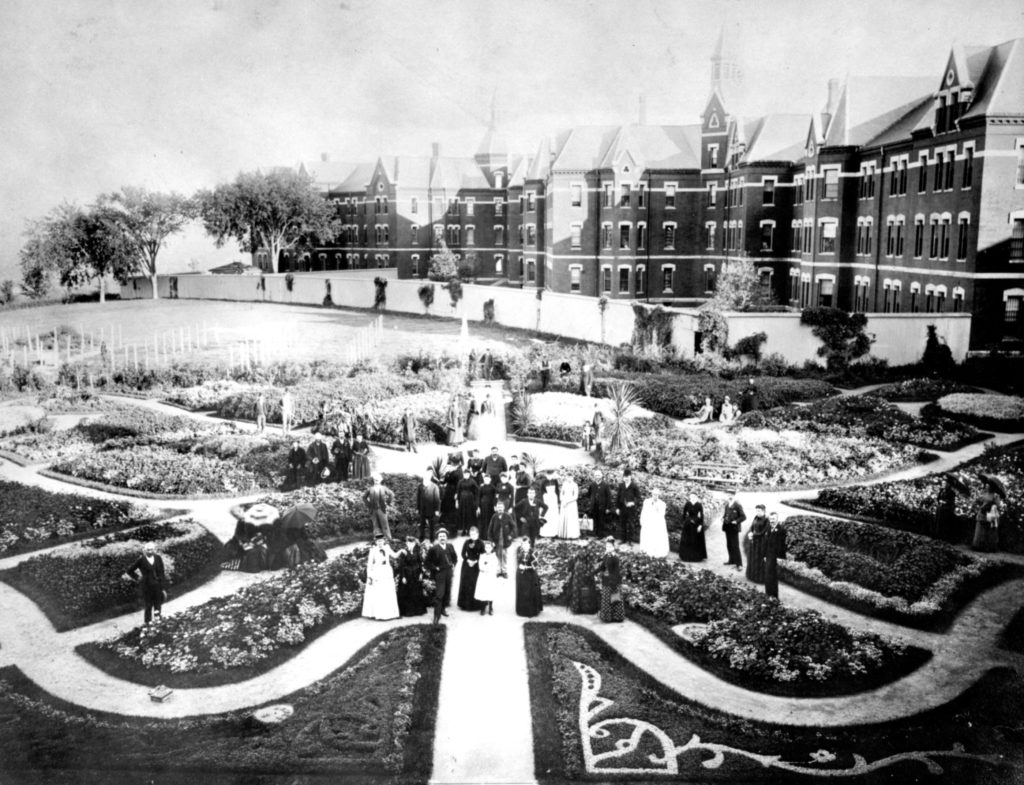 These were the halcyon days of the asylum. In spite of brief mentions of overcrowding in early annual reports, Danvers was able to treat patients in relative comfort and, in most cases, discharge them as recovered. The great shift in mental health treatment came with the invention of psychopharmaceuticals, the early “hypnotics.” Though drugs like chloral hydrate, morphine, and opium had been in use for much of the late 19th and early 20th centuries, the advent of modern antipsychotics such as chlorpromazine (Thorazine) “revolutionized” the care of the “mentally ill.”

With the help of this new breed of drug, hospitals were able to admit and manage a greater number of patients. The population at Danvers peaked at nearly 3,000 in the late 1960’s and into the early 1970’s. Patients were regularly treated using not only psychotropic medications but also electroshock therapy, hydrotherapy, and psychosurgery (also known as the prefrontal lobotomy). Asylum populations began to shift dramatically and hospitals moved away from the centralized model, choosing instead to unitize, working with the various regions to provide as much community support as possible.

Eventually reports began to surface of abuse and neglect within the hospital’s walls. Suspicious deaths, patient escapes, and violent assaults were all recorded (though not in as great a number as some might expect). By the late 1980’s the hospital’s main operations were moved from the Kirkbride to the more modern Bonner Building across the way. By the time the remaining hospital buildings were closed down for good in 1992, the buildings had begun to decay and by and large the public was happy that the state hospital was no more. The doors to Bradlee’s architectural masterpiece were locked and the Castle on the Hill was abandoned. The remaining and lasting impression of Danvers State Hospital was that it was a snake pit where the mentally ill went to languish and often die.

Soon after its closure, Danvers State Hospital would become the haunted house on the hill where kids dared one another to sneak in. It fell victim to vandals and arsonists, graffiti artists and scrappers. For many, it was an eyesore that couldn’t be demolished soon enough. For others, it was one of the few remaining bastions of an era of hope and enlightenment. Prior to the creation of the state hospital system, those deemed mentally ill were cared for at home, isolated from their community and feared by those around them. As families began to work outside the home and were not able to care for the mentally ill any longer, the responsibility fell to the states to find reasonable accommodations. The first institutions to care for the mentally ill were poorhouses and prisons. As wave after wave of immigrants reached the shores of the United States, the poorhouses overflowed and the number of insane poor skyrocketed. Many who caused problems in the poorhouses were transferred to jails or prisons but that was still nothing more than a temporary solution.

The first public asylum in the United States was built in Worcester in 1833 after noted social reformer Dorothea Dix discovered the mad chained in unheated prison cells alongside alcoholics and murderers. She was appalled by the conditions in which these individuals were kept and lobbied the state of Massachusetts for more humane treatment of the mentally ill. The American asylum system was born. In spite of its eventual decline, the system of care for the mentally ill in the United States began with the best of intentions: to care for the weakest among us in a thoughtful and humane way. Eventually, changes in legislation, the advent of the modern healthcare system, and a shift in human rights would bring the entire system to its knees in favor of community treatment.

As a photographer and historian, Danvers captured something in me that I often have a difficult time explaining. The architecture — and the knowledge that it played a part in the overall treatment model — sets the Kirkbride asylum apart from any other historical structure. As a writer and educator, I find that Danvers is an ideal vehicle for keeping conversation flowing about the treatment of mental illness as the specter of the asylum touches such a varied group of individuals, from former staff and patients to urban explorers and ghost hunters. Danvers lives on in a very real way, and not just because the façade still stands. It bears a lasting legacy that I hope is captured in the book.

What Can We Learn From the Asylum?