“The expanding use of fast-acting NMDA receptor antagonists for psychiatric disorders is a significant risk to the public.”

That’s the conclusion drawn by researchers in a new multidisciplinary review in the journal Pharmacotherapy. They evaluated 60 years of studies on ketamine (and its newer variety, esketamine) for depression treatment, and write that their evidence serves to “raise substantial questions about both safety and effectiveness of ketamine and esketamine for psychiatric disorders.” 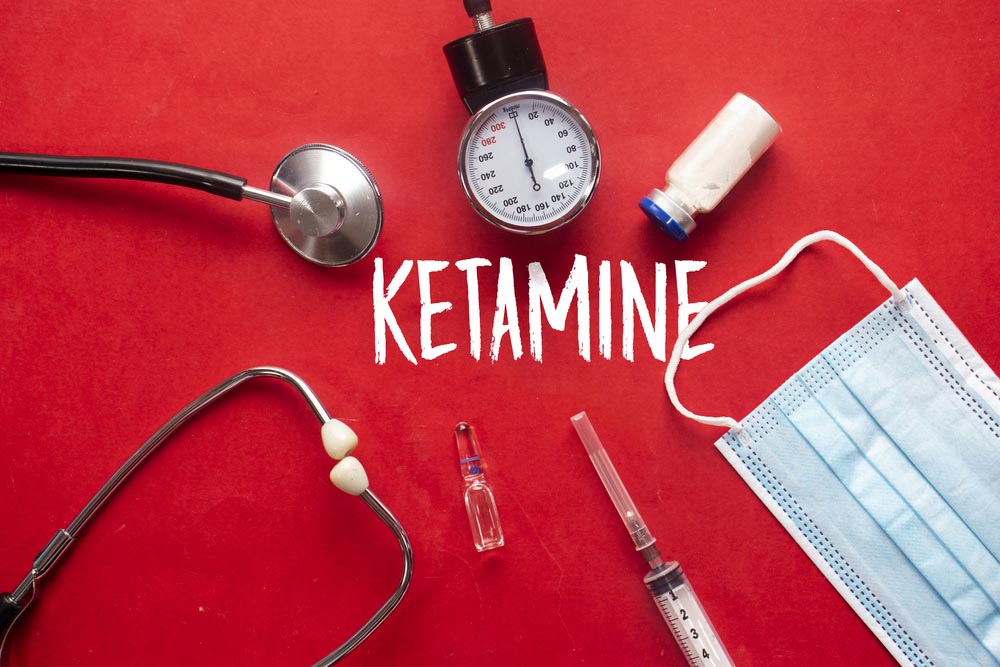 Two of the challenges of ketamine research are a) ensuring that clinical trials are appropriately blinded, and b) differentiating ketamine’s supposed rapid antidepressant effect from the euphoric high that recreational drug users experience. The table below, compiled from data in a 2020 study by the current authors, demonstrates the common consciousness-altering effects of ketamine infusions that patients report experiencing during treatment for depression: 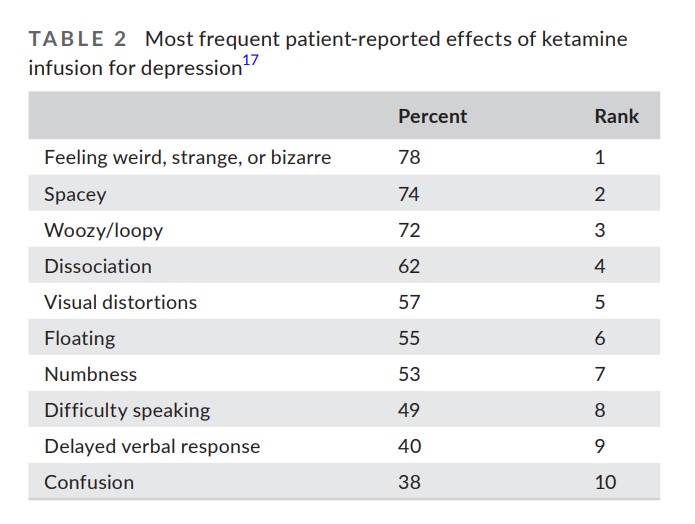 The idea that 78% of patients could experience “feeling weird, strange, or bizarre” and not guess that they are in the ketamine group—rather than on placebo—is unlikely.

Additionally, the researchers report that more than a quarter (27%) of patients experience “euphoria”—a drug high that drives recreational use. Does the drug have a rapid antidepressant effect on people with depression, or are its users experiencing the same brief high as recreational users?

According to the researchers, ketamine’s status as a potential breakthrough depression treatment came in 2000, when a small study out of Yale found that ketamine infusions led to a large average decline in depression within 72 hours. However, this study was incredibly small—including only seven patients.

Four systematic reviews of the ketamine efficacy research were published in 2014-2015. The researchers note that while these reviews found large and rapid antidepressant effects for ketamine, the studies they included were all at high risk of bias, did not use a true blinded comparator group, used very small sample sizes (ranging from 4 to 47 patients), and included only extremely short-term data.

“The trials with one exception featured a single infusion of ketamine, and none measured the effect later than 14 days, leaving duration of benefit uncertain but openly questioned in the report texts. With one exception discussed below, none of the trials featured a design with blinded active-drug controls. This was especially relevant given a drug that within 40 min of administration induced an altered state of consciousness that would be immediately evident to the patient and probably the investigator. The altered state of consciousness would compromise blinding in the four clinical trials with a crossover design.”

So, what of the one trial that was an exception to this rule?

This study was the largest and included an active placebo—a benzodiazepine, intended to mimic some of the consciousness-altering effects of ketamine. This study found a large, rapid antidepressant effect for ketamine in treatment-resistant depression (people who had not responded to at least three previous antidepressant drugs).

However, although it was the largest study of ketamine, the trial only included 47 people—small by most standards. Moreover, it was led by authors with significant conflicts of interest; two of the authors—and one of the two medical centers used for the study—held patents on ketamine (which would only be lucrative if the FDA approved the drug based on their study). Four authors were consultants for pharmaceutical companies.

“The promising results seen in the small, single-infusion, single-center trials of racemic ketamine were generally not replicated in the larger, multi-site trials of esketamine nasal spray,” the researchers write. “The esketamine trials were also subject to FDA site inspections, data integrity checks, and other forms of independent scrutiny.”

Esketamine was approved by the FDA for use in treatment-resistant depression in a controversial decision, according to the researchers. Indeed, Erick Turner, a member of the advisory board that recommended approving the drug, wrote a scathing editorial about the decision in Lancet Psychiatry, calling it “a historic break from precedent.” Other researchers called it “flimsy evidence.”

Esketamine failed to beat placebo in five of its six clinical trials. Researchers referred to it as approval of an ineffective drug with known harms and called it “repeating the mistakes of the past.” And safety concerns were emphasized by other researchers.

Indeed, according to Moore and his co-authors, although the FDA granted “breakthrough status” to esketamine because of its rapid antidepressant effects in a phase 2 trial, none of the larger, more strict phase 3 trials met the FDA’s criteria for such an effect.

Esketemine’s efficacy for reducing suicide risk was also tested in three clinical trials. It didn’t reduce suicidal ideation in any of them:

The researchers write: “The trials to document the expected benefits of a rapid reduction in suicidality were an unambiguous failure.”

Despite this, the FDA granted Janssen an expanded indication, allowing esketamine to be used for treating suicidality—apparently based on those failed trials, according to Moore and his co-authors.

“Although an FDA-approved indication normally means ‘substantial evidence’ of benefit,” the researchers write, “the indication contained the unusual qualifier, ‘The effectiveness of SPRAVATO in preventing suicide or reducing suicidal ideation or behavior has not been demonstrated.’”

Nor are ketamine and esketamine as safe as advertised. The researchers write that studies in animals since 1989 have consistently found neurotoxic effects of the drugs, and studies in human recreational users found reduced cortical thickness and damaged cognitive performance. The FDA accepted three toxicology studies supposedly proving the safety of the drug, but all three involved only a single dose delivered to rats.

There is very little official data about the long-term use of the drugs, since most trials are limited to extremely short term (two weeks or less) outcomes. The FDA accepted one open label (unblinded), 1-year study of 100 patients who had already responded well to ketamine as evidence of its safety.

According to the researchers, “Almost any drug intervention can be made to appear safe or beneficial if unblinded and limited to a small group of patients who, from the onset, had already responded well.”

In a study of the first four patients to receive esketamine treatments at one center, one ended up on antihypertensive drugs for life to manage the detrimental effect of esketamine on blood pressure, while another attempted suicide one hour after taking the drug. None of the patients were able to safely discontinue esketamine, with thoughts of suicide common after beginning to withdraw the drug.

According to a review of the esketamine studies, about 20% of people will experience bladder problems after taking the drug.

Moreover, a case study in the American Journal of Psychiatry demonstrated the frightening consequences of ketamine tolerance and withdrawal—as does another case study involving a patient prescribed ketamine who, after becoming dependent on the drug, turned to alcohol abuse and died by suicide.

In summary, the researchers write:

“Considering the scientific studies reviewed in this assessment, we find that neither ketamine nor esketamine has been shown to be safe for extended clinical use to treat depression. At subanesthetic doses, ketamine is a well-documented drug of addiction and abuse.”

The Spravato Controversy: A Row Over the Drug’s Efficacy Compels a Reassessment of its Approval