Psychotherapy is just as good as drugs for depression in the short term and better than drugs over the long term, according to the largest meta-analysis yet conducted. Moreover, combining drugs and therapy did not lead to better outcomes than therapy alone.

“CBT appears to be as effective as pharmacotherapies at the short term, but more effective at the longer term. Combined treatment appears to be superior to pharmacotherapy alone but not to CBT alone. The efficacy of CBT in depression is documented across different delivery formats, ages, target groups, and settings,” the researchers write.

Pim Cuijpers led the study at Vrije Universiteit Amsterdam, the Netherlands. It was a meta-analysis of 409 randomized controlled trials of cognitive-behavioral therapy (CBT) for depression, including more than 52,000 participants—the largest meta-analysis of a specific therapy ever conducted, according to the researchers. The included trials compared CBT to placebo, waitlist, treatment as usual, antidepressant drugs, other psychotherapies, and combined treatment. 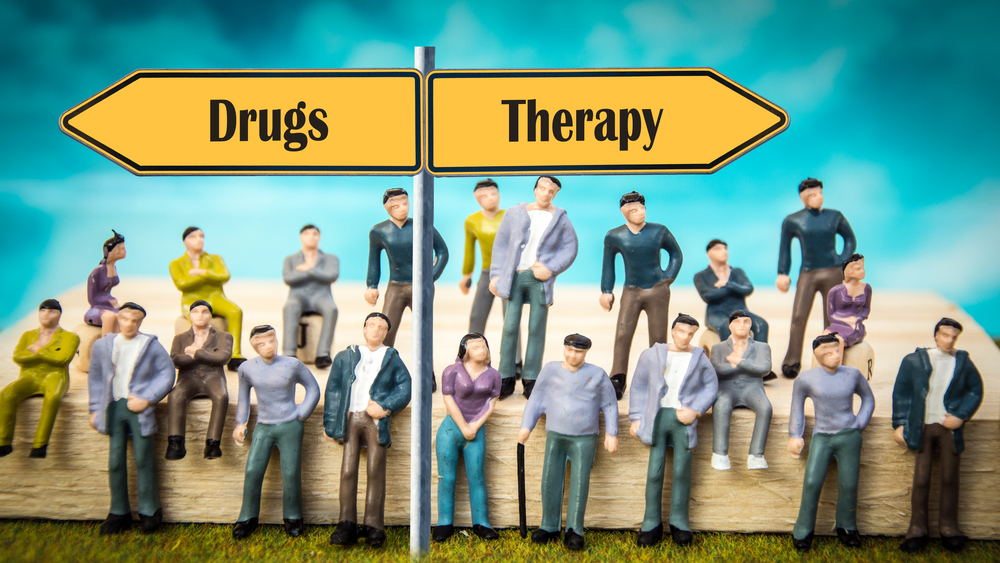 CBT demonstrated a large effect size compared to control conditions, such as placebo or waitlist (0.79). Because publication bias has been found to inflate the efficacy of depression treatments, the researchers accounted for this in their model. Once they accounted for publication bias and studies at higher risk of other types of bias (such as unblinding), the effect size for CBT remained moderate (0.47).

At the 24-month timeframe, the effect was no longer significant (effect size 0.22), but the researchers suggest taking this with a grain of salt since only eight studies followed up at that timeframe.

Regarding response rate, about 42% of people responded to CBT, compared with 19% in control conditions. For remission, 36% of people in therapy no longer met the criteria for depression, compared with 15% in control groups. The number needed to treat for CBT was 3.6 (that is, 3.6 people would need to be treated for one person to have remission).

However, these results are about the same as those for drugs and combined drugs and therapy.

When CBT was compared to drug treatment, the researchers found no difference in the short term. Antidepressants and CBT appeared equally effective. By the 6- to 12-month endpoint, though, CBT did better than antidepressant drugs:

“The effects of CBT are comparable to those of pharmacotherapies at the short term, but CBT is significantly more effective at 6 to 12 months.”

But what about the oft-cited adage that combining drugs and psychotherapy is better than either one alone? Not so, write the researchers. While combined treatment was slightly better than antidepressants alone, CBT alone does the job just as well:

“Combined treatment is not more effective than CBT alone at either time point.”

Was CBT—generally regarded as the “gold-standard” psychotherapy treatment—actually better than other types of therapy? It doesn’t appear so. Instead, the researchers found that the various forms of psychotherapy were all equally effective:

“In the subgroup analyses in which we examined the different psychotherapies that were compared with CBT, we found no indication that one of these therapies was more or less effective than CBT.”

The most common other therapies tested were supportive therapy, IPT (interpersonal therapy), and behavioral activation. However, 46 studies were classified as “other” (therapies that did not fit one of the previously mentioned types).

Different formats of CBT were also included, such as group CBT and guided self-help. These were just as effective as individual CBT, consistent with previous research. The researchers also found that unguided self-help was effective, although at a slightly smaller effect size (0.45).

Although this study finds psychotherapy and antidepressant drugs to be about the same level of effectiveness (in the short-term, at least), there may be some reasons to choose one over the other. The advantage of drugs is that they are easy—it’s very simple to get prescribed the drugs, and you just have to remember to take them. Psychotherapy requires more time and effort and also comes with an availability gap.

However, psychotherapy doesn’t have the harmful effects of antidepressant drugs, which include sexual dysfunction for up to 88% of those taking them, weight gain and metabolic problems, emotional numbing, and more. Likewise, withdrawal is common after someone stops taking antidepressants and can be severe and last for years. Withdrawal effects of the drugs can include anxiety, depression, brain zaps, fatigue, and even stroke-like symptoms.

Moreover, other researchers have repeatedly found that those taking the drugs have worse outcomes in the long term, even after controlling for the baseline level of depression severity.