As part of its I GOT BETTER campaign to challenge hopelessness in mental health care, MindFreedom International conducted a two-part Hope in Mental Health Care Survey from June to October of this year. The survey was designed to gather answers to these three questions:

1. How prevalent are messages of hopelessness in mental health care?
2. What are the sources and contents of these messages?
3. What is the veracity of these messages? In other words, do hopeless prognoses and statements about recovery, medication use, etc. generally prove true or false?

Well over 1000 individuals participated in the survey, contributing their experience, wisdom, and opinions to a growing body of knowledge about recovery from mental and emotional distress. In this and forthcoming blogs, we’ll be sharing the major findings that emerged from our analysis of the survey data.

(You can download the final survey report that outlines survey methods, characteristics of the survey sample, and all findings here.)

The mental health system itself is the most common source of messages of hopelessness.

Respondents to part two of the survey who had received a psychiatric diagnosis (n=390) overwhelmingly pointed towards the mental health system as the source of messages of hopelessness: 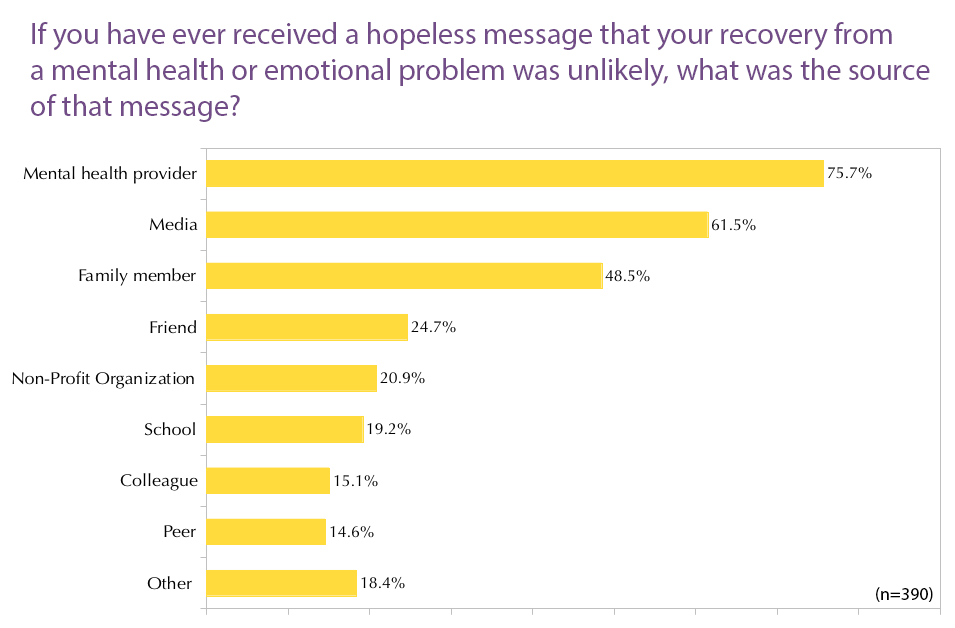 The frequency of hopeless messages was even greater for individuals with diagnoses of schizophrenia and bipolar disorder.

Were these messages of hopelessness true?

Looking again at respondents with diagnoses of schizophrenia and bipolar disorder (described by the American Psychiatric Association as “serious mental illnesses”* and frequently assigned an extremely negative prognosis in the medical literature), we see that often these messages of hopelessness were unwarranted.

Almost 2/3 of respondents with these diagnoses who were once told recovery is impossible described themselves as “recovered.”

The same trend continues across the board, for every diagnosis. A significant percentage of individuals once told by mental health providers that recovery is impossible describe themselves as “recovered” or “fully recovered”: 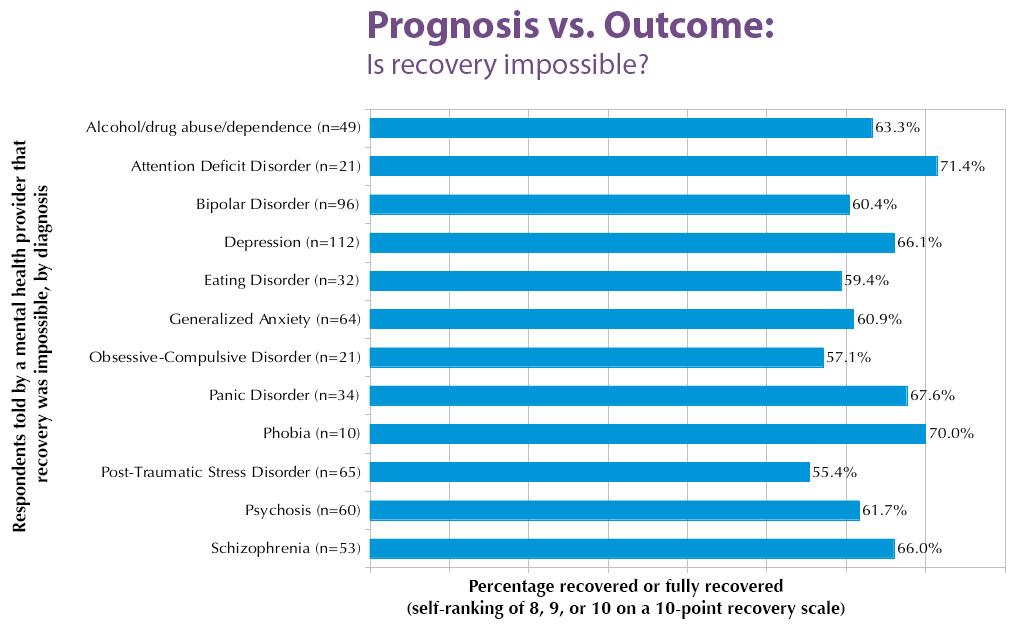 This vast disconnect between prognosis (as predicted by mental health providers) and actual outcome (as reported by psychiatric survivors) forces us to ask the question: Why send messages of hopelessness when they are so often untrue?

MindFreedom International’s I GOT BETTER campaign is about sending a different kind of message, one of hope and human possibility.

You can see some of those possibilities in our collection of videoed stories of triumph over psychiatric adversity (see these written stories, also). And if you have a story to share, we encourage you to do so. We want to compile a body of knowledge to counter the narrative of hopelessness, to show that there are diverse ways to achieve balance after mental or emotional distress.

There are many ways to mental and emotional wellness.  What’s yours?