In a recent dream, I was pulled to the doors of a hospital emergency room. I didn’t move my feet; I was compelled by some other force until I was standing directly in front of the large glass doors. But I didn’t go inside. I just stood and thought, feeling cold and exposed, with a deep dread in the pit of my stomach.

Then I made a new decision, and for the first time I started backing away, this time using my own feet and my own effort. I cautiously backed up the same way you would back away from the barrel of a gun. As I got further away, the fear in my stomach lifted and was replaced with a deep contentment and a feeling of safety. Finally I was standing on a hill far from the doors, looking at the glass entrance and the yellow glow inside, knowing that I’d rather be out here in the darkness alone than face what is inside that hospital.

This year is the first time I have made a choice to back away from the mental health system. I never felt I had a choice before. I felt compelled to seek help from a system that had bullied me for years. I was conditioned to run back to them to protect me from the monster I carried on my back.

When I turned to face this monster, I learned that it isn’t a monster at all. In fact, some of the most creative and authentic pieces of me are housed in this so-called monster that they have named Bipolar.

I was first hospitalized at age sixteen after the death of my grandmother. She was a genius with a photographic memory and she understood me. When I sat with her I didn’t feel like a freak or a misfit. I was just me, and she made space for all my quirks. Once she was gone, my safe space was gone and I never fully recovered. Looking back now I believe I was hospitalized for grief, but labeled with disorder.

My stay in hospital at age sixteen included being told that they had tested my IQ and I was smart, therefore making it all up. I was given ECT as a treatment for making it all up, and then was discharged with ten words laced heavily with contempt. These words still echo in my head: “Get her out of here, she will never get well.” I was discharged without the meds I had been on in the hospital, and I went through withdrawal at home with no idea what withdrawal was. I now understand that the nightmare I went through was from the sudden discontinuation of medications such as Ativan and Prozac.

Twenty years later, I finally realized that death was better than here, but I didn’t want to die. ‘Here’ was medication-induced Lupus. ‘Here’ was a medication-induced tic. ‘Here’ was my life unraveling despite following all the orders and taking all the medications. I still had regular hospital stays, and when I did I would be blamed outright. “We all know this is what you do. You mess with your meds!” my therapist told me after my last hospital stay. In her mind the answer was clear and simple, but she was building a puzzle without having all the pieces. The doctor told me that the rash I had all over my body was from anxiety or the sun, not the new medication. The fact that I was concerned about it was a sign of my obsessions.

I couldn’t win. They were fighting dirty. A Bipolar 1 diagnosis made me an easy target to blame. I couldn’t convince them that I was compliant even by being compliant, and this compliance almost killed me. I couldn’t prove that I had insight because they had already made their minds up. I was in a very dangerous position.

The most dangerous weapon that has been used against me is this idea that I am incapable of insight because of my diagnosis. There will be occasions when my insight is faulty, like there is with any person, but this is the exception and not an everyday occurrence. I’m tired of rules being written for me based on exceptions to the rule.

Learning over a lifetime in the system that I couldn’t trust my own insight did more damage to my intellect and ability than this illness ever has. I stopped trying. I was terrified of me, but I was even more afraid of what the doctors could do to me. Even portions of my experience that are very human were scrutinized and then pathologized. I was no longer allowed to just grieve or vent. I felt envious of the people around me who did not have a diagnosis. I watched them scream at traffic or stomp their feet or cry, all without fear of lock up.

I imposed on myself an emotional prison. I thought that if I kept myself locked up mentally, they wouldn’t lock me up physically. When I asked for a referral to a new psychiatrist, my doctor was offended and I was blamed again. When did my ability to decide if a relationship is working or not shut down? I stayed with the same doctor for fifteen years.

The sicker my medication made me, the harder the doctors pushed back. They could only see my psychiatric diagnosis despite me having a very visible physical reaction to the medications I had been taking.

I believe now that fifteen years is more than a fair try. Fifteen years of getting treatment without returning to function is actually insanity. I should have given up after year two. Instead of trusting my intuition and insight, I pushed it down and down… until it finally fought its way back to the surface. I could no longer ignore the obvious. My body was screaming the truth at me and finally I had no choice but to listen.

What scared me the most in my quest to gain distance from psychiatry was the anger and resistance I encountered from my team. Mental Health closed my file. The medical doctor threatened to give the medication by injection. Community Treatment Order was brought up on three occasions by three different team members and I panicked. I was thinking about how when an ordinary-appearing family man kills his family, no one jumps onto the idea that we need legislation protecting the community from all ordinary-appearing family men. What if the crimes committed by people with mental illness are not connected to the illness at all? Maybe it is poverty or anger or just one of the sad aspects of being human. Maybe blaming mental illness is a red herring.

When I was finally off all maintenance medication, I went in to tell the GP how well I was doing… and was told I was mistaken. My wellness was impossible. I had been diagnosed based on my own words – how come my words only count when I have a symptom to share? Any accounts of my recovery and the joy that is tied to it were disregarded. At every appointment, I was reminded of my diagnosis and why I can’t be functional. Waiting to die was the best they had to offer.

If I am afraid of what the imbalance of power can do to me it is because I have lived it, only I was on the side without any power.

But this year is different. I’ve taken back my power. It has been a journey of several years of gently weaning my treatment team a little at a time, in order to prevent a tantrum that could do harm to me. This year I finished the weaning process and am now a free agent. I had believed that I would have to do this alone, and was even considering going into hiding, but there are supports and advocates out there. I just wasn’t looking in the right places. I don’t want to hide because if I hide, then my experience can’t help others. If someone had told me this story when I was sixteen, things might have been different.

Now I am working on becoming friends with my quirks again. Self-compassion has been a more effective treatment than the medication straitjacket ever accomplished. I am as guilty as the medical system, though, because when they told me how dangerous these parts of me were, I jumped on board and began a twenty-year fight against myself. After all, that ‘monster’ was me.

I will never be able to make up for the abuse I inflicted upon myself in the name of mental health. But this year I realized how cruel I have been. This year I apologized to myself and began grieving everything I have lost.

Now my life is reconfigured to include helpers, advocates and friends who have my best interests at heart and who see potential in me. Best of all, I am now relearning to trust my insight and become one of my own supports.

I am still backing away from the psychiatric system. I am not yet at the safety of the hill I saw in my dream, but I’m getting closer, and with each step I feel happier and more secure. I’m sure that when I get to the hill and look around, I will see that I’m not outside in the dark and all alone. There is a crowd of us, and the sun is coming up. 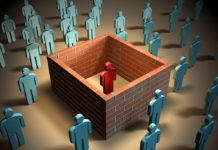