Approximately two years ago, I penned an article contending that the tide is beginning to turn against psychiatry, listing as examples of telling indicators thereof the ever-growing critiques of DSM-5, the abundance of devastating exposés exposing the systematic “cooking” of psychiatric drug trials, and the emergence of a special issue of Acta Scandinavica precisely on what has been euphemistically termed psychiatry’s “image problem.” Likewise an indicator — but on a far, far more modest scale — is the huge success of an educational event last week. This minor example is the focus of this article.

Exactly what was the event? A two-hour public library talk complete with Q&A that occurred on December 6. What makes this event a tiny indicator? Besides the fact that this was a totally antipsychiatry talk, and besides the fact that never before had a public library sought out an antipsychiatry scholar/activist to deliver a speech of this ilk, what is significant here is the enormity of the turnout, together with the highly positive reception.

So how did this event materialize? And what exactly happened?

The brainchild of Toronto librarian Masha Darkor, the event was kickstarted almost a year ago when Masha took the unprecedented move of turning up at the book launch of a new antipsychiatry book of mine called Psychiatry and the Business of Madness, with the intent of persuading me to give a talk on the subject in the Beeton Auditorium of the Toronto Reference Library. For those unfamiliar with this library, it is by far the largest public library in Toronto, located in the centre of the city. The significance of this invitation is that for the first time in history an antipsychiatry address would be happening in a totally mainstream venue. Discussions took place about accommodation needs, and in the fullness of time the date of December 6, 2016 was agreed on.

As the big day came, the prognosis for even a fair-to-middling turnout was poor, for it was raining mercilessly. Nonetheless, against all odds, in unprecedented numbers, people turned up; most from Toronto, some schlepping in this highly inclement weather all the way from neighbouring cities like Milton. According to the estimate provided by Toronto library official Richard MacCallum, the turnout was “212 people” — a figure never remotely garnered before by an antipsychiatry talk. Hailing the event as a total success in his correspondence the following day, MacCallum correctly pointed out that not only was the auditorium packed, just outside all three exits stood folk listening intently, despite not being able to get in or even sit down.

Even a year ago, who would have thought such interest and determination possible?

If the number of people present and the staying power were impressive, so was the response. We began with a minute of silence in commemoration of the women killed in the Montreal Massacre, for this was indeed the anniversary of that misogynous horror. Later in the talk, I problematized the standard psychiatric claim that the various school shootings in general would not have happened if the perpetrators had been on psychiatric drugs. In response, I pointed out that the vast majority of school shooters in North America had in fact been on a therapeutic dose of psychiatric drugs at the time of the shooting (see Burstow, 2015).  The point and the horrific irony here is that these drugs, while being one of the causal factors, are being erroneously configured by psychiatry as the solution.

As the talk proceeded, with the problematizing of the concept of mental illness, the exploration of the quality of psychiatric research, and the etching out of different and more communal and respectful approaches to individual and social problems, not a soul in the auditorium budged.  Come question period, correspondingly, it was clear that people had been listening intently. Moreover, it was clear that the audience was not just comprised of what might be called “the usual suspects,” but was a highly diverse group that hailed from all walks of life.  Some were obviously students, some psychiatric survivors, some family members of survivors, some academics, some former police officers, some taxi drivers, some social service providers, some activists (including from feminist and antiracist movements), and some health professionals (e.g., medical doctors, social workers, psychologists, naturopaths).

What likewise suggested to me that an appreciable shift had occurred was that the questions asked were both transparently informed and “onside.”  “Can you tell me what to do when someone is struggling with addictions?” asked one person. “What is the number one thing we should be doing as activists?” asked another. “Even if they knew nothing about how compromised the research is that underpins the treatments, how can doctors bring themselves to just impose drugs on their patients?” poignantly exclaimed still another, peering about with incredulity.

Hands of people eager to ask questions kept rising, and we could have easily continued with the Q&A for another couple of hours. Adding to the triumph of the day, when the event was ostensibly over, people lined up in large numbers to connect with me; some professionals who wanted to discuss more about what concretely could be done, some survivors eager to relay their story.

What adds further to my sense of the significance of the event is that I received an avalanche of enthusiastic emails from attendees the following day. Of these, one story especially touched my heart.

Despite the incessant rain, the woman drove all the way from Milton. Why? Because, according to her, she had the uncanny feeling that coming to this lecture would be a life-changing event. She added that as she headed back home that evening she indeed saw proof that it was. Irrespective of whether or not she is correct in her evaluation, what happened? As she departed the auditorium, she attempted to buy one of the antipsychiatry books being sold. Unfortunately, the machine refused her credit card. Prior to attending this lecture, she informed me, she would have responded to an outcome like this by becoming instantly downcast. Instead, inspired with a new confidence and hope, she laughed off what had happened as a minor inconvenience and headed home.

Now I am well aware that folk who are totally or even partially positive about psychiatry will to various degrees be unhappy, perhaps even livid, about what happened on that rainy evening; may well see the enormity of the interest and enthusiasm sparked as dangerous, and several will immediately jump to critiquing both antipsychiatry and its advocates — which is surely their right. Such a response inevitably and understandably transpires when a central paradigm of any sort is under attack, though especially when: a) people are convinced (indeed, such is hegemony that they have been taught to be convinced) that the well being of the vulnerable and society in general is dependent on said paradigm and the practices associated with it, and b) when they see a paradigm in which they and/or their loved ones have vested their trust beginning to crumble.

To be clear, I am in no way questioning the experiences of such folk, for I totally respect that people are experts on their own experience. I am questioning only the interpretation of that experience, as framed by psychiatry. And to be clear, of course, I feel for the fear and the pain involved. At the same time, like the larger indicators touched on at the beginning of this article, the avid interest displayed signals to me something very, very different — that ever more people, including professionals, are at long last seeing through the psychiatric pretense, are tired of false claims, are disgusted by the vested interests at play, recognize the inherent human rights violations and are hungering for a radically different, more human, more communal, and more egalitarian approach to human distress and human conflict.

The hunger that evening was visible, was palpable, with a wholesale rejection of psychiatry unapologetically asserting itself. Not a single person, for instance, asked if there just might be chemical imbalances after all or indeed posed any objection to the general direction being articulated.

Now I am well aware that strenuous objections and deeply felt outrage will continue to emerge at future venues. For again, such is psychiatric hegemony. The point is, nonetheless: that evening “happened.” That is, what would have once seemed impossible “happened.”

And herein, in however minor a way, let me suggest, we witness “the turning of the tide.”

One final thought that not only antipsychiatry activists but also activists in other movements might want to take away with them: As an activist, you work for a long, long time seeing no signs of change, and perhaps you are tempted to throw your hands up in despair. However, very, very often something utterly profound is shifting beneath the surface. In this regard, as peace activist Ursula Franklin always reminded us, change comes slowly, with work beneath the surface first preparing the way. To quote Ursula in reference to her earthworm theory of social activism: “From earthworms we learn that before anything grows, there has to be prepared soil.”

For the longest while you see no change at all as you doggedly go about your work of writing briefs, penning blogs, gathering statistics, and mounting demos, including ones that not a single media covers. That is, like the earthworm, you do the work of preparing the ground, albeit seemingly to no avail. Then as if from out of nowhere, you start to see evidence that incredible changes have been happening all along.

Such is precisely what those of us who squeezed into that auditorium had the privilege of witnessing that evening. And such is the ecstasy of it all. 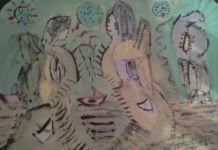 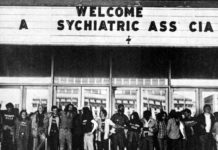