The neuroleptic tranquilizers commonly referred to as “antipsychotics” are often used as a first-line treatment for those deemed “at risk for psychosis,” as treatment providers attempt to stave off the worsening of psychotic symptoms associated with schizophrenia. However, there is little evidence that this approach is effective, and the drugs are associated with many harmful effects.

In a new study, published in the Australian & New Zealand Journal of Psychiatry, researchers wanted to investigate whether antipsychotics might prevent “conversion to psychosis” in people who were identified as being at “clinical high risk (CHR) of psychosis.”

The researchers found that antipsychotics were consistently associated with worse outcomes—higher rates of “conversion to psychosis” were found in those who took the drugs, those who had multiple prescriptions, and those who took a higher dose of the drugs.

“Administration of antipsychotics to CHR patients is potentially harmful with no preventive benefits. We do not recommend antipsychotic treatment for CHR individuals, which is practiced widely in China, and strongly advise caution if these drugs are used.” 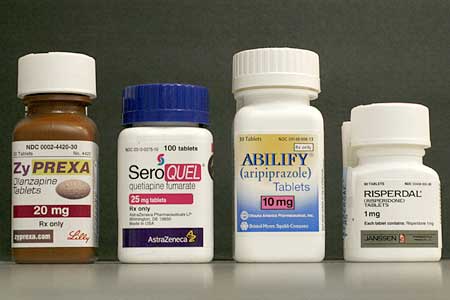 The research was a part of the SHARP (ShangHai At Risk for Psychosis) trial. Five hundred seventeen participants between the ages of 13 and 45 were identified as “CHR” based on a clinician-administered measure, the Structured Interview for Prodromal Syndromes (SIPS). Four hundred fifty of the participants completed a 2- or 3-year follow-up.

This was not a randomized, controlled trial, but rather a real-life trial—designed to see how people fared in actual practice, rather than in a controlled lab setting.

The researchers argue that clinicians often discount the results of RCTs with the excuse that real-world situations are more complex, and clinical judgment cannot be tied to controlled trials. Therefore, this real-world assessment was designed to showcase actual results for clinicians to take into their practice.

For those with mild CHR, antipsychotic treatment was associated with worse outcomes—higher rates of “conversion to psychosis.”

For those with more severe CHR, antipsychotic treatment still resulted in no improvement. Instead, the rates of “conversion to psychosis” were the same on average whether someone took an antipsychotic or not.

Among those that did take antipsychotics, those on a single drug and those taking a lower dose were less likely to “convert to psychosis” than those prescribed multiple drugs and higher doses.

Many different antipsychotics were used, including aripiprazole, olanzapine, risperidone, amisulpride, and quetiapine. The researchers write that their “results did not favor any specific type of antipsychotics.”

In summary, the researchers write,

“When the baseline severity of symptoms was considered, no significant difference was detected in the severe CHR group in terms of conversion rate, but even worse, those in the mild CHR group who been treated with antipsychotics were at an increased risk for psychosis.”

Of note, none of the participants were provided with psychotherapy—so this was a comparison of people given antipsychotics to people receiving no treatment.

The researchers write that people receiving no treatment may do better due to living normal lives without the stigma of medicalized distress and the adverse effects of neuroleptic tranquilizers:

“It is noteworthy that those patients not treated with antipsychotics may have functionally benefited from less stigmatized stress, adverse effect, and living in a more ‘normal’ and relaxed environment.”

Even in full-fledged first-episode psychosis, researchers have found that CBT without antipsychotics is just as effective—adding the drugs provided no additional improvement.

The evidence against the use of antipsychotics for early psychosis and at-risk states is clear. Guidelines recommend against their use in these situations, and a substantial body of studies found no improvement—or even worse outcomes—for those taking antipsychotics.

However, according to the authors of the current study, doctors tend to ignore this evidence.

“Although RCTs and guidelines have recommended against the use of antipsychotics for CHR individuals, clinicians often do not follow the guidelines. The complexity of daily clinical practice has often been used as an excuse for clinicians to offer easy therapy instead of optimal therapy.”