New research supports a new, dialogic, non-medicalized approach to helping people who hear upsetting voices. The “Talking with Voices” (TwV) approach, which frames voice hearing relationally and understands it as often a product of trauma, was investigated by researchers via qualitative interviews.

The researchers found that TwV allowed individuals to understand the meaning and purpose behind their voices, which enabled them to work toward healing past trauma.

The authors, led by Kerry Middleton of Canterbury Christ Church University, describe the history of the development of alternative understandings of voice hearing:

“Romme and Escher’s seminal work in the late 1980s and the subsequent work of the Hearing Voices Movement have been fundamental in reconceptualizing voice-hearing in ways which center the narratives of voice-hearers themselves and use ordinary rather than medicalized language (e.g., “voices’ rather than’ hallucinations’).”

“Romme and Escher’s explanatory model suggests that voices often ‘arrive’ in people’s lives as part of a meaningful reaction to unresolved traumatic life events. Engagement with voices is therefore actively encouraged to explore content, develop meaning from the experience and understand voice motives. Drawing upon the knowledges and experiences of voice-hearers, voices are often viewed as people, beings, or parts of the self with whom the hearer has a relationship.” 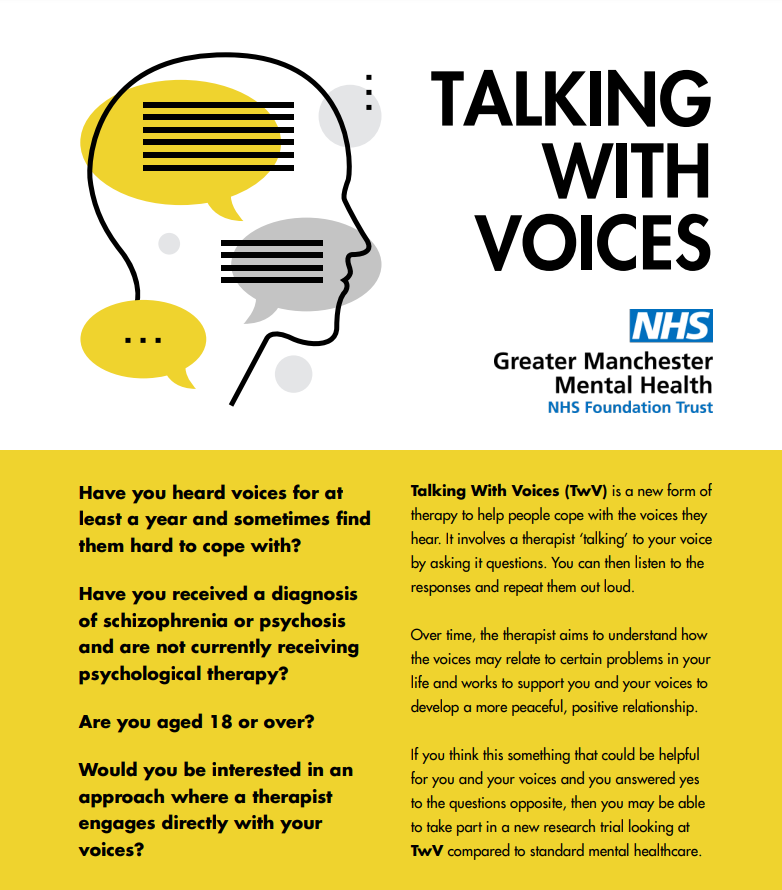 Although there are a number of dialogical approaches to understanding voice-hearing, including Avatar Therapy, Relating Therapy, the Hearing Voices Movement, and Compassion for Voices, among others, TwV, also known as “Voice Dialogue,” is one of the newer approaches to be manualized and evaluated systematically.

The TwV approach conceptualizes voices as parts of the self that have been adaptively disowned as a way for the voice-hearer to navigate adverse life events. From this perspective, these disowned parts of the self can engage in conversation with one another and the voice-hearer, with the understanding that dialogue can reduce conflict and lead to improved relationships between the individual’s different selves.

In the current study, researchers conducted qualitative interviews with 10 participants recruited through a Hearing Voices Group or connections through the group. During the interviews, half of the participants expressed a desire to include their voices in the discussion, with a total of 10 voices participating, ranging from 1 voice to up to 4 voices for each participant. The researchers used Interpretative Phenomenological Analysis to examine the interview content and elicit themes across participants’ experiences.

“Voice Dialogue is a powerful enabler of positive change; A safe base is key; Medicalised services and lack of availability of the approach can be barriers to change, and Good relationships, flexibility, and ‘fit’ of the ideas are facilitators of change.”

In their discussion of how TwV can lead to positive change, Middleton and colleagues highlight how the approach allowed for a dialogue to open up between voice-hearers and their voices, which in turn improved relationships between the voice-hearers and their voices, enabled for an understanding to be gained of the meaning and purpose of the voices, provided a path to begin to heal past trauma, and positively affected other relationships.

One of the participants voices described their experience of the process:

“It felt like, at long last, someone wanted to listen to our pain because we were hurting. Even Jackie didn’t know about this [before the dialoguing]. It was like a manuscript that’s been in a dark cupboard, and someone flashes a torch onto it.”

The “safe base is key” theme brought to attention initial apprehensions about dialoguing with voices, with some voice-hearers expressing concerns that it might be unsafe for them to permit someone else to converse with their voices. Participants emphasized how developing a sense of trust in the process requires time and that the intervention needs to occur during times of stability due to the personal and emotional investment dialoguing requires.

Participants identified potential barriers to the approach as it is largely unavailable and not accepted or understood in mainstream medical services that pathologize voice hearing.

One participant discussed their experiences of using the TwV approach both within and outside of formal services and expressed concern about the negative consequences that can arise with honesty about one’s experiences:

“In services: ‘You don’t know how [staff] will react, and so people have to censor what they say . . . I was hospitalized the moment I said about people being able to . . . read my thoughts.’ Outside of services: ‘I could just say whatever I felt, and it wasn’t ever a problem, and everyone else could do the same.’”

Under the “good relationships” theme, participants emphasized the importance of having open, non-judgmental, trustworthy, and courageous facilitators.

One participant described their experiences with their facilitator:

“There was a real emphasis on safety and choice . . . [Facilitator] acknowledged the reality of [the voices] . . . Even towards things that are very strange and unfamiliar, [facilitator] was just persistently non-judgmental and open-minded. . . He didn’t take sides, he wasn’t about me against the voices, or helping me tell off the voices for being evil or nasty or critical or ruining my life . . . he was curious and compassionate. It just helped me reconnect with feeling curious about what was going on, and not just dismiss it and ignore it and be angry about it.”

Participants also highlighted the need for social support, flexibility, and a framework that allowed them to make sense of their experiences.

One limitation of the study includes its use of Hearing Voices Groups to, directly and indirectly, recruit participants, which may have resulted in a sample of persons who had already tended to find the TwV approach beneficial. An additional limitation is that the participants were predominantly White British individuals.

The inclusion of diverse samples in studies of voice hearing is essential to ensure that all perspectives are heard, particularly from populations that tend to be most at risk of being pathologized for their experiences. For example, racial/ethnic background and socioeconomic status influence who is diagnosed with schizophrenia versus who is not.

Additionally, individuals from marginalized backgrounds, such as those in the transgender and Black communities, tend to receive significantly higher rates of schizophrenia diagnoses than those from majority backgrounds. Further, persons belonging to ethnically marginalized groups tend to experience disparities in pathways to mental health treatment. They are more likely to experience coercive treatment due to systemic inequalities and racism.

Although the TwV approach was found to be helpful by the participants in reducing distress and addressing past trauma, the researchers acknowledge that a major challenge to implementing this approach on a larger scale is the dominating biomedical understanding of voice-hearing, which pathologize voices and tend to dismiss voice-hearers as “unreliable reporters” of their own experiences.

However, despite the strong influence of the medical model paradigm, alternative ways of thinking about voice hearing have become more prominent. For example, Hearing Voices groups have begun to receive increased attention in research and treatment, with some groups even being integrated into standard psychiatric care settings.

This increased attention to ways of understanding and helping those who hear voices that emphasize the dignity, respect, and humanity of the individual shows promise for a future where approaches are taken that allow for meaningful connection and empowerment.