A couple of years ago, I chanced upon a headline on Mad in America…

“Of Course I’m Anti-Psychiatry. Aren’t You?”

It was served up by Ted Chabasinski, and on the face of it, Ted’s challenge was not for me. My ambition at age 18 was to forge a career in psychopharmacology, and I duly set out along that firmly laid and narrow path. First step, a BSc in Pharmacology from University of Wales, Cardiff, and then straight on to a PhD at Manchester University to research movement disorders caused by neuroleptic drugs. But not far along the way, I stopped to sniff the air. Things didn’t smell right. It was the early 1990s, and this was my first whiff of the rot at the core of psychiatry.

Many years later, as I read Ted’s blog, his call to arms made perfect sense:

“If we want to change the horrible mental illness system as it is now, we have to take risks. If we are afraid to call this system what it is, why should people outside our little bubble pay any attention to us?” 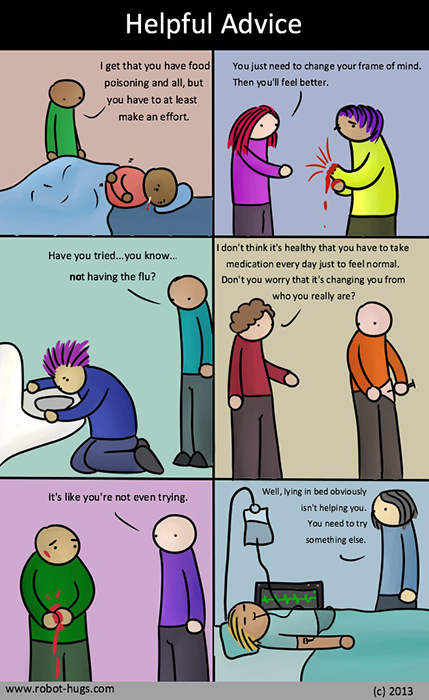 Why indeed? Over the coming days, the question of how to reach people “outside our little bubble” began to gnaw. At about the same time, a certain comic strip by Robot Hugs was making the rounds on social media, turbo-boosted by psychiatry’s celebrity pawn, Stephen Fry (yes, him). Here it is: “What if physical diseases were treated like mental illness?”

… and it went down a storm. “Spot on! Simply brilliant! SO true!”

Robot Hugs had cracked it. Deliver your message by cartoon and everybody will lap it up — even the ever-so-clever. Cartoons can have a weird, mesmeric effect on people. A good cartoon will punch through like nothing else, and what is more, people really seem to trust them. What struck me most about this cartoon was the universally credulous response. It generated an awful lot of tweets and media coverage, but I don’t recall anyone who said, “hold on a minute here…”

And so, with the Robot Hugs cartoon chafing on my nerves, and Ted’s words echoing round my mind — “Of course I’m anti-psychiatry. Aren’t you?” — my imagination kicked in and a new alter ego began to form. A creature with an elongated snout, tenacious spirit and ferocious foreclaws, all fired up and ready to rip gaping holes in psychiatry’s monstrous facade. 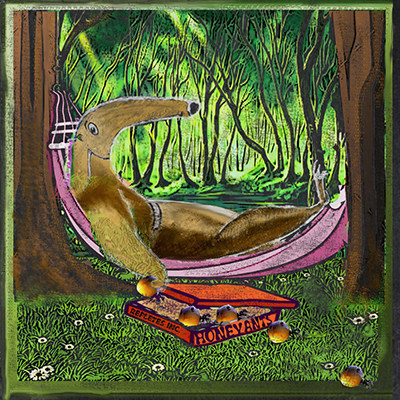 But how did I get here? What turned me from loyal acolyte into fearsome-clawed rebel, itching to take on the high priests of psychiatry? Well, there is nothing like being given a taste of psychiatry’s vile medicine for igniting the revolutionary furnace and getting it glowing white hot.

In my early 20s, my sense of self began to disintegrate. Slowly at first, then rapidly accelerating until gravity could no longer hold me. Tectonic plates were shifting, universal truths were being revealed to me, and I felt that I was able to ‘see’ clearly for the very first time. That’s how I came to be placed in the care of skilled professionals at the best specialist psychiatric facility in the region. Exposed and vulnerable, I looked to them to help me track down the pieces of my shattered self, put them back together, and offer me a kindly, steadying hand along this precarious, rocky stretch of my life’s path.

The ‘safe and effective’ treatment I received at their expert hands left me pole-axed and gasping, like a goldfish tipped from its bowl. Emerging from the psych ward to a life where just about everything had been stripped away — career, friends, daily routine, self-confidence, social role — I groped my way from day to day, glazed and unresponsive. My conscious brain was no help at all — I had no way of explaining to myself, or anyone else, what I had been through — but some part of me knew exactly what had happened: Psychiatry had rolled up its sleeves and taught me a lesson. And it was a lesson I wouldn’t forget… I sure as hell would never go back for more.

But despite the vow I made to my battered inner self that I wouldn’t ever risk another evidence-based pummelling, I had placidly swallowed the medical line that I was doomed to a life of incurable and progressive brain disease. Psychiatry’s worldview of diagnosis, disorder, medication and malfunctioning brain circuitry was the only show in town, it was all I had ever known, and I never once stopped to question it. As the weeks and months stretched into years, the impossibility of separating my ‘self’ from the ‘disease’ took its toll, and the passivity solidified into intractable despair.

It was in this fugged-up, listless state that I stumbled onto the nascent internet and straight into the e-community ‘Madness’ set up by Sylvia Caras. Billed as a safe space for “people who experience mood swings, fear, voices and visions,” it seemed a promising place to explore, but little did I know that this band of Mad Pride and anti-psychiatry activists would take me gently by the hand and turn my world around.

Spending time in their company, I began to feel the life force returning to my body and mind. Psychiatry had got it WRONG! Dead wrong! I wasn’t ‘ill’ at all… I was MAD! Mad as blazes. And for a time, I became one of them — a mad movement resistance fighter, an anti-psychiatry activist — it was just what the doctor ordered.

They taught me this slogan: “Recovery begins with non-compliance.” And I recognised instinctively the true meaning and power of these simple words. Within the stifling confines of mental health care, ‘non-compliance’ and ‘medication non-adherence’ are used synonymously, but in reality, non-compliance is about something far more elemental — it is a healthy act of human resistance, an urge to reassert autonomy, to fight for self-determination, to kick against the powers-that-be.

The years steamed by, my fledgling career prospects rapidly receding in the rear-view mirror to become a speck on the horizon, then gone. New and unexpected opportunities came into view which I headed for and embraced with renewed energy and courage. Meanwhile, the Madness e-community waned, eventually disbanding as the internet mutated and ballooned into a different beast… and the anti-psychiatry fire which had flared in my veins died down and found a quiet place to lie dormant within me.

Two decades later, a cartoon anteater emerged fully formed from the rekindled embers. And so, in the guise of Auntie Psychiatry, I set out to renew my acquaintance with an old nemesis. Catching up didn’t take long.

“Why, you haven’t changed a bit!” I exclaimed in amazement.

How difficult can it be?

The business of cartooning proved to be a lot more involved than I had anticipated. Ideas and images came thick and fast, but finding ways to distil a complex and nuanced subject into a single image was no piece of cake. With time and experience my skills improved, and I had enormous fun looking at an issue from different angles and teasing out the tangles of each messy scenario. At university all those years ago, my pharmacology tutors placed great value on the art of Critical Appraisal of the Scientific Literature, and the knack of assessing a piece of research for the strength of the design, validity of the research method, and the soundness of the authors’ conclusions became second nature. I silently thanked my tutors as I gifted this knowledge to Auntie Psychiatry. Here is an example of how she used it… 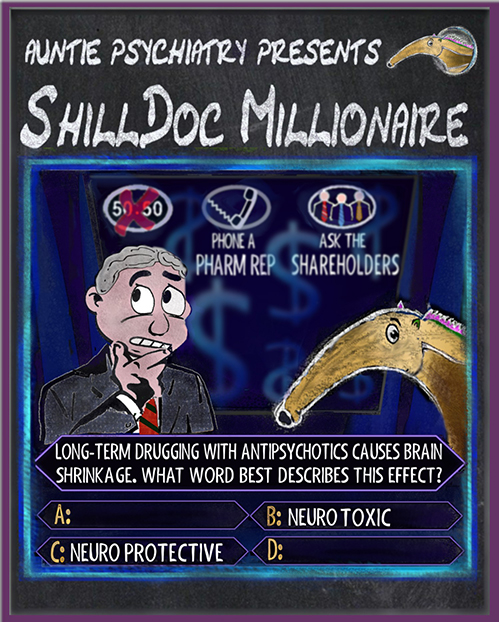 Damning evidence of severe brain damage caused by long-term use of antipsychotics has been stacking up for decades, and for all that time, psychiatry’s thought leaders have freely spun the data to present a truth of their own. The knowledge I picked up from my truncated research career, and my own brief exposure to Haldol in the 1990s, gave me forewarning to steer the hell clear of ‘antipsychotics.’ A lucky escape? I can’t help but feel that had I followed doctor’s orders and stuck to the prescribed treatment regimen, I would’ve ended up a long way distant from this happy vantage point. 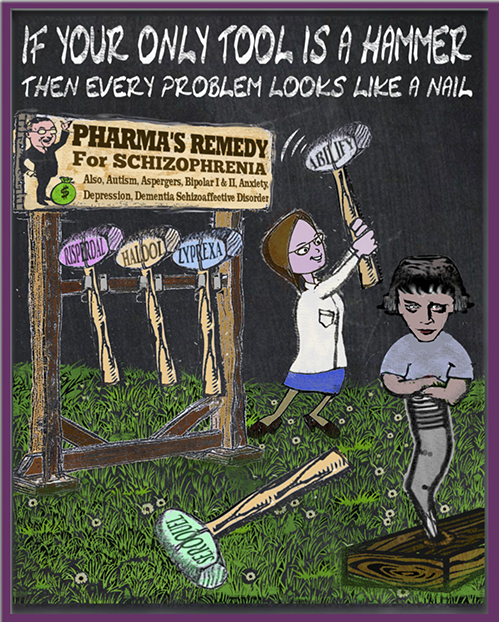 What does it mean to be anti-psychiatry?

It’s a puzzle that has occupied me for some time, although not everyone struggles to find an answer. Professor Allan Young, chair of the Psychopharmacology Special Committee, Royal College of Psychiatrists, recently commented for an article on anti-psychiatry by the BBC:

He considers anti-psychiatrists outliers, calling them “a mixed bag of diverse groups” encompassing everyone from “’flat earth’ types with odd ideas about health to, at the other end, psychiatrists and other mental health professionals”.

I love the way Allan Young sets out his continuum of ‘anti-psychiatrists’ — flat-earthers at one end, mental health professionals at the other, all tarred together with the same anti-psychiatry brush. The lively debate around the distinction between critical psychiatry and anti-psychiatry is familiar to readers of Mad in America, but psychiatry’s heavyweight opinion leaders tend not to concern themselves with such niceties. Indeed, ‘flat-earther’ is a favoured insult lobbed at those who make inroads into discrediting their corrupt narrative, the implication being that the dominion of science belongs to them, and any outsider raising concerns can be dismissed as ‘anti-science.’ It is a powerful weapon, easily grasped by others and readily dispersed via mainstream and social media.

Ironic, then, that my background in science has equipped me with the grounding and confidence to tackle psychiatry head on, and advance a different understanding of anti-psychiatry to people who live beyond the confines of “our little bubble.” My hope is that Auntie Psychiatry will rattle round the internet for years, popping up in unexpected places to challenge psychiatry’s wall-to-wall disinformation. If you see her around, do give her a thumbs up…