American kids are being indoctrinated with psychiatry’s medicalization of all unpleasant feelings and experiences, via websites, movies, school, government, medical authorities, etc. Propaganda about scientifically proven brain diseases and their effective medical treatments is in the air kids breathe. It’s thus firmly ingrained in their mind by the time they’re adults. That’s why Robert Whitaker’s1 and Irving Kirsch’s2 clear disproofs of psychiatry’s claims didn’t shake America’s growing faith in them.

It is time for a new strategy. Rather than try to get adults to question their entrenched beliefs, why not reach out directly to not-yet-fully-indoctrinated kids? This could be done by creating counterpropaganda-embedded entertainment that shows how ridiculous and harmful the medical model is. For example: If psychiatry got its hands on Simba in Disney’s 1994 film The Lion King, what would the result have been?

Scene 1: Mufasa is annoyed by hyper/exuberant Simba’s repeatedly awakening him, by Simba’s inattention to his and Zasu’s orders, and by Simba’s impulsive and reckless ventures beyond the prideland. So at Scar’s urging, he takes him to Rafiki, the monkey psychiatrist.

After a 10 minute evaluation, Rafiki proclaims: “I’ve used my mystical powers to look inside Simba’s brain, and have seen that it’s permanently broken due to a disease called ADHD.” Mufasa then asks: “Should we do a brain scan to confirm this?” Rafiki replies: “Nah. It won’t show up. Only us wise, trusted monkeys can see it — have faith!” Mufasa wonders: “How do you know Simba won’t outgrow it as he matures?” Rafiki replies: “My crystal ball has shown me the future.” The camera pans to a crystal ball which shows a waiting room full of sedated lion cubs, and Rafiki on a big yacht wearing a captain’s hat.

Rafiki explains to Mufasa: “As king, you need to understand that we monkeys and you lions exist together in a delicate balance, as follows: We shoot lion cubs with tranquilizer darts daily, in order to block them from learning skills needed to solve their own challenges. Since they never learn to master any challenges, they’ll always need to return to us in order to get shot by daily tranquilizer darts. We’re all connected in this great ‘Circle of Profit,’ and Simba must now take his place in it.”

Scene 2: Timon and Pumba bring their newfound friend Simba to Dr. Rafiki since he’s sad. After a ten minute consultation, Rafiki announces: “No normal animal would feel sad merely because he witnessed his father getting stampeded while saving his life, and was then forever exiled from his friends, family and homeland. So the only way to explain his symptoms are these two words…” He then breaks into a song entitled ‘Chemical Imbalance’ sung to ‘Hakuna Matata,’ with these lyrics: “Chemical Imbalance! What a wonderful phrase. Chemical Imbalance! Ain’t no passing craze. It means no feelings for the rest of your days. It’s the biggest scam in history… Chemical Imbalance!”

Rafiki says: “Simba has a severe medical condition called depression. And he has a prior history of manic symptoms such as euphorically laughing in the face of danger, grandiose ideations about what he’ll do as king, and excessive singing/dancing/socializing/traveling. So I’ve diagnosed him with bipolar disorder and his treatment now is… more tranquilizers!” Timon asks: “Is there a blood test to verify his abnormal biochemistry?” Rafiki answers: “Actually, no chemical imbalance has been found despite 60 years of research. But I assure you that we’re real close to an amazing scientific breakthrough!”

Scene 3: Nala begs Simba to return to the pridelands to take his throne, saying, “The zombified lions there are starving because the hyenas have stopped sharing their prey with them due to a drought. Many lions are overdosing on heroin or committing mass maulings!” Simba replies: “I can’t since I’d miss my day program.” He turns to Mufasa’s spirit for advice. Mufasa scolds: “Remember who you are — a helplessly dependent invalid. You must accept your chronic disabling illness, and give up on ever becoming anything. It is time to take your meds.” The camera then pans to Pride Rock, for Scar and Rafiki’s ceremonial presentation of psychiatry’s latest wonder drug: a mix of Xanax, Adderall, suboxone, ketamine and ecstasy. The song “How to Get High and Die in the Pridelands” plays in the background.

Most Disney films depict obstacles being overcome by resilience, resourcefulness, and adaptivity. Similarly psychiatrized versions of them could thus be produced, in order to get the truth out to more and more kids. Let’s take Mad in America’s vital message to a broader, more open-minded and malleable audience, before America completely collapses from psychiatry’s insidious parasitism. Teens in particular can reason abstractly and often question and rebel against authority (which is likely why they’re the ones most often psychiatrically labeled and drugged3). They’re thus the ones who will likely be most receptive and interested in hearing us, especially since most of their lives are still ahead of them. 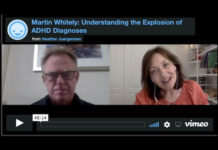 Understanding the Explosion of ADHD Diagnoses