On Wednesday, May 11, there will be an inquiry by a work group in the U.K.’s Parliament into whether increases in the prescribing of antidepressants are fueling a marked increase in disability due to anxiety and depression in the U.K.  I wrote about a similar rise in disability in the United States in Anatomy of an Epidemic, and the All Party Group for Prescribed Drug Dependence, which is the Parliamentary group that organized the debate, asked me to present the case against antidepressants.

I don’t now where this will lead, but it is encouraging to see this debate rising to the level of a work group in Parliament.

The effort to organize this session was led by Luke Montagu, whose father is a member of the House of Lords. He has publicly told of his having been incapacitated by psychiatric drugs and their withdrawal effects, with his entry into the world of psychiatry coming when he was prescribed Prozac after having a bad reaction to a sinus operation. Together with James Davies, a psychotherapist and medical anthropologist who authored Cracked (a really good “critical psychiatry” book), he created the Council for Evidence Based Psychiatry in the United Kingdom. As the name suggests, they believe that a close examination of the scientific literature reveals that psychiatric drugs, on the whole, do more harm than good, and that the use of these drugs needs to be rethought.

For me, the invitation to present to the work group provided a nice opportunity to update the case against antidepressants that I made in Anatomy of an Epidemic. The slides that I will present on Wednesday are attached here.

The data, I believe, are stronger than ever. You see a correlation between rising antidepressant usage and rising disability rates in country after country, with mood disorders the primary culprit. In the United States, for instance, the number of adults on disability due to mood disorders has risen from around 425,000 in 1994 to nearly 2.1 million in 2013. During this period, the percentage of the population taking an antidepressant quadrupled, from 2% to 8% (slide 3). 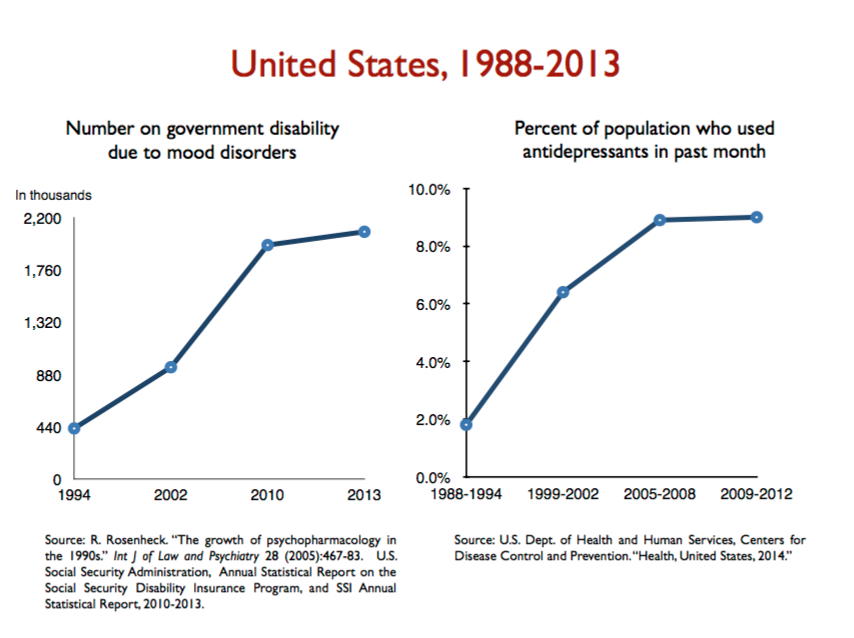 In Anatomy, I wrote of evidence that antidepressants increase the chronicity of depression, and how they also increase the risk that a person with unipolar depression will have a manic episode and convert to bipolar. While doing this presentation for this Parliamentary session, I found some additional evidence of these two risks.

First, there are a number of studies that show that depressed patients treated with antidepressants are roughly twice as likely to be depressed at the end of one year as those who don’t take the medications. And now look at slide 26: This WHO study captured the “Prozac Poop-out” factor. After three months, the medicated patients had a slightly greater reduction in their symptoms than the unmedicated group. But the medicated group stopped getting better at that point, whereas the unmedicated group continued to improve. The path to chronicity shows up in the time course of that study. 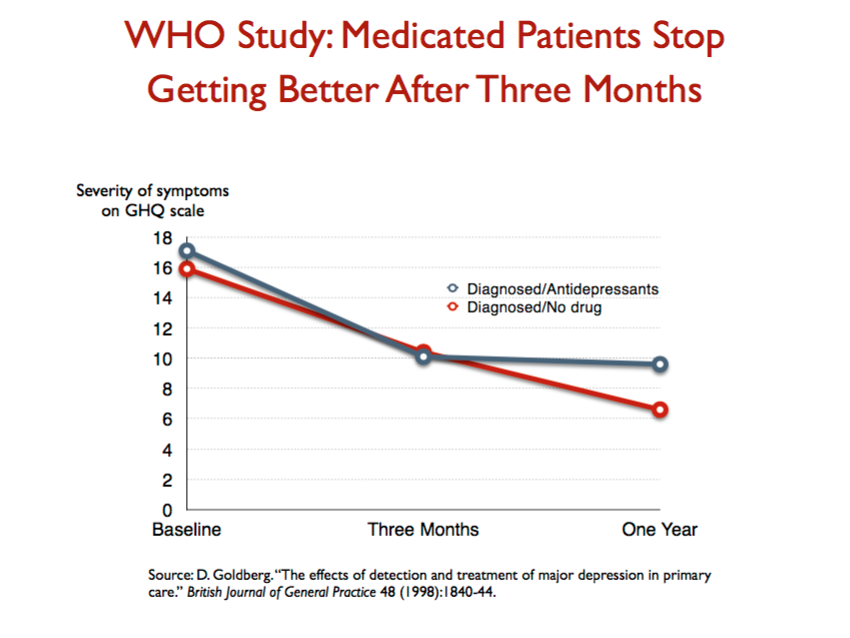 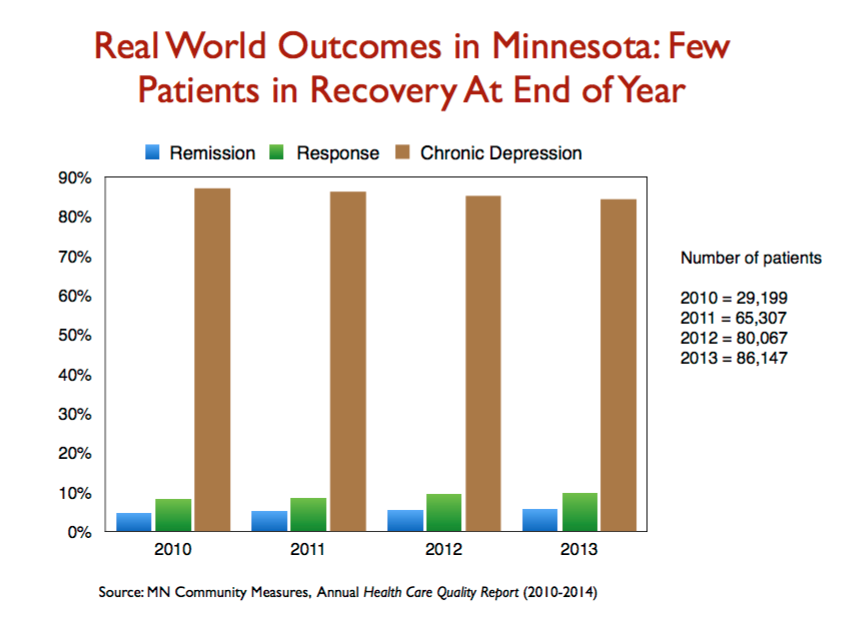 Third, Yale investigators conducted a large study of nearly 88,000 people initially diagnosed with anxiety or a non-bipolar mood disorder, and then reported on the number who converted to a bipolar diagnosis, with the rate of conversion assessed according to whether they were prescribed an antidepressant. The conversion rate, over a mean follow-up time of only 41 weeks, was more than twice as high for the group treated with an antidepressant. The investigators calculated a NNH of 23—number needed to harm—for those 15 to 29 years of age, which means that for every 23 people treated with an antidepressant, one additional person with “bipolar” is created. (Slide 36.) 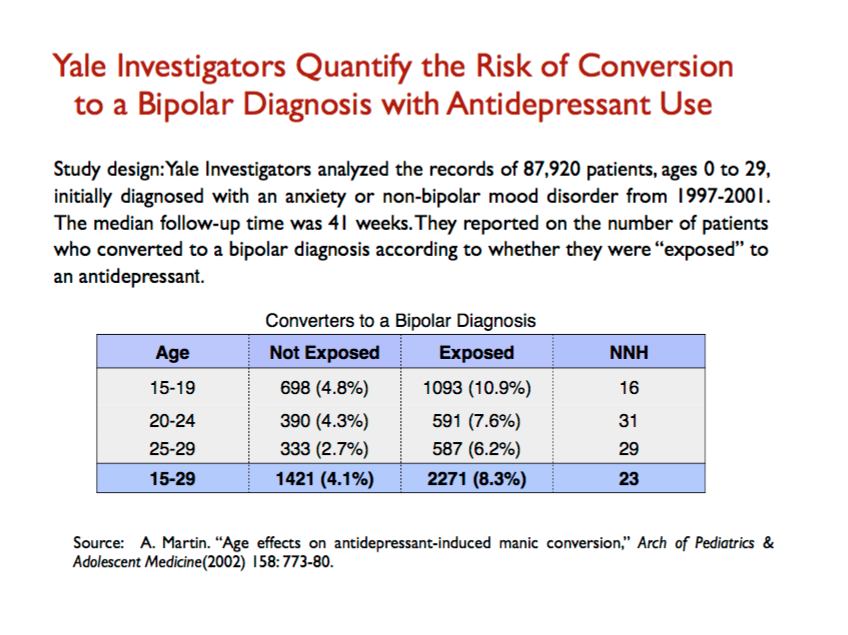 Next, you find that the rate of bipolar diagnoses among adults nearly doubled from 1994 to 2003, during a period of soaring use of antidepressants. Together, these findings provide a clear causal connection: as societies increase their use of antidepressants, they can expect a marked increase in the number of people diagnosed with bipolar disorder. (Slide 37.) 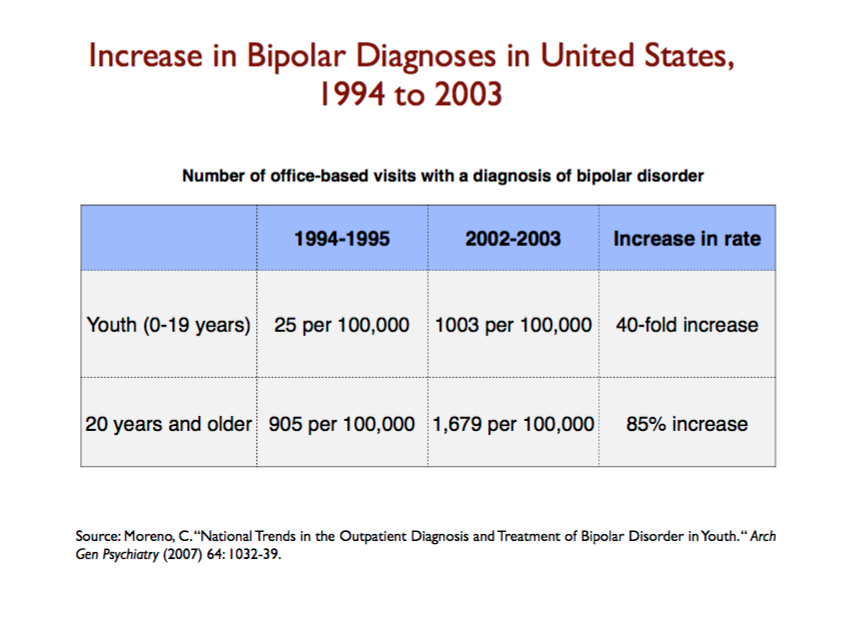 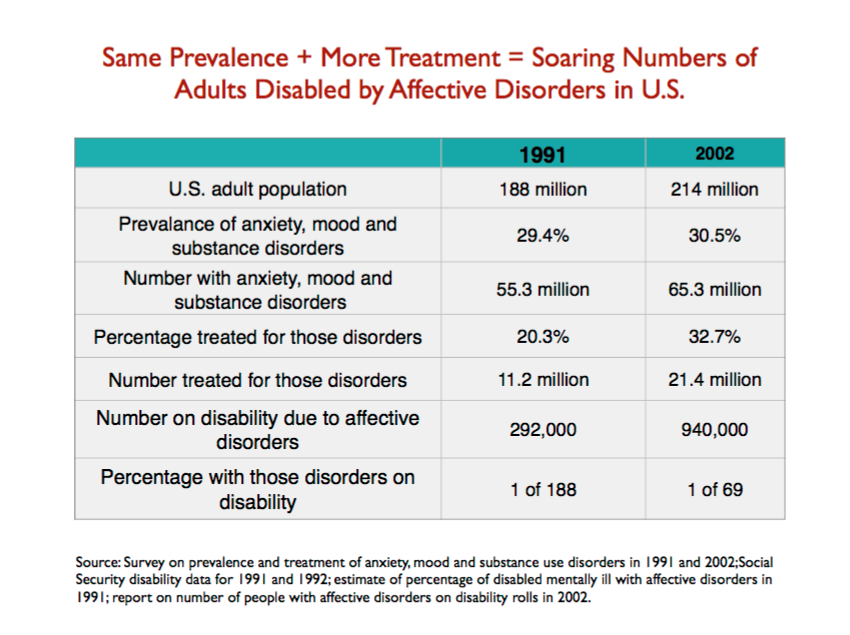 At the meeting, after I make this “case against antidepressants,” there will be a brief talk by Paul Brett, who has lived experience of this type, and then there will be a panel discussion, which will be moderated by Peter Kinderman, president of the British Psychological Society. The panel members include Joanne Moncrieff, who has published papers on the rise of both antidepressants and of disability in the UK, and Sami Timimi, both of whom are known to MIA readers. Allan Young, chair of psychopharmacology for the Royal College of Psychiatrists, is expected to provide a rebuttal.

The goal of the meeting is for the All Party Group for Prescribed Drug Dependence to set an agenda for investigating this public health concern in greater depth, and for crafting a response to it as well.