Spring is finally here, as rocky of a start as it may have had. Yet, instead of enjoying all those April showers that so predictably beget our May flowers, someone(s) somewhere has declared these two spots on the calendar to be Autism and Mental Health awareness months. (Who has the power to make such proclamations, anyway? More on that in a moment.) In their honor, Facebook has introduced its usual opportunistic and honorific picture frames, and many social service (and self-proclaimed advocacy) organizations are scurrying around to get something on their calendar so no one accuses them of shirking their duties during this oh so special time of year.

But some of us are not celebrating.

As it turns out, Mental Health America is responsible for ‘Mental Health Awareness month’, having initiated the trend in 1949. (See the article ‘The Downfall of Peer Support: MHA and Peer Certification‘ for more on them and the many other gifts for which we have to thank them. For that matter, also check out ‘Do NAMI and MHA Suffer from Anosognosia?‘, ‘Dear NAMI: My Apologies. I’ve Been Unfair.’ and/or ‘I am the Number 60‘, while you’re at it). It’s a little less clear from where Autism Awareness Month hails, but an organization called the Autism Society seems to be claiming credit. Even more clear is that Autism Awareness Day (falling within Autism Awareness month on April 2nd each year) was actually born in 2008 through a resolution from the United Nations following a panel that involved (shockingly) Autism Speaks. Autism Speaks is also responsible for the related ‘light it up blue’ initiative that drove this year’s social media recognition efforts.

Our strength to fight back would be stronger if we joined voices.

There are few around Mad in America territory who would argue against the dangers of the National Alliance for Mental Illness (NAMI). Whatever their efforts to the contrary have been and regardless of how much some of their local chapters may sometimes vary from the national status quo, they are ultimately a tool of the pharmaceutical industry, paternalistic advocates for our loss of rights, and impostors feigning representation of our voice. (That ‘Dear NAMI: My Apologies. I’ve Been Unfair‘ article referenced above actually speaks directly to how the pharma industry knowingly uses such organizations to their capitalistic advantage.)

But as a movement, we often fail to recognize the dangers of their much younger sibling named ‘Autism Speaks’. (NAMI, on the other hand, eagerly promotes them on their website). While Autism Speaks is more than 25 years NAMI’s junior, they’re sprung from the same roots. Each was dreamt up by family members (Autism Speaks by concerned grandparents, and NAMI by a group of desperate parents huddled around a kitchen table back in 1979).  They each proclaim themselves to be the biggest and the best, raising themselves up on the backs of those their missions claim it is their duty to ‘save’.

Ultimately, Autism Speaks is to autistic people as NAMI is to those with psychiatric diagnoses. Here’s just a small handful of examples exploring their similarities:

2. They prefer to speak for and not with whenever possible (which is most of the time): Consider this excerpt from codeman38, an autistic blogger:

Imagine, if you will, that an organization existed by the name of “Womanhood Speaks,” which, on the surface, appeared to be in support of women’s rights.

Now imagine that the governing body of this organization only included members of the male gender, with not one female represented in its ranks.  Imagine that its actual aim was to create a registry of all females and force them to become more masculine, completely disregarding the fact that a majority of females were perfectly content with their womanhood and even found it to be advantageous. Imagine that members of its leadership appeared on popular TV programs talking about the epidemic of womanhood and how it needed to be eradicated.

Doesn’t sound too appealing, does it?

Although this piece is focused on the phenomenon that is Autism Speaks, it echoes of the assumptions and approach of NAMI, as well.

3. They use tokenism as a shield: When accused of speaking too loudly or too often for an oppressed group, what’s the best defense? Employ a single member of that oppressed group and expect the accolades to roll in. If you’re a big enough organization (as both NAMI and Autism Speaks surely are), you may even be able to survive a small handful of such people (or a few chapters of concentrated groups of them) without the foundation of your organization being fundamentally moved. In the case of Autism Speaks, they’ve aimed especially low, and almost never make space for an actual autistic voice at all.

One notable exception, however, was that of John Elder Robison, an autistic man who stuck with Autism Speaks for about two years before writing a fairly scathing and open letter of resignation.

4. One of their main ‘tricks’ is to try to disappear the people they claim it is their mission to support: While NAMI is busy advocating for forced measures that so often mute people’s abilities to be present in the world and lead to early death, Autism Speaks approaches this issue even more directly. The primary thrust of their research (on which they spend about five times more than the 4% of their total earnings that apparently go toward direct support services for living beings) is to develop testing in utero that can identify autism so that autistic people are never born at all. No wonder so few autistic people want to stand by their side.

5. There’s only one way to do things, and doom awaits if you don’t: NAMI has worked for decades to convince vulnerable parents that psychiatric diagnoses are “just like diabetes” and to ensure they stay good and afraid of any sign of ‘non-compliance’ in their kids, touting the wonders of Involuntary Outpatient Commitment (also euphemistically known as ‘Assisted Out Patient’ treatment or ‘AOT’) as a tool to head off such peril. Meanwhile, Autism Speaks is much more concerned with Applied Behavior Analysis (ABA).

ABA essentially employs Skinner’s method of changing people’s behavior in an effort to make them… well, more palatable for other people. It rewards good behavior, sometimes also punishing bad behavior with so-called ‘aversives’. Understanding on the part of the person being so changed is not required. More than one autistic person has called it little more than dog training for humans, and post-ABA trauma stories abound. Yet debates sometimes rage between people who claim it’s wrong or dehumanizing, and those who swear that it was the only thing that made it possible for their autistic friend or family member to live in this world. (Perhaps the latter argument would be less difficult to swallow if ABA weren’t so commonly used not just on that which is deemed dangerous, but also on ways of being that others may simply find weird or annoying.)

Not sure yourself? Well, consider this: Autism Speaks openly supports the Judge Rotenberg Center (JRC), one of many ABA-focused facilities. JRC, based in Canton, Massachusetts, is the only place in the country that allows for such extreme aversives as administering painful shocks to change behavior. What does that look like? Check out this (extremely upsetting) video for an idea. (By the way, this ‘school’ also accepts people with psychiatric diagnoses. And, yes, it’s true. They do use less psychiatric drugs than most. Because, you know… physical torture works wonders, too.)

In spite of all this intersection, it seems there’s something still keeping us divided much of the time, though I’ve come to think that’s more misunderstanding than anything else. The medical establishment in both the psychiatric and autistic worlds appears similarly invested in diagnosing all things different as ‘bad’, then targeting them for eradication. People with first-hand experience in both arenas report having the impression they’re being punished or pathologized primarily for thinking, being, or interfacing differently with their world. That’s not to say there aren’t also real contrasts between the experience of being psychiatrically diagnosed versus autism (or being treated as such by those respective systems), or that they aren’t worth regarding (and respecting!) for their distinctions, too. It’s also not to say that this statement on its own might not be somewhat of an oversimplification, but it does seem that overall both groups are fighting for greater acceptance of simply being able to be them.

We aren’t so different after all.

There’s so much that could be said in closing, but an excerpt from the article ‘Don’t Mourn for Us’ by Jim Sinclair (originally published in the Autism Network International newsletter, Our Voice, Volume 1, Number 3, 1993) seems the best way of all.

Autism isn’t something a person has, or a “shell” that a person is trapped inside. There’s no normal child hidden behind the autism. Autism is a way of being… It is not possible to separate the autism from the person–and if it were possible, the person you’d have left would not be the same person you started with.

This is important, so take a moment to consider it: Autism is a way of being. It is not possible to separate the person from the autism.

Therefore, when parents say, I wish my child did not have autism, what they’re really saying is, I wish the autistic child I have did not exist, and I had a different (non-autistic) child instead. 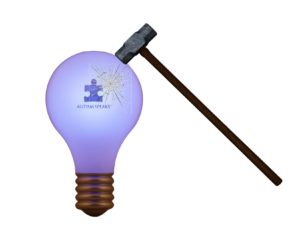 For more information on the problems with Autism Speaks and other related information (in the voice of autistic people), please see the following: