IN THE BEGINNING of the post-World War II era, psychiatrists thrived as outpatient therapists. In fact, many went on to further train as psychoanalysts. But then a series of plagues were visited upon them, which inflicted great hardships and threatened their livelihood as psychotherapists.

First was the increasing ridicule of their profession. Freud’s theories fell into disrepute, the 1973 Rosenhan Experiment1 showed that mental health professionals couldn’t distinguish ‘ill’ from ‘healthy’ people, and psychiatrists were being called ‘quacks’ who didn’t practice real medicine.

Second was an anti-psychiatry movement that started with Thomas Szasz’s The Myth of Mental Illness.2 Psychiatry was also attacked for committing cruel, coercive, inhumane acts like ECT, lobotomy, and commitment, as epitomized in the 1975 film One Flew Over the Cuckoo’s Nest.

Third was the closure of most state hospitals from the 1960s to 1990s. Many of their psychiatrists had to transition to outpatient therapy. This increased competition among psychiatrists for clients.

Fourth was the closure of many private psych hospitals during this time as well, due to difficulty obtaining insurance reimbursement. This added to the growing competition among psychiatrists.

Fifth was increasing competition from less expensive social workers and psychologists becoming therapists (most clients self-paid at that time). Their ranks rose 700% from 1950-1980, leading to their outnumbering psychiatrists by more than 12:1.3 And back then, clients often resolved their issues via therapy and thus were able to terminate, so therapists needed to regularly replace them.

Due to trouble finding enough paying clients, psychiatrists now needed to focus on billing health insurance companies. But they had to show that they provided specific ‘treatment’ of well-defined discrete conditions in order to get paid by them. The 1980 DSM addressed this by abandoning its prior focus on the environmental/psychological causes of outward ‘symptoms,’ and switching to a focus on the symptoms themselves. These were arbitrarily classified into newly-invented, serious-sounding ‘illnesses’ with easy-to-meet ‘diagnostic criteria.’

This DSM did not suggest that these ‘illnesses’ were biologically caused. In fact, it had a section called ‘Organic Brain Disorders’ for real physical illnesses like stroke and dementia. Its goal was mainly that the methods used to define and describe physical illnesses now also be used for ‘mental’ ones. The term medical model at that time conveyed that though ‘mental illnesses’ weren’t physical, the DSM had devised a model (replica) which allowed psychiatry to label and bill its clients’ problems somewhat methodically and systematically, as if they were real diseases. Insurance payments did improve in response, so psychiatry seemed to have been saved.

But then a sixth plague came: Insurance companies began limiting the number of psychotherapy (but not ‘medication management’) visits that they would pay for. They did so because weekly, lengthy therapy sessions are more costly than monthly, brief ‘medication check-ups.’

Psychiatrists adapted to these relentless plagues by totally abandoning their therapy niche and reinventing themselves as psychopharmacologists. To convince the public of the value of this role, they teamed up with Big Pharma to develop and promote what is now meant by the term “medical model” — faith in the DSM’s randomly-created categories as literally real, biologically caused, ‘medically-treatable brain diseases.’ Life was divinely breathed into these conceptualized labels.

The DSM became a sacred book (bible). Psychiatrists were now the authorities (priests) of a new religion that promises “symptom relief” (salvation) via miracle pills. Many of these are placebos, so any benefit is from trust (faith) in them rather than the pills themselves. You obey one doctor’s order (commandment): “Thou shalt take thy daily meds.” They proclaim (preach): “No problems are upsetting you. You’re just sad due to a chemical imbalance (an evil force that is ruling over you). But the miracle of modern science (a new god) has given us the power to fix your brain chemicals. You’ll be rewarded with heavenly bliss, just like the zoloft commercial.” Clients are also excused from guilt for their problems or their kids’ problems (offered absolution), since ‘bad genes’ are responsible.

Lured in by such deceits, they faithfully trust corrupt Big Pharma, and accept an idea as illogical, unlikely, and unverified as ‘Chemical Imbalance-ism.’ A religious approach to the distressed isn’t new — that’s how things were done from the 1200s-1800s, when such issues were seen as spiritual; moral failings. “The devil made me do it” merely evolved into “It’s due to my chemical imbalance.”

But then an eighth plague descended on psychiatry: Payment per brief ‘med visit’ was less than payment per therapy session, and clients now came only monthly instead of weekly. So to avoid big income reductions, psychiatrists now needed far bigger caseloads. Thus, the next step was to declare ‘mental illnesses’ to be permanent genetic defects that must always be corrected by drugs, so clients never stop attending ‘treatment’ (services). Psychiatrists prophesize: “You’ll always need meds for your lifelong illness, just as diabetics always need insulin for theirs.” To ensure that clients religiously return, MDs push many controlled substances since only a month’s supply is given per visit, their highs are very reinforcing, and once addicted people have awful withdrawals if they stop. Believing/complying with the MD ultimately causes lifelong illness; it’s a self-fulfilling prophecy.

Now psychiatrists’ caseloads would steadily grow as they acquired more and more ‘permanently ill’ — and thus permanently dependent — clients. And since typical ‘medication management’ visits only take ten minutes, psychiatrists who built up their caseloads enough to fill all their open slots in a day could now earn much more money than psychiatrists used to earn as psychotherapists.

But then the ninth plague arrived: As ‘med managers,’ psychiatrists initially attracted few clients, since people used to only take psychiatric drugs for severe emotional or behavioral issues. If all psychiatrists’ caseloads were to be full, then new recruits who previously weren’t considered ‘ill’ had to be convinced that they were, and that they too could benefit from their wonder drugs. This was achieved by successively expanding the criteria for ‘mental illness’ until ultimately all normal unpleasant/unavoidable aspects of life met them. It began with sadness being declared a ‘treatable illness’ with Prozac’s introduction for ‘depression.’ Normal childhood immaturity (‘ADHD’ and ‘bipolar disorder’) was next declared to also be a ‘treatable disease.’ In the latter case, psychiatry stuck its nose into an area that until then was none of its business — raising kids. Those who accept its gospel about ‘defective brain hardwiring’ are tricked into replacing the old way of raising kids via 21 years of hard, slow, devoted work, with daily rituals of sedation by ‘anti-immaturity pills.’

So that brings us to where we are today: Biological psychiatry has managed to stealthily become America’s first state-sponsored religion, by disguising itself as a helpful, scientific medical field. Millions have been led astray by its lies, and enslaved by its labels and drugs, just as the ancient Hebrews were enslaved by Egypt. But it took ten plagues to free them. Psychiatry’s tenth plague has only just begun: It’s the growing numbers of all of us here at Robert Whitaker’s Mad In America who are telling the public the truth. Americans will ultimately hear our warnings, and will be set free as well. 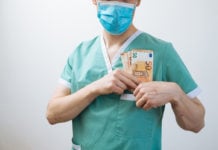