Every culture has its share of individuals who break down in bewilderment. People who hallucinate, behave beyond norms, seek to die, think in strange ways. Called many things—witches, patients, healers—we are met with as many responses, each reflecting how our culture understands help. The photograph below was taken in a Denver psychiatric hospital in 2016.1 Look closely: this is what help in the U.S. looks like today. 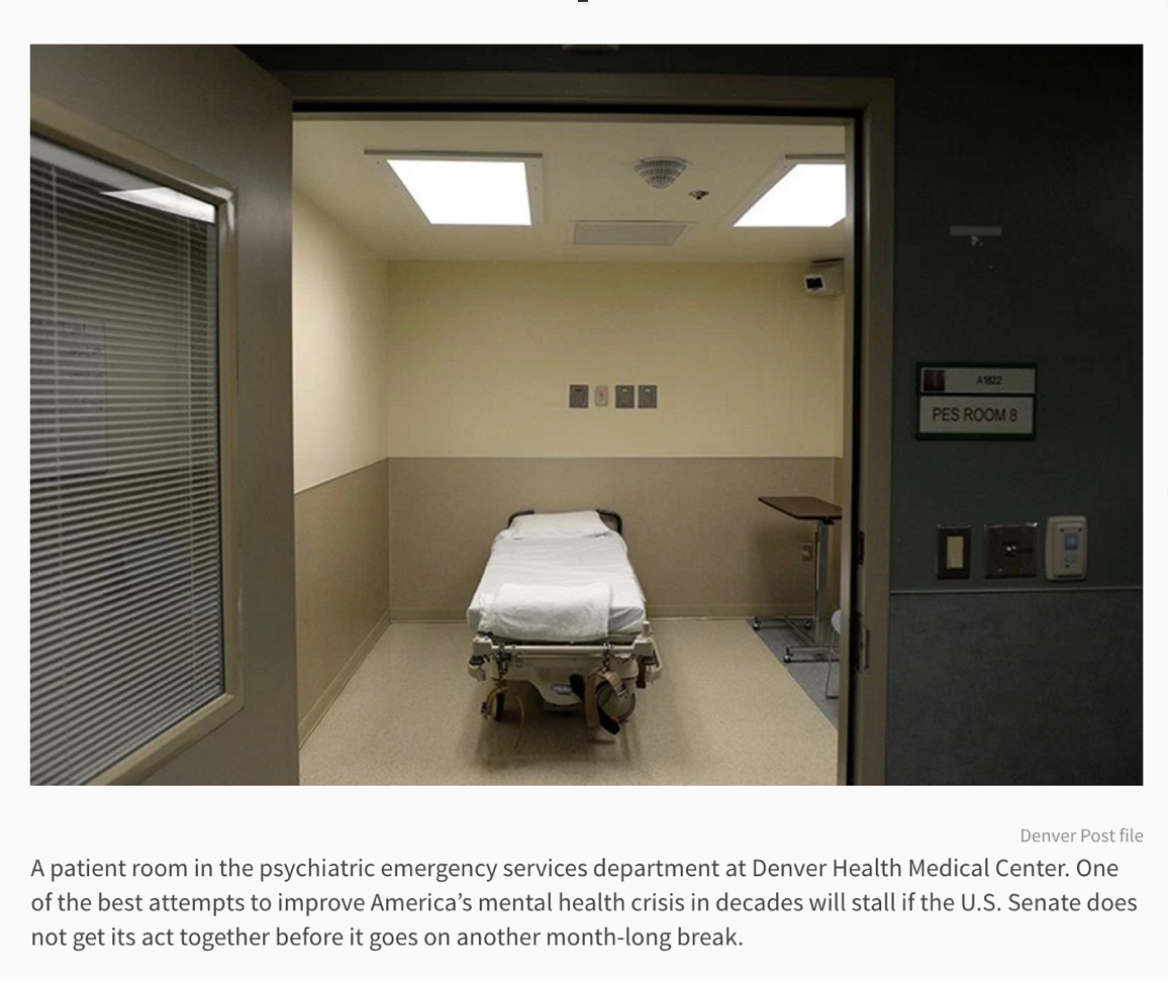 On a surface level, a clinical level, I see a rollaway bed with leather belts dangling. Belts that strap people down to be hauled without contest. I see an impenetrable camera lurking in the corner. Instead of first and last names, I see numbers and acronyms coding the roomʼs function. Fluorescent light drops evenly so nothing hides in shadow; I see brown and beige and dark grey cooling an empty box. Order reigns.

What I notice most, however, is not the presence of severe state technology—a scene akin to capital punishment—but the absence of the most essential ingredient for anyoneʼs sanity: love. It is impossible to love in this room.

By love, I do not mean an everything goes love that lacks discernment, nor do I mean a mutated tough love that absolves punishment. I mean a deliberate effort to be vulnerable with another person in an attempt to deeply bond. Of course, love is not all we need, but the culturally-ordained, legalized intention of this room—to help people in high distress—is unachievable without it. Love is necessary for helping minds. Remove a chimpanzee from her tribe and lock her in a cage, a week later sheʼs self-injuring (a trait never seen in the wild).2 We can forcibly tranquilize her until sheʼs too sedated to do anything but obey, or we can bring her back to the tribe.

But entering a psychiatric hospital I am no longer part of an ecology. I am stripped of clothes and context, my stories reduced to sputters from a broken sprinkler. Lit and watched in perpetual spotlight, I am objectified, examined. The gulf between myself and the mental health workers trained to hold a distance—to oppose love, flames the searing disconnection that caused my crazy. And for my bewilderment, I am not only exclusively liable, but punished, in this room where violence is state-sanctioned—a violence the United Nations calls torture.3 The most likely time anyone completes suicide is within two weeks of departing a psychiatric hospital.4 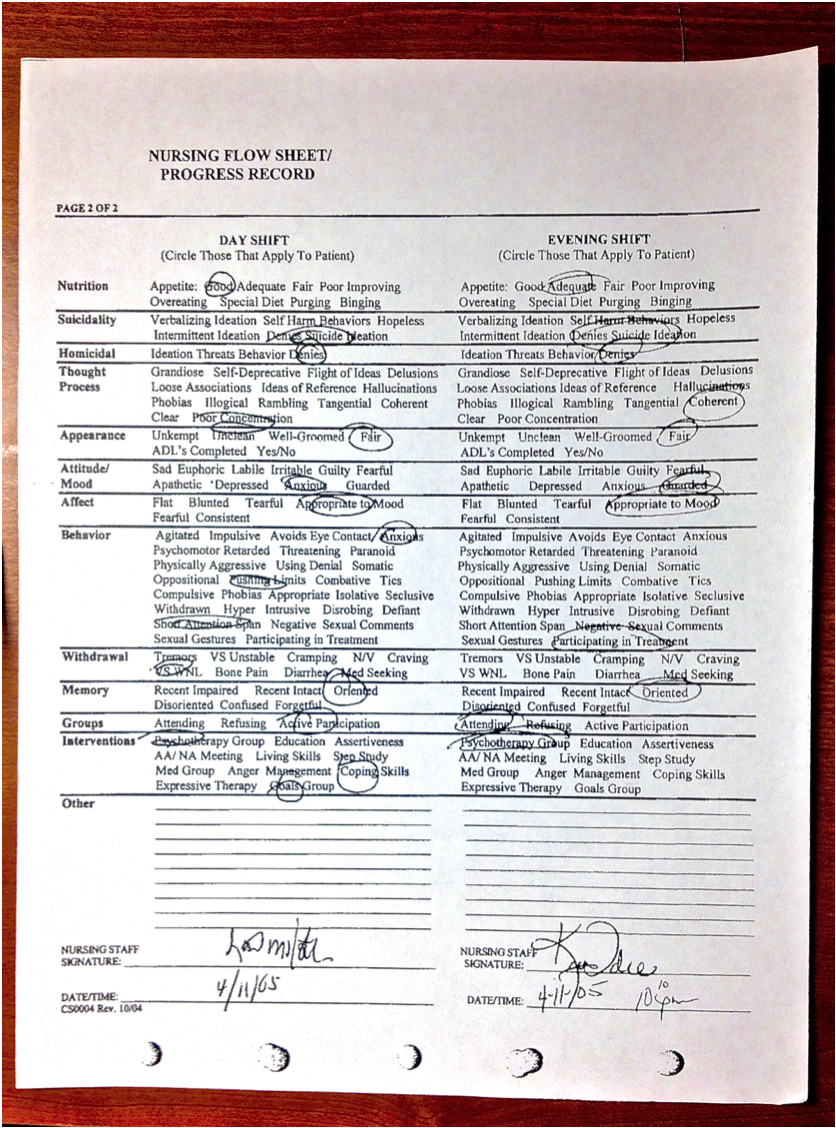 Look closely at this psychiatric nurseʼs note about me: this is the language of help. Blaming, scouring even, no mention here of the evaluator, just a collection of acrimonious terms illustrating my malfunction. Guarded, Labile, Psychomotor Retarded, Guilty, Ideas of Reference—words to affirm expertise of mind and behavior. Evaluative rather than relational, this language of help creates a distance necessary for arguing my reality as sickening. No one wakes up and says to their friend, I am feeling oppositional, grandiose, and intrusive today, with a self-deprecative and tangential thought process. We could talk together about fear, hope, pain, joy, confusion, excitement: concepts that include me in the tribe, even connect. But the first step to abusing someone is otherizing them. Thank God I was pushing limits that day.

I have worked in places with helping rooms. I have been locked up next to them (though privileged to have never been in one). I am not Pollyannaish to the difficulty of loving strangers who flip out or present danger, so in our culture’s vacuum of support, I can understand how this morally indefensible room intended for the least controllable of us makes logical sense. In the last hundred years, so did cramming ice picks in our eye sockets—which won its auteur a Nobel Prize,5 so did sterilizing us,6 so did institutionalizing us forever, so did electrocuting our brains against our will. All of these treatments were widespread, legal, celebrated, and considered modern scientific advances furiously defended by people with the highest education.7 They were committed in the spirit of our own good, and as such were unassailable by individuals who felt themselves harmed. Only when Life Magazine showed giant photos of these horrors to the American public did our culture begin to question whether it was helpful.8

Today, many U.S. citizens do not see that same monstrosity in this room. For decades, pharmaceutical companies and their colluding psychiatrists have crammed megaphones with unsubstantiated messages that mental illness is a brain disease— and nothing else. As such, help now means manipulating the brain, the organ of ultimate prestige; a legitimizer for psychiatry, and the most profitable.9 And theyʼve won. Witness Abilify, a drug originally developed for psychosis, last year outselling every other medicine of any class in the United States.10 Thatʼs a lot of power, and itʼs increasing.11 Never mind that trauma you likely experienced before breaking down;12 a brain isn’t manipulated on a couch but in a hospital, where doctors work, and who still, as always, know best. So the Denver Post editorial board is not outraged to see this room—in fact, their op-ed (from which the first photo is taken) is titled Congress is Painfully Close to Passing Mental Health Reform—nor is the American public. Because a brain doesnʼt need love, it needs control.

And controllers. To be clear: helping rooms are the problem, not necessarily their employees. I have sat at tables where hospital workers and psychiatric survivors alike acknowledge them as traumatizing, sometimes for both sides. Many psychiatric hospital workers find their work miserable and exhausting,13 in part because they must act in unnatural, professional (code for distant), and sometimes violent ways towards people. But insofar as staff hold all the power in these rooms, we need them to revolt.

Arguments for using state-sanctioned, legalized violence in this room often get tangled in details: What other option did we have for this person at this moment? Which illustrates the questionʼs redundancy. When you operate under a one-size-fits-all medical model funded with almost every dollar by the National Institute of Mental Health,14 there are no alternative routes in the mainstream to illustrate a better way (though they do exist outside the mainstream). We said the same thing about lobotomy: What other option? Answers cost something. Money follows public outrage.

So while I do not believe critics of this room and creators of new ways can outrun the psychiatric and pharmaceutical mammoth controlling the narrative, cash flow, and legislation for our cultureʼs understanding of help, I do believe we are building a critical culture of resistance. One ready to steer new ships should the public tide turn. And from that culture, my Hail Mary is another Life magazine exposé. A meme, a movie, a hashtag, an image that evokes the barbarism of this room to citizens who never know the bruise of leather straps with no reason to investigate psychiatric corruption. Something so potent and outrageous that the American public does not care anymore about What other option did we have for this person at this moment? They just see the horror and press Eject. No More. Like lobotomy, they say, To hell with your Nobel Prize, this cannot stand—and instead vote for love.