It was Michel Foucault, a French philosopher, who claimed that madness is a social construction, and that how we look at it is a direct result of the social forces at any given time.

Thus, during the Renaissance period, according to Foucault, madness was sometimes perceived as possession of a different kind of wisdom, where the mad were viewed as interesting people, deemed of admiration by some artists.

The famous painting by Bosch, The Ship of Fools, or The Satire of the Debauched Revelers, clearly shows this different view on madness. 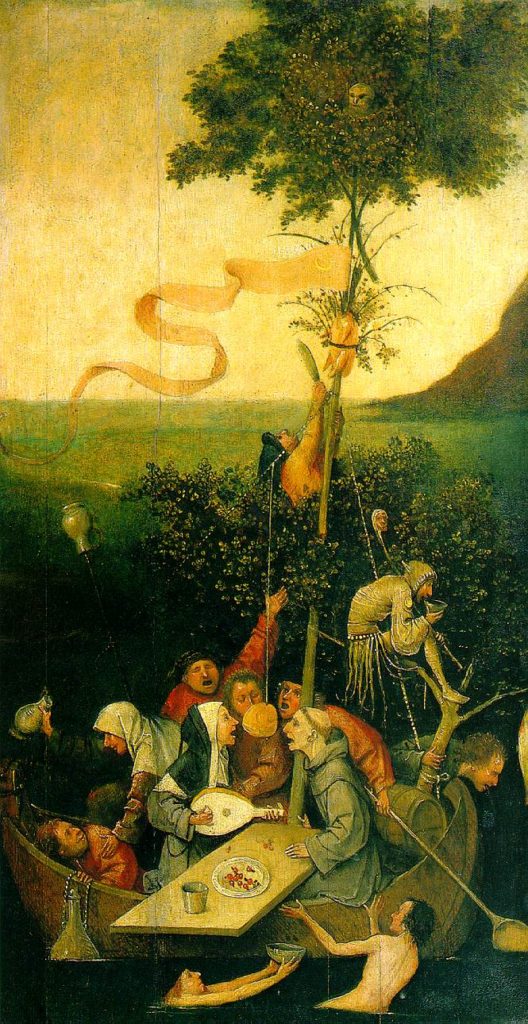 In it we can see the debauchery caused by some distinguished members of society. The two figures in front are a Franciscan friar and a nun, quite unthinkable at the time of the painting (1490-1500).

But this painting, in particular, has an additional meaning. The ship itself holds the biggest symbolism. Because it was on this kind of ship that the mad were put and sent into the fools’ paradise (into nowhere) in the Middle Ages.

In this painting, however, there is only one fool, who is put there with a purpose: to remind the viewers that it is the ship of fools indeed which is depicted. But by placing other characters, so called ‘sane’ members of the society in it, Bosch made his view on madness quite clear:

It is not the mad who should be sent away or treated but all the hypocritical members of the society who harm others in the name of God.

Moving from the Renaissance to the Age of Enlightenment, the view of madness started to change. The Age of Enlightenment was characterised by the predominance of reason, where all manifestations of weirdness started to be frowned upon. During the Enlightenment mad people started to be institutionalised, put away in secure facilities but still depicted as curiosities, where the public seeking entertainment could get it through the visits to asylums. In asylums the ‘normals’ could watch the mad, laugh at them, and think perhaps that they were lucky to have escaped such a predicament.

The art of that time still shows though the dilemma of madness, where the artists can be seen to reflect on the existential question: “Should we lock away these people, or should we instead admit the possibility of being different, look at it as something mysterious, something which can never be understood?”

One such painting by Tony Robert-Fleury depicts this puzzle of the question of madness, called La Salptrière (1795):

In this painting we can see a famous clinician, Philippe Pinnel, who was a chief physician at the famous Hospice de la La Salpȇtrière, an asylum for the insane in Paris. Philippe Pinnel advocated a more humanistic approach to the treatment of psychiatric patients, and there are some rumours that he even managed to liberate some inmates from their ordeal.

In this painting the artist shows how Pinnel orders the chains to be removed from a patient, which also demonstrates the growing power of psychiatry. Give the chains to one kind man in power, and he will liberate the oppressed. Give it to someone who wants to abuse the same power, and you are chained for life.

Moving back to the modern age, we don’t see psychiatric patients in physical chains anymore, but the power is still strongly in the hands of the psychiatrists, who can, by the act of simple words, deny a person of his freedom, independence, and joy of living. There are no physical chains, but there are still walls: walls of the psychiatric hospitals, walls of the forced injections, walls of diagnoses which create stigma and put a mental burden on one’s mind.

The story of modern psychiatry really begins in the middle of the last century, but its roots go back to the age of reasoning when madness was reduced by scientists to an ‘object’ of mind — an object which could be studied, analysed, and as some of them claim nowadays, even understood.

We can see it in the famous painting by Pierre Aristide André Brouillet (1887), called A Clinical Lesson at the Salpêtrière. In it we can witness a clinical demonstration given to postgraduate students by the famous neurologist Jean-Martin Charcot. 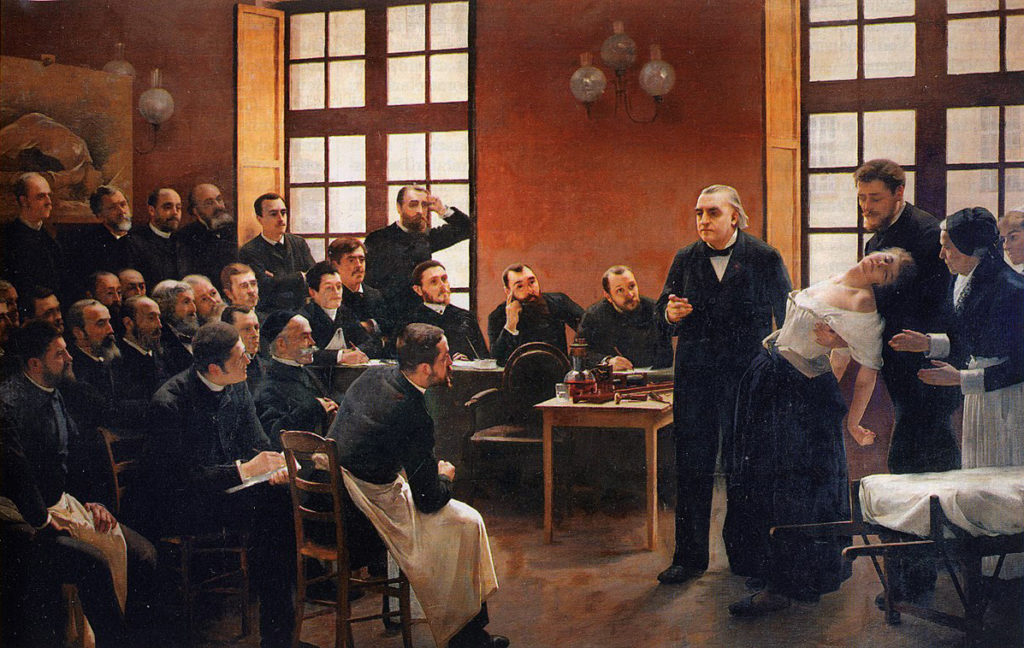 The patient, who is being studied, is depicted as an object and nothing more. She is there for demonstration purposes, reduced from being a person to an object of curiosity, an artefact on display. Her name is Blanche, and it is only the field of academic studies called ‘mad studies’ which calls for attention to her. The academics in this area want to know about Blanche, they are not interested in what Charcot tries to say.

Modern psychiatry reduces all humans coming under its attention to these objects of study, entities which are lost in the background behind the diagnoses assigned to them. Nowadays they are called ‘bipolar’, ‘schizophrenics’ or ‘schizoids’ and it is only when the individuals behind these labels start to speak that we see a person. We can learn then that every ‘bipolar’ is a different ‘bipolar’, that ‘schizophrenia’ and ‘bipolar disorder’ are almost the same thing, and that behind the diagnoses there are fascinating lives, spiritual journeys, but also confinements to psychiatric hospitals for life.

Psychiatry reduces us to objects of study, to victims of some mysterious ‘brain disease’, by its narrative of ‘mental illness’ which claims that “mental illness is like any other illness.” Not only does this make madness a purely scientific domain, deprived of its mystery, it also makes it extremely boring.

But madness is never boring. And it shouldn’t be boring. By reducing it to purely biological explanations (for which psychiatry has failed so far to provide any concrete proof), it removes the personal narratives behind it. It reduces Blanche to an object, it gives Beethoven and Gogol a diagnosis, it sees the whole oeuvre of Van Gogh as a battle of ‘mental illness’.

But as a mad person myself, as a person who doesn’t believe in the narrative of ‘mental illness’, I am interested in Blanche. I want to hear her story. I see the paintings of Van Gogh as the paintings of a true genius. I hear in the music of Beethoven the glory of an unusual and incredibly beautiful mind. I read Nietzsche with curiosity at the marvels of his unique mind and perception, and I devour Gogol for what he truly was, a talented writer, one of the best.

They say today that these artists would have a better life if they were on the medications that are available now — that they would enjoy better health if they had access to modern ‘treatment’.

But it is a big question whether they would be better off. From my personal experience, I know that under the medication that psychiatrists prescribe, one can’t really function, let alone create, write or paint. All the artists I know actively refuse the treatment on offer. Or they actively re-negotiate the terms and conditions of its use.

Would these marvelous people leave us the works of their genius minds if under a heavy dose of ‘antipsychotics’?

They would probably go less mad, but I doubt that we would then enjoy so many paintings of Van Gogh, or listen to Beethoven.

It is without a doubt that many people say medication made their lives better. Some welcome even their ‘diagnoses’ because it gives some explanation, it gives a reassurance.

But behind the diagnoses, and the narrative of ‘mental illness’, continues to lie the mystery of madness. Psychiatrists can resort to their ‘medical’ explanations as much as they want, but the truth remains the same as in the previous centuries.

Madness can never be truly understood, and madness is something that is still very mysterious, unique, and belonging to the other world, a world that only few of us have access to.

Has Critical Psychiatry Won the Debate on Reductionism?