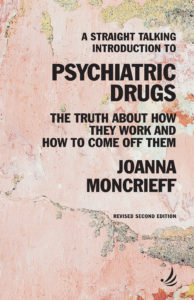 The second edition of my Straight Talking Introduction to Psychiatric Drugs has just been published, 11 years after the first. Some progress has been made in that time. Services for people with early psychosis now routinely prescribe low doses of antipsychotics and frequently support people to come off them.

The UK government funded the RADAR trial that is evaluating a gradual programme of antipsychotic reduction and discontinuation in people with long-term psychotic disorders or “schizophrenia” and several other trials of this sort are going on around the world involving people with a first episode of psychosis.

This research is being conducted by psychiatric researchers who recognise that psychiatric drugs can be harmful, and that their use needs to be minimised. From my experience, most psychiatrists are now aware of the evidence that long-term antipsychotic treatment causes brain shrinkage (although many are also enamoured with the misleading studies on antipsychotics and mortality produced by the Finnish group, which have been helpfully deconstructed in this blog by Robert Whitaker).

The fact that antidepressants can cause severe and prolonged withdrawal effects has now been widely recognised, although not without the concerted efforts of those who have suffered these problems.

The drug-centred model of drug action (the idea that psychiatric drugs change normal brain functions and mental states, and that these changes inevitably interact with the “symptoms” of mental disorders) is now established in some circles. It is recommended in the Power Threat Meaning framework and other convention-challenging texts and textbooks.

I know many psychiatrists who feel that, as well as making sense of the evidence, it provides a useful guide for a cautious and collaborative approach to the use of psychiatric drugs. Yet mainstream psychiatry has ignored it and presses on with business as usual. Prescriptions for antidepressants continue to rise and money is still poured into research trying to locate the specific brain abnormality that produces disorder X or Y.

Despite the failure of this research to provide any conclusive findings, clinicians and much of the general public remain bedazzled by the disease-centred model of drug action—the idea that drugs work by tweaking some underlying brain abnormality, sometimes specified as an imbalance or “dysregulation” of particular brain chemicals.

The few psychiatrists who have engaged with ideas about models of drug action take different positions. As I discussed in a previous blog, some leading academic psychiatrists have re-asserted the disease-centred view (though sometimes denying that this is what they are doing). Others argue that most psychiatrists have an ”outcome-based” understanding of drug action. This means they prescribe drugs because research has shown that they can be helpful, with no commitment to an explanation of why that might be.

We do not ingest a drug or recommend others do so without having beliefs about what it might do, however, and if psychiatrists provide no other explanation, then they are implicitly endorsing the disease-centred model of drug action. This is how they are generally understood nowadays, at any rate.

The drug-centred model obviously touches a nerve among mainstream psychiatrists. This is because it suggests that the way drugs “work” when prescribed for mental health problems is different from what drugs are doing in other areas of medicine. Those who oppose it are keen to defend the medical identity of psychiatry. It is ironic that the drug-centred model demands a much fuller understanding of the whole action of drugs on every aspect of physical functioning, mental states and behaviour, compared with the blinkered approach of the disease-centred model. The drug-centred model is, therefore, a much better basis for a properly scientific, medical training.

Some important research has been published since I wrote the first edition. Further follow-up studies show that people who take long-term antipsychotic treatment for psychotic episodes have worse outcomes than those who do not (e.g. Moilanen et al 2016; Wils et al, 2017). Most importantly, the follow-up of participants in the Dutch randomised trial confirmed that this is not simply a reflection of the more severe profile of those who end up on long-term treatment, but likely to be due to the drugs themselves (Wunderink et al, 2013).

More recently, a small but well-conducted study from Australia showed that antipsychotics had no advantage over placebo in people experiencing a first episode of psychosis who were receiving high-quality psychosocial support (Francey et al, 2020). These studies fundamentally change the way we should approach the use of antipsychotics. Combined with the mounting evidence that these drugs cause serious effects on the brain and other body systems, they underline the need to use antipsychotics as sparingly as possible, and to try to help people come off them where possible. Certainly some psychiatrists have taken this on board.

I have learnt a lot in the last 11 years—much of it from people who have had the courage to share their experiences of using psychiatric drugs and thereby publicise effects that official research has barely tried to address. Perhaps most importantly, I have come to appreciate how little we really know and understand about what psychiatric drugs do, especially in the long-term, and the terrible consequences this ignorance can have.

Take the example of benzodiazepines. We understand the mechanism of action of benzodiazepines better than most drugs. They produce their relaxing effects through modifying the actions of the natural neurotransmitter known as GABA. But we do not know exactly how they affect the GABA system, nor how these or other actions produce the range of disabling withdrawal effects that can occur. We also do not understand the mechanisms underlying the cognitive impairment that benzodiazepines appear to cause both during and after withdrawal from long-term use (Crowe & Stranks, 2017).

Most worryingly, as I highlighted in a previous blog, we have known since at least the early 1990s that some people develop new medical conditions or symptoms while coming off the drugs. These can last for months afterwards, possibly longer, suggesting the drugs have permanently altered the brain in some way. Yet we have no idea what benzodiazepines are doing to the brain that might result in these persistent and often disabling symptoms.

Unfortunately, neither this data nor the evidence that antipsychotics can cause permanent neurological damage (tardive dyskinesia) seem to have made us any more wary of launching new drugs without good data on their long-term effects.

The SSRI “antidepressants” flooded onto the market in the 1990s. At first, they seemed to be relatively innocuous. They are certainly safer in overdose and far less sedating than their predecessors, the tricyclic antidepressants. But then, as I described in my previous blog, withdrawal effects started to come to light, and more recently, persistent sexual dysfunction.  These effects suggest these drugs too are changing the brain in significant ways that we do not understand, and that may take a long time to normalise when the drugs are stopped.

Esketamine is one of the latest chemicals to be aimed at people who are looking for relief from chronic misery. The story of how esketamine was licenced illustrates why we have so much propaganda and so little data on the safety of psychiatric drugs. The FDA and other drug regulatory agencies were easily persuaded by Janssen to relax their criteria for establishing efficacy and did not express particular concern about the natural deaths, driving accidents, and suicides that occurred during or shortly after treatment. They had little curiosity about withdrawal effects and other long-term complications.

If drug regulatory agencies are not interested in data on immediate and long-term safety, then clearly there is no incentive for drug companies to produce it. Government funding agencies are also focused primarily on establishing the effectiveness of interventions, rather than exploring their harmful effects. Hence it is left to users themselves to highlight the adverse effects of drugs—some of which will only come to light after years of use and after thousands, maybe millions, of people have been exposed.

I am not opposed, in principle, to the use of psychiatric drugs. I believe, as I say in the book, that “some psychiatric drugs do help some people in some situations.” Having said this, I think it is likely that the vast majority of people who take psychiatric drugs derive little or no benefit from them, and yet are susceptible to all the harms they can induce.

It is people’s right to know how little we really know about these drugs. People should be informed that the story they have been told, implicitly or explicitly, about having an underlying chemical imbalance that drugs can correct is just that—a story—with very little evidence to back it up.

They need to know that these drugs are doing things to the brain that we do not understand properly, and people should be aware of how little research there has been into the long-term effects of the drugs and the difficulties of coming off them. I hope the second edition of A Straight Talking Introduction to Psychiatric Drugs will enable people to make better-informed decisions about whether to start or continue these sorts of drugs.