When I was researching Anatomy of an Epidemic and sought to track the number of people receiving a disability payment between 1987 and 2007 due to “mental illness,” I was frustrated by the lack of diagnostic clarity in the data. The Social Security Administration would list, in its annual reports on the Supplemental Security Income and Social Security Disability Insurance (SSDI) programs, the number of people receiving payment for “mental disorders,” which in turn was broken down into just two subcategories: “retardation,” and “other mental disorders.” Unfortunately, the “other mental disorders,” which was the category for those with psychiatric disorders, was not broken down into its diagnostic parts.

The SSI and SSDI Data

In Anatomy, I reported that the number of people receiving an SSI or SSDI payment because they had been “disabled” by a mental disorder rose from 1.25 million in 1987 to 3.97 million in 2007. I calculated this total by adding the SSI and SSDI numbers in the “other mental disorders” category, and then making an adjustment for the fact that one in six SSDI recipients also received an SSI payment (in 2007). This was a method that others—such as E. Fuller Torrey, in his book The Invisible Plague—had used to track the number of “disabled mentally ill” in our society.

Now here are the 2013 SSI and SSDI numbers for diagnostic groupings that, in pre-2010 reports, would have comprised the “other mental disorders” category. 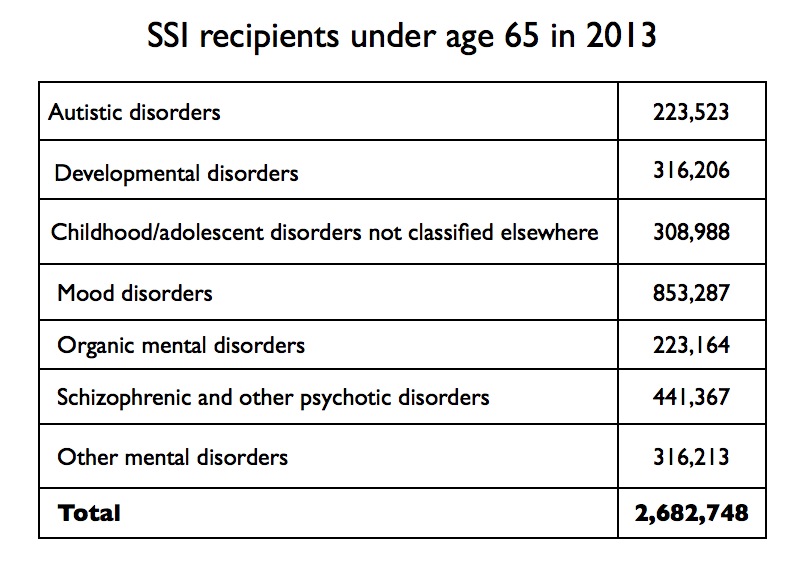 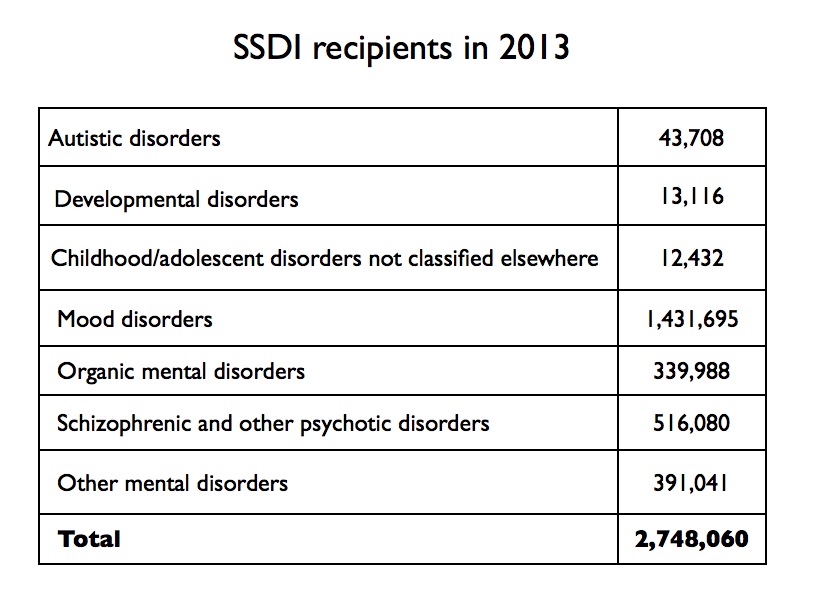 The Rise of Disabling Mood Disorders

As I wrote in Anatomy, studies on the long-term effects of antidepressants provide reason to conclude that widespread use of these drugs will increase the number of people disabled by affective disorders. The annual SSI and SSDI reports since 2010, combined with a review of earlier data on affective disorders, provide evidence that this is indeed occurring.

In 1955, there were only 50,937 people in state and county mental hospitals with a diagnosis of major depression or manic-depressive illness. The prevalence of those affective disorders, in a severe form that “disabled” people, was quite low. Moreover, the understanding within psychiatry at that time was that the great majority of patients in these two diagnostic groups could be expected to recover, and many would stay well indefinitely. These disorders were seen as episodic in kind, and during the time between episodes, people could expect to function fairly well.

However, modern studies have found that medicated depression is much more likely to run a chronic course. Indeed, in longitudinal studies, the disability rate for those who stay on antidepressants is much higher than for the unmedicated group. For instance, during a six-year NIMH study on depression that was conducted in the 1990s, the patients who took antidepressants were seven times more likely to become “incapacitated.” In a Canadian study on disability, antidepressant use was associated with a two-fold risk of going on to long-term disability.

In addition, the use of an antidepressant increases the risk that a unipolar patient will have a manic episode and convert to bipolar. One large study by Yale investigators of patients diagnosed with anxiety or depression found that antidepressants increased this risk three-fold. Once a person has turned “bipolar,” they are seen as having a chronic illness, which is regularly associated with poor functional outcomes.

Prozac came on the market in 1988, setting off the dramatic increase in the use of antidepressants in our society. During the 1990s, several researchers noted the increase in people with an affective disorder diagnosis appearing on the SSI and SSDI disability rolls (without attributing that increase to the explosion in the use of SSRIs.) One report concluded that affective disorders, by the late 1990s, now accounted for 37% of those on SSI and SSDI due to psychiatric disorders.

The annual reports since 2010, with the different disorders broken out, do produce one surprise: the number of people disabled by schizophrenia and other psychotic disorders has remained relatively stable since 2010, and lags far behind mood disorders. In 2010, there were 861,000 people on the SSI and SSDI rolls due to a psychotic disorder. This number increased to 883,000 in 2013, a rise of only 22,000. Psychotic disorders accounted for less than 20% of the disability due to psychiatric conditions in 2013.

Since Anatomy was published, I have gathered disability data for a number of other countries. The story is much the same in country after country. Iceland, the U.K., Norway, Sweden, Denmark, German, Australia, and New Zealand have all reported marked increases in disability due to psychiatric disorders, and in all these countries, where SSRIs are popular drugs, the increase is being driven, at least in large part, by affective disorders.

Critics of Anatomy have argued that I mistook correlation for causation when arguing that increased use of psychiatric drugs is driving the marked rise in disability numbers. But this is more than a story of correlation. It is a story of research predicting that this would happen, and that is particularly true in regard to SSRIs.

Think of the evidence in this way. You have research showing that antidepressant usage is associated with a higher risk of becoming disabled by depression over the long term, and you have research showing that antidepressants can stir manic episodes that will lead to a bipolar diagnosis. Then, you study the disability numbers, and find that in the Prozac era, when usage of antidepressants has soared, the number of people disabled by mood disorders has soared too. The disability data can be seen, in that equation, as confirmatory data.

The Social Security reports issued last month, detailing the 2013 numbers, provide yet another data point in this tragic equation. This website has also published numerous personal stories from people whose lives went astray after initial exposure to an antidepressant, and of course their stories also contribute to the “evidence base” on this matter. So too the rising disability rates due to mood disorders in other countries that have adopted widespread use of antidepressants–yet another data point. But, of course, this is a collective body of evidence that tells of harm done, and of a need to rethink use of antidepressants, and that is evidence at odds with the beliefs that drive our societal use of these drugs. And so the response:  correlation doesn’t equal causation. That is a response that sounds scientific, but in this instance, provides a way to turn a blind eye to what might best be described as an “inconvenient truth.”

And so the disability numbers march on.