STAT has presented itself as a reliable publisher of health news, and it has a number of first-rate, experienced journalists who write for it. However, on August 29, it published an opinion piece on adolescent suicide and antidepressants that revealed, once again, how regularly the mainstream media publishes information about psychiatric treatments that is misleading and easily debunked.

In the piece, Stephen Soumerai, a professor of population medicine at Harvard Medical School, and Ross Koppel, from the University of Penn, argue that the FDA’s black box warning that antidepressants increase the risk of suicidal behavior in adolescents is doing harm. They contend that the warning, which was first issued in October 2004, is “continuing to dampen effective drug and non-drug treatment and monitoring for depression,” and that this has led to a steady rise in suicide among youth 10 to 19 years old ever since.

To support their argument, they first return to an old, oft-repeated claim that issuance of the black box warning led to a drop in the prescribing of antidepressants to adolescents, and this in turn led to an increase in suicides among this age group. It would have been nice if the STAT editors had checked this assertion, for it is easy to show that it is factually wrong.

Here are the data.

Here’s a chart showing this: 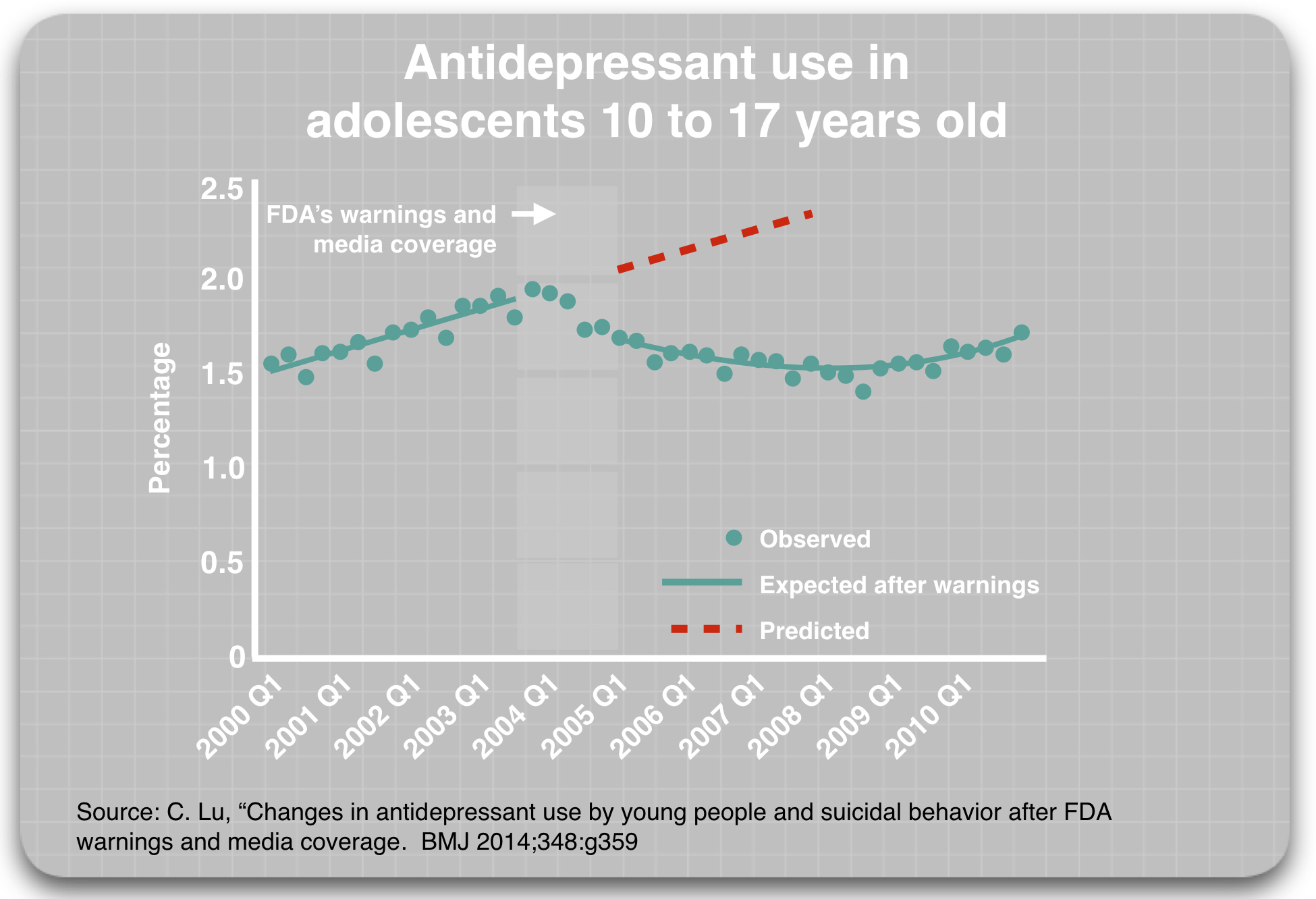 The question then becomes this: what were the suicide rates for adolescents aged 10 to 19, per 100,000 population, from 2004 to 2007? Soumerai and Koppel are asserting that suicide rates rose during this period, but as a report from the Centers for Disease Control reveals, the opposite was true.

Here are the suicide rates for this age group for those four years: 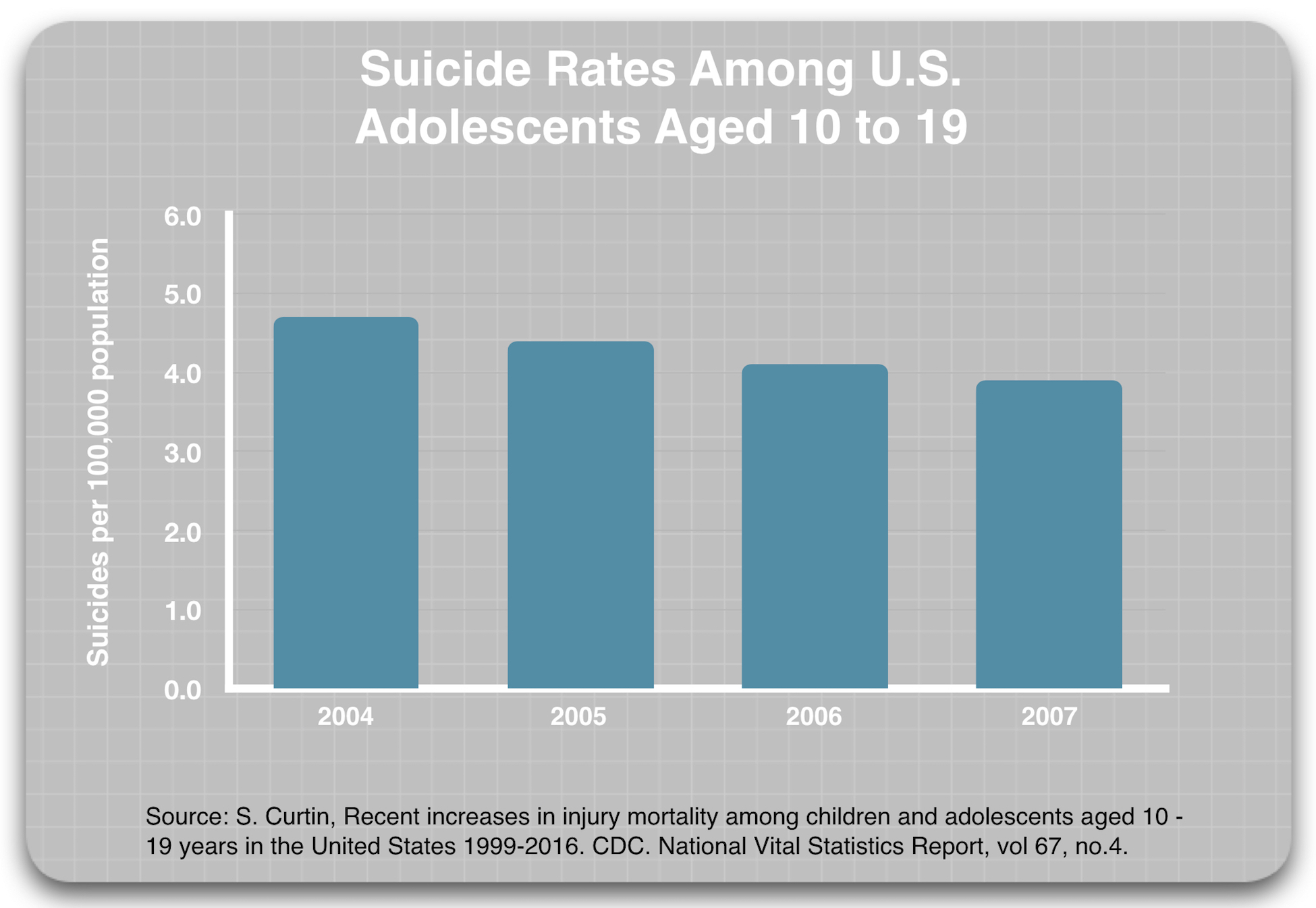 This is not rocket science. As anyone can see, the black box warning led to a drop in prescribing of antidepressants to adolescents, which was associated with a drop—rather than an increase—in suicides among this age group.

The irony is that Soumerai and Koppel published a graph that actually shows this. In the graphic (copied below), the yearly suicide rates are marked with dots, and you can see they show a decrease in suicides from 2004 to 2007. They are presenting the data cited above. But then what they do is draw a trendline back to 2004, which completely ignores the 2004 to 2007 data, and instead makes it look like the suicide rate has been steadily increasing since 2004, when the FDA first issued its black box warning.

This is a kind of visual misdirection that magicians use: The reader’s eye sees the trendline and thus misses the drop in suicides—as marked by the four yearly dots—from 2004 to 2007. You can see this misdirection for yourself: 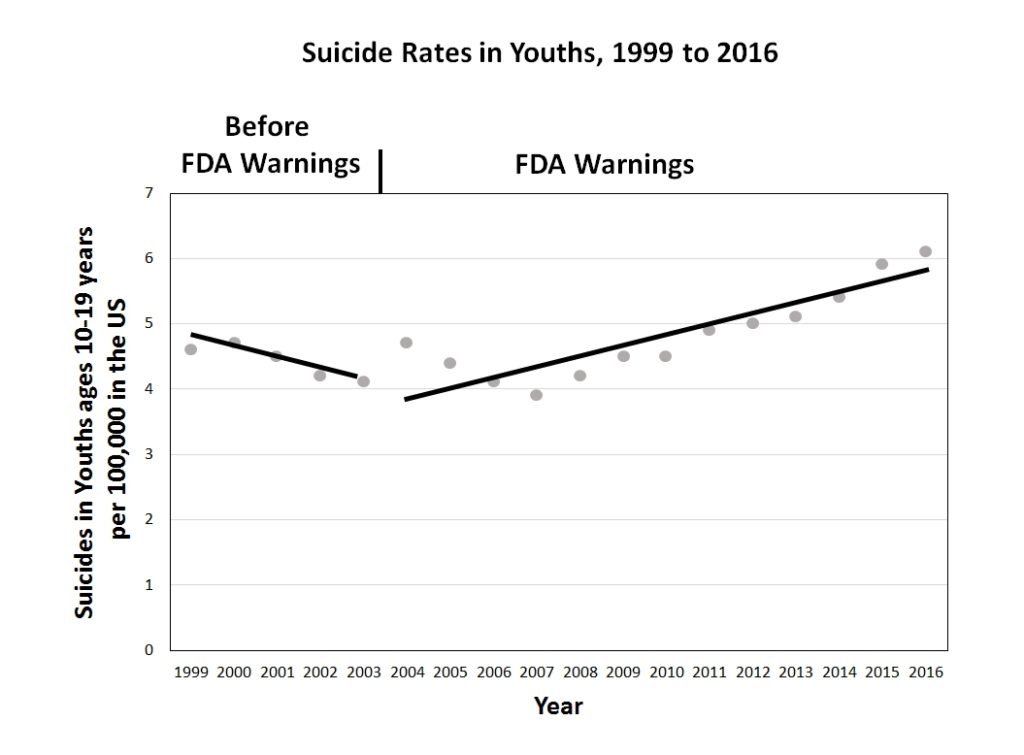 Having (wrongly) asserted that the black box warning led to an increase in adolescent suicides from 2004 to 2007, Soumerai and Koppel then make an argumentative leap forward in time. The warning, they say, is still dampening the use of helpful antidepressants and psychotherapy for depression, and still dampening the diagnosis of depression in adolescents. Then they blame this lack of diagnosis and lack of treatment for the steady rise in suicide among adolescents since 2007 (although they make it seem that the steady rise began in 2004).

So, clearly, in order to support this part of their argument, they must provide evidence that the black box warning has continued to discourage such treatment to adolescents, and has done so up to now. To make this case, they would need to show that the prescribing of antidepressants to adolescents continued at the same level as it was in 2007, when the prescribing of antidepressants had hit a low-water mark in response to the black box warning, and that the percentage of depressed youth who do not get treatment is the same as it was that year. That would be data that showed a sustained “dampening” effect of the black box warning.

However, they don’t present any such data, and that is because it doesn’t exist. Instead, the “correlational” data goes in the opposite direction.

That same year, in an article published in Pediatrics, researchers reported the following:

In short, during this period of increased suicide among adolescents (since 2007), the number of adolescents who were treated for major depression—with psychotherapy and with antidepressants—rose.

With this closer look at the data, we can see how grossly the STAT article misleads readers. Here is the actual correlative data since the FDA issued its black box warning:

The conclusion that might be drawn from this data is this: The black box warning worked for a few years, but its dampening effects have worn off with time, and as this has occurred, suicide rates in adolescents have risen. Recently, Martin Plöderl and Michael Hengartner published a paper detailing this correlation in detail (and wrote about it for Mad in America).

But that, of course, is not a conclusion that will be promoted widely to the public, which is why STAT’s publication of this opinion piece is so disheartening. STAT has built a good readership for its health coverage and a reputation for skillful reporting. But it has now provided a platform for a piece that, although it is easily debunked, will shape public thinking about the prescribing of antidepressants to youth. The public is being encouraged to worry that the black box warning has done harm because it has prevented adolescents from getting effective drug treatment, and it is being informed that there is scientific evidence to support this worry.

In short, STAT has lent its good name to a “false” story. Its publication serves as yet another example of how society gets misled, time and time again, about what science really has to say about the merits of psychiatric drugs.