This week Mad in America Continuing Education is launching a course on “creating system change,” and while marketing it to national organizations, we have been reminded anew that even though the societal discussion around psychiatry and its treatments has changed dramatically in the past twenty years, systems of care are—for understandable reasons— resistant to actually changing their practices.

The inventor Charles Kettering, who was director of research at General Motors from 1920 to 1947, summed it up this way: “People are very open-minded about new things, as long as they’re exactly like the old ones.”

We have close to 100 people signed up for the course, and we are encouraged by that. But when Bob Nikkel, the director of MIA Continuing Education, conceived of this course, we had set our sights on “reaching beyond the choir” and getting larger provider organizations to promote the course to their members. We were dreaming of an audience of 500 or more. I suppose that we had let our optimism get ahead of our grip on reality, but this occurred because it seemed that there is now a growing societal understanding that our current mental health system, from a public health perspective, has failed.

From a public health perspective, there are many findings that tell of the failure of our current paradigm of care. Here are just a few:

In addition, research on the long-term outcomes of people treated with psychiatric drugs  tells of a failed paradigm of care.

Together, these data tell of both a public health failure and a therapeutic failure. They cry out for change.

The Supporting Story of Science Has Collapsed

Our current paradigm of drug-centered care, for a diverse group of diagnoses, took hold in the 1990s, and did so in response to a story told jointly by the American Psychiatric Association and the pharmaceutical industry. The public was informed that schizophrenia, depression, bipolar, ADHD and so forth were diseases of the brain; that these diseases were due to chemical imbalances in the brain; that psychiatric drugs fixed those imbalances, like insulin for diabetes; and that a second generation of psychiatric drugs had come to market that was much superior to the first generation.

All of that told of a golden age of scientific discovery and therapeutic advance. Yet, that story—at least in research circles—has now utterly collapsed.

Since psychiatric care is seen as medical treatment, it is psychiatry, as a medical specialty, that establishes the “evidence base” for what should be done. Psychiatrists write the texts, set clinical care guidelines (for standards of care), teach the Continuing Education courses, author the research articles, and so forth. Providers are under strong pressure to conform to those standards, and thus change in most real-world settings needs to come from the top.

There are many individual psychiatrists who are championing the need for change in their field and working in new ways. However, psychiatry, as an institution, has not shown much interest in reflecting on the failures cited above.

The history of medicine repeatedly tells of the capacity of doctors to be deluded about the merits of their treatments, and thus to unwittingly do harm. To best serve its patients and the public good, a medical discipline needs to have an open mind regarding the merits of its practices, and the capacity to respond to evidence that one of its treatments isn’t effective, or even worse, is doing harm.

Unfortunately,  American psychiatry—as an institution that sets standards of care—has not demonstrated this openness of mind. Psychiatry has long had something of an inferiority complex in relation to other medical disciplines, and in the post DSM-III era, its leaders have regularly responded to criticisms with a mixed sense of outrage and self-pity. Those who would criticize its treatments are often dismissed as being “antipsychiatry,” which is to say that their criticisms are driven by ideology and not any reasonable review of science. Is there any other medical profession, its leaders lament, that has to suffer such insults?

Here is Jeffrey Lieberman, former president of the American Psychiatric Association, speaking before Congress in 2015, pinning the blame for a failing mental health system on its critics:

“Stigma of mental illness is pervasive in American society and is actively perpetuated by a virulent Anti-Psychiatry Movement. Psychiatry has the dubious distinction of being the only medical specialty with a movement dedicated to its eradication. (There are no anti-pediatrics, dermatology or orthopedics movements.) This movement is comprised by diverse constituencies who dispute the concept of mental illness and way to treat them including Scientology, the latter being motivated by financial designs rather than ideological reasons.”

This past spring, I was invited to present at a conference on scientific integrity organized by Peter Gøtzsche and others, and as part of my presentation, I investigated whether the top five psychiatric journals, in terms of their impact, had ever published articles on two issues of concern with the use of antidepressants. Do these drugs worsen the long-term outcomes of depression? To what extent do they cause PSSD: post-SSRI sexual dysfunction?

I could not find any mention of these two concerns in any of the five journals. Research findings on these two issues, which are of such obvious importance to informed use of these drugs, could only be found in less prestigious journals.

While these are topics that had been addressed in MIA Continuing Education webinars, I am pretty certain that there have been few, if any, CME courses offered to psychiatrists through mainstream channels that have ever addressed these concerns. 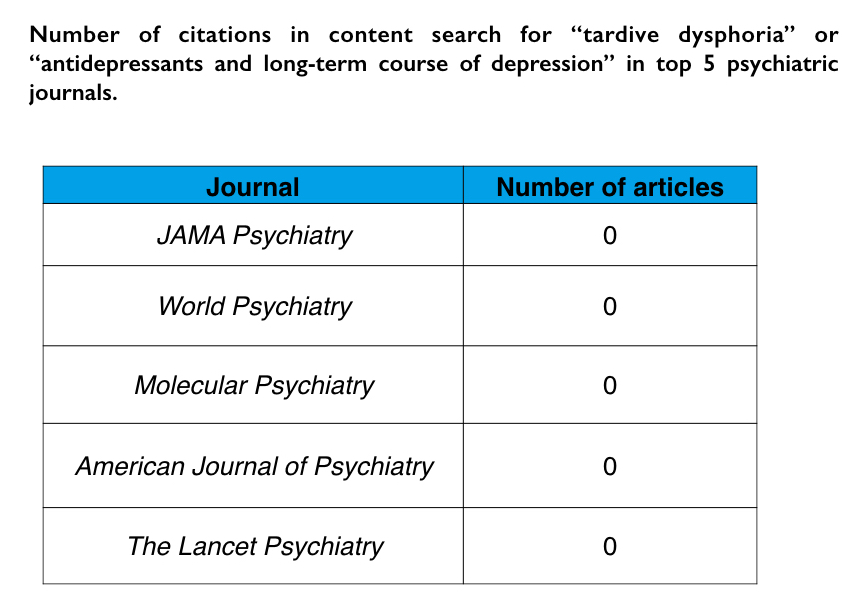 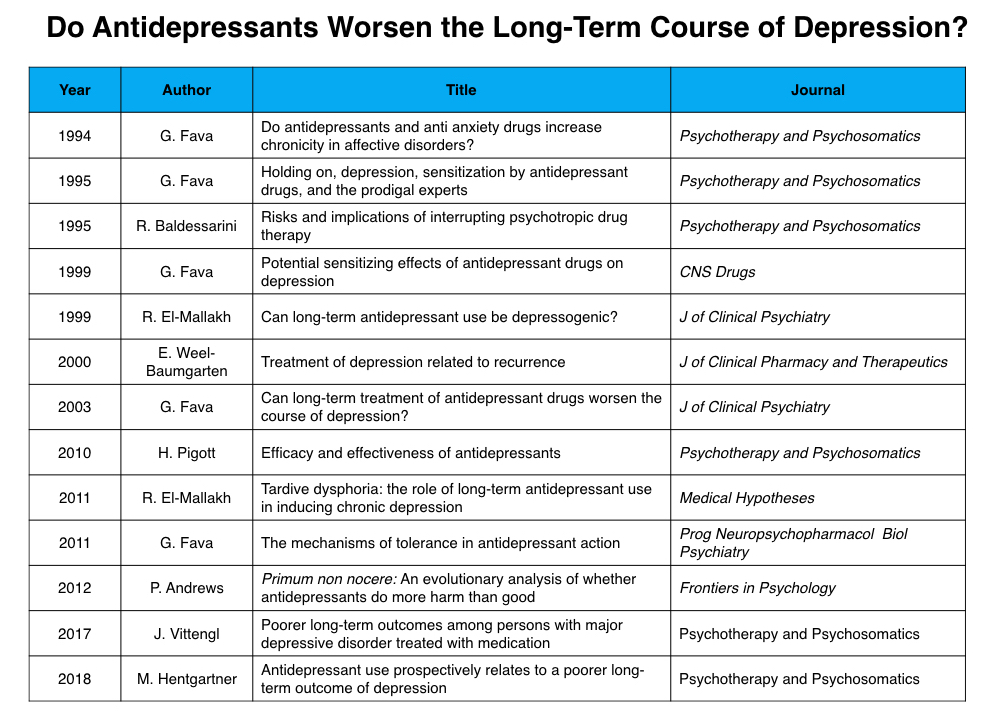 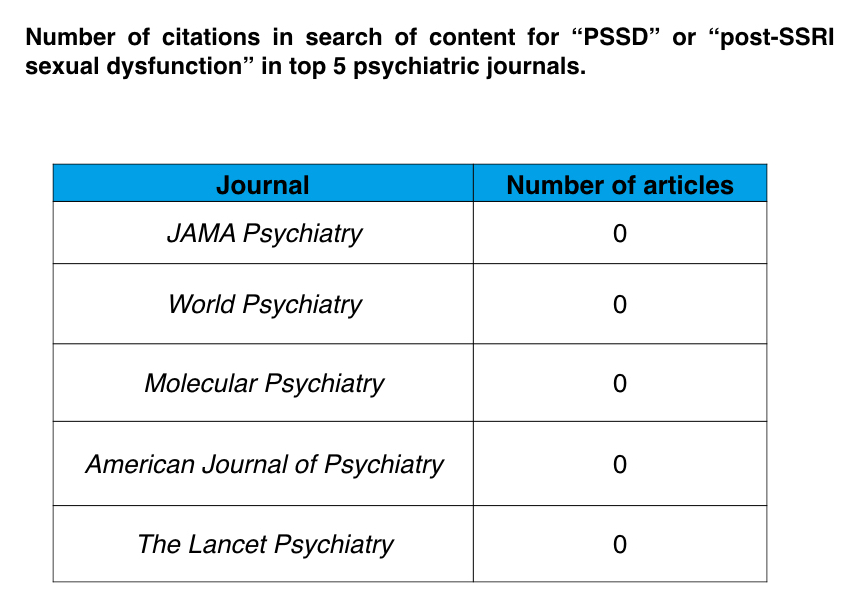 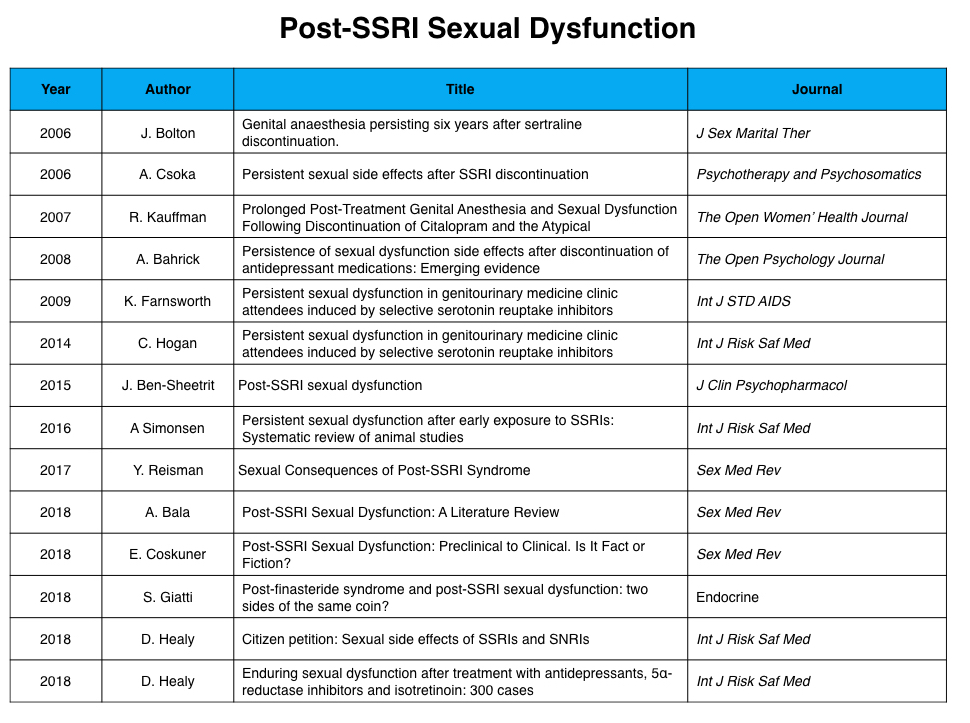 Providers in a Quandary

Without a mandate for change coming down from a governing medical specialty, it becomes nearly impossible for care providers to embrace systemic change. They may adopt new programs that add on to usual standards of care, or develop a more welcoming environment for their patients, but insurance companies are going to want to pay for the first-line therapies set forth in clinical care guidelines. Add in the usual resistance to change in most any organization, and it is easy to understand why providers of mental health services would be resistant to even hearing about ideas for “systemic change.”

That, I think, sums up the current status of psychiatric care. The story that was used to expand the psychiatric enterprise in the 1990s and early 2000s has collapsed and there is ample evidence that our current paradigm of drug-centered care has failed, but the medical specialty that oversees this realm of care has not shown any willingness to investigate or even acknowledge this failure. As a result, providers just keep on doing what they have been doing, which of course puts psychiatric drugs at the center of care.

Our Mad in America Continuing Education effort is, I know, a small enterprise. We are like a little gnat buzzing around a great big elephant that can be swatted away with a quick flap of the ear. But our new 10-session course will at least explore this landscape of “systems change,” with the presenters bringing to this topic a diversity of experience and perspectives. The presenters include psychiatrists, leaders in peer services, former directors of state mental health programs, and trainers experienced in helping providers implement trauma-informed care.

And how does the saying go?  You change the world one mind at a time? We like to think of our newest course in this way.

So What’s This About Another Webinar Series on Psychiatric Drug Withdrawal?