Regardless of race, gender, age, or ethnicity, people across the United States are increasingly choosing death as the only way out. More people take their lives than die from opioid overdoses — only with suicide, there are no drug dealers to blame or people to throw in jail (or punish with the death penalty) as a scapegoat. This past week alone saw the high-profile suicides of designer Kate Spade and celebrity chef Anthony Bourdain. And these deaths come on the heels of the results of a Centers for Disease Control study that demonstrated that suicide rates continue to rise and suicide is now a “leading cause of death for Americans.”

Kate Spade had been in and out of treatment for at least the past five years, likely with some of the best that New York City has to offer. Anthony Bourdain was no stranger to long, intensive treatments, having been in rehab for addiction to heroin and cocaine. Most people who have suicided did so after having sought out help.

America has seen an enormous boon in the past several decades of “advancements in treatment” and “promising new discoveries” about mental illness, yet suicide rates have increased by 30 percent and rates of disability from mental illness increased by two million adults between 1997 and 2009. 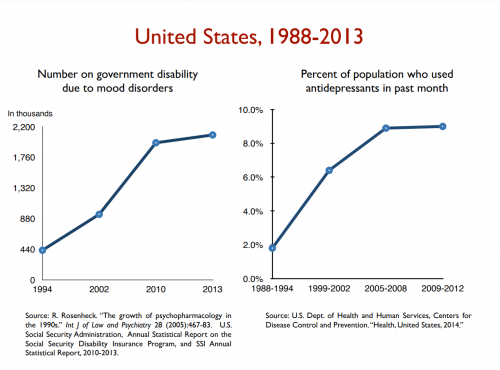 Interestingly, the go-to treatment for people who are feeling depressed and hopeless is associated with an actual increase in suicidality, violence, and murder. While drugs of all kinds (legal or not) can be helpful coping tools for some when in pain, they are not a panacea — and “antidepressants” can sometimes be the complete opposite of what they are hoped to be.

When do professionals and the public alike finally acknowledge that WHAT WE’RE DOING ISN’T WORKING? When do we say “If we want things to change, maybe we should change our approach”?! When does the media start to widely question what is happening in society rather than jumping to analyzing the individual?

As it stands, the public continues to be bombarded by trite clichés and empty suggestions that always end with some kind of message to “go to someone, anyone (just not me).”

“Call the suicide hotline. Know that you are not alone.”

The problem is, most of us are alone. The US, and most of Western society, centers around an individualistic culture that puts “success” above relationships, leading many to focus their lives on the pursuit of a fragile and fleeting illusion of proving oneself. This endless pursuit leaves a person crushed the moment the illusion of success disappears (which it always will). And, so, the chase is always on for more, more, more.

People accrue “friends” on social media in some kind of bizarre popularity contest, yet so often have no one to actually talk to when they are in need. A post on Facebook about cats or someone falling on their face might garner 50 “likes,” while a vulnerable and honest reflection of pain, need for connection, or hopelessness will tend to go ignored and result in lost followers. A selfie of a person in the midst of their happy, perfect life will result in a torrent of “Congrats!” while a picture showing what’s behind the mask might receive a couple of pity sad-faces while most rush to scroll quickly past such disturbing reality.

The thing is, no amount of talent, accolades, attention, intelligence, or beauty will ever replace love, intimacy, empathy, or human connection. No matter how many things a person buys, no matter how much status a person gains, and no matter how many admirers follow a person’s every move, this will never fill the gaping hole of loneliness — at least not for long.

Calling a suicide hotline when desperate and in need can be extremely helpful for many. There is something powerfully calming and healing about having someone really listen, seem to care, be curious about why a person is suffering, and be willing to be patient and calm while just sitting with a person’s story and pain. Therapy can also be extremely helpful for the same reasons.

What people need, however, is human connection, empathy, understanding, patience, tolerance, and a reason to love themselves and to feel loved by others. So, why have we come to a point where the only way people can really receive this is by going to a professional? What is wrong with our society?

Telling a person they are “ill” for suffering or being sad serves to further alienate the individual. It often results in the person feeling defective, and puts the problem inside the individual instead of recognizing that cultural and circumstantial factors are a problem. Studies have demonstrated over and over again that a biological illness perspective on human suffering leads to decreased empathy, increased desire for social distance, and increased prejudice and discrimination.

Worse, this focus on mental illness and individual suffering can sometimes lead those who are diagnosed to develop a lack of responsibility for how one treats others, lack of empathy for those not seen as sick, and a preoccupation with one’s internal state to the detriment of connection with others. Internalizing an illness explanation for one’s suffering leads to alterations in identity, reinforcement of abusive dynamics, decreases in hope and self-esteem, and decreased likelihood of seeking help.

In other words: we, as a society, are being told that if someone is suffering, the correct approach is to convince them of ideas that will likely lead them to feel marginalized, helpless, hopeless, worse about themselves, ashamed, retraumatized and less likely to reach out to others for connection and support when, in fact, connection and support are the very things most likely to heal. Logic at its finest.

Suicide rates, in fact, are highest in areas that report the highest levels of happiness. Maybe making a person feel different and abnormal for suffering deeply is not so helpful?

An aversion to pain and suffering does not negate its existence. A lack of empathy for self or others only results in greater pain, regardless of how deeply hidden it may be. Scapegoating a purported unseen “illness” may provide temporary comfort from acknowledging the horrors and injustice of the world, but it is a delusion — and one with fatal consequences for many.

“Make sure they/you get help.”

The current mental health paradigm is born out of a society that values short, immediate fixes. A society that harbors a sense of entitlement to some idea of happiness that corresponds to an almost complete lack of tolerance for pain or suffering. A society that isolates those who disturb the status quo, proselytizes that all problems will be fixed if you just buy X or go to Y expert, and actively fosters hatred and chaos to distract from the advancements of the privileged of society.

And so, when a person is sad, hopeless, anxious, fearful, experiences a spiritual crisis, or is angry and fed up with the hypocrisy and oppression he or she cannot ignore, the experts proclaim that the answer lies in mostly short-term fixes, an almost immediate effort to suppress any uncertainty or pain, marginalization through assertions of individual illness, and implicit blame (on the character and/or brains) of the individual for not being able to accept and deal with an insane and cruel society.

Interestingly, as a direct result of their training, professionals who take on this bio-technical perspective of suffering tend to perceive their patients in less human terms.

The doctors get paid, the insurance companies get kickbacks, hospitals thrive, and individuals frequently become lifelong users of a system that increasingly ignores relationship over that of technical, supposedly “sophisticated” interventions that often make things worse.

Despite all the proclamations that mental health professionals are experts and that treatment has advanced greatly over the years, we are no better off than we were 100 years ago. Further, disability rates have risen, suicide continues to rise, diagnosed mental illness continues to rise, and, well, people are just miserable.

When 45,000 people a year would rather die than live in this world any longer, it might behoove us all to consider what is happening in the world to cause this.

Perhaps we can stop blaming individual defectiveness and poor genetic stock, and start acknowledging that our society is sick. Perhaps it’s time we do something different.